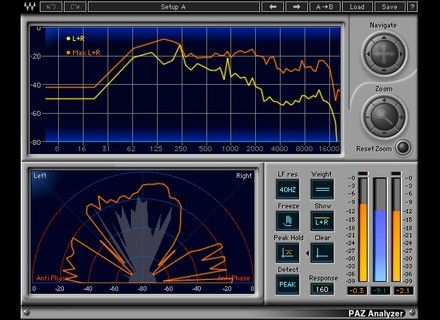 Waves PAZ Analyzer
4
The Waves PAZ Psychoacoustic Analyzer is a plugin meant for monitoring the frequency of whatever track you put it on in your DAW. It's a nicely written plugin that's included in the Mercury, Horizon, Diamond, Platinum, Gold, Silver and Sound Design suites. It's also compatible with both Mac and PC, so nearly anybody can use it. The plugin itself doesn't really need a manual as it's one of the more simple plugins that Waves has to offer. Basically, there is a design on the screen that allows you to monitor the frequency of the track you have PAZ on. This can be either an individual guitar track or the entire mix. Once it's on, you can freeze the analyzer to see exactly how your mix sounds. The tool itself is used only for monitoring, and they're extremely helpful for fixing any overlapping frequencies that are being bundled up, adjusting the mix to suit a particular frequency or even to see what frequencies aren't being used that much.

Waves plugins can sometimes look a bit dated, especially on an OS like OS X, but the performance of them has always been fairly stable. There's an issue with it working only in 32 bit in Logic, but Logic has a built-in converter that'll automatically launch it in 32 bit so you don't have to convert the entire program to run it. It's basically acting like a wrapper to run it in 32 bit instead of 64 bit. I've never experienced any crashes with Waves plugins, and they've saved me a couple times during various mix downs. To top it off, it doesn't require a ton of memory like certain other programs. Then again, this is something you usually don't just leave on your bus as it's not necessary to have it there for the final bounce.

I actually find myself using the Logic Spectrum Analyzer more than this simply because it's a little more convenient than scrolling through the entire Waves plugin list to find this. The fact that it's given in basically every Waves bundle proves that it's a necessary plugin, but it also proves that a lot of today's DAWs already have something just like this built in. That said, the plugin is very stable, it works as advertised and it is extremely easy to use.
Did you find this review helpful?yesno
»

Waves PAZ Analyzer
5
The Waves Ltd. PAZ PsychoAcoustic Analyzer is a metering plug-in system designed for mixing and mastering purposes. You can monitor the frequency spectrum, stereo spread, and RMS and peak levels all within this one plug-in. I wasn't involved with installing the plug-in since I don't own it and have only used it in a professional studio where I was working. I didn't need to do much to understand the interface and everything going on with the meters and graphs, as it's pretty self explanatory and easy to understand. You can zoom in on the frequency spectrum graph to really see it up close and personal, which is really cool. The rest of the graphs and meters aren't complicated either in any way. A manual probably isn't necessary, but I haven't looked at it so I don't know anything about it's configuration.

I don't own the Waves Ltd. PAZ PsychoAcoustic Analyzer, but I have run it in a professional studio running Pro Tools HD on a Mac desk top with a whole ton of power. We never have problems running plug-ins really, so running it on this system isn't exactly a good judge of how well this plug-in will run on a given system. However, most users won't have a need to run more than one of these at a time any way, so I'd say that as long as you're able to run plug-ins currently without it taxing your system, you'll be okay with PAZ.

As far as collections of metering for mixing and mastering purposes, the Waves Ltd. PAZ PsychoAcoustic Analyzer is about as complete as you'll find one. I use IK Multimedia's T-Racks 3 Metering Suite in place of this at home since I don't own this plug-in, but both are definitely comparable. PAZ will cost you a bit more, but it definitely has a more in depth frequency spectrum chart with more options for viewing in general. If you're doing a lot of mixing and/or mastering, something like PAZ is a must have and you might as well go with something from Waves who are up there with the best when it comes to plug-ins...
Did you find this review helpful?yesno
»

Published on 03/26/16
Today only, Waves offers special prices on two individual plugins and one bundle.