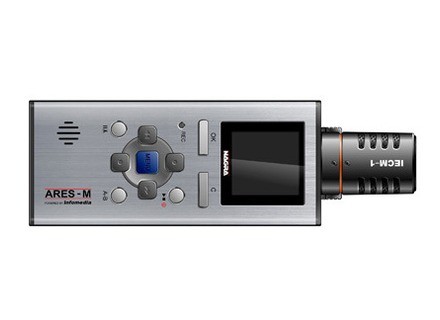 View other reviews for this product:
I use this model for 1 year.
I used to record comments on topics TV on Final Cut Pro when working at home. Other uses: for personal, but still common, for comments, itw (interview) and the radio taken from ambient sounds (sea, city, bars, traffic, demonstrations, etc. ...).
Goodies: Sennheiser MD21 mic with it forms an explosive couple (stamps, presence, definition), once familiar with the manual's format is useful.

The slight inconvenience: the capsule microphone mono input range is downright mean, it took me some time to replace the original BWF formats by the wave format (now that the operation has mastered this could happen in the blink eye) at the beginning I was very afraid of having sound problems were finally due to inappropriate settings for my use (the preset for nagra capsules intersect at 100Hz-20kHz, I have extended to 20Hz -20kHz in order to find a good balance), the headphone output a bit limited if you are in a noisy environment, in short, that if the details ... usb1 is not a great warrior but more than enough, I've never had a pb with the display, which apparently is not visible sometimes in daylight. It said.

Failure: too sensitive to perturbations of phones. I can not say that the tape is concerned this may be microphones. But damn how many recordings "failed" because of interference from a portable vibrating, ringing, or someone talking nearby ... unfortunately this is becoming more common.

Compare the early models used sony, marantz on k7 I find fun to use the MD21 microphone. This became impossible with the sony dat or minidisc general public (whistling, blowing on R). Few comparisons, except with the Marantz PMD660, fine, but unremarkable sound, plus the SD format does not interest me pas.J 'avoids get into the purchase of the unstable or too confidential. It's part of my criteria.

Sound:
- With the capsules, very defined, acute marked?, Picks up (too) sounds around in a itw, good stamps, what I call a natural, meaning that each of the voices captured during ' itw one is very different then with other sets voices were less differentiated
- With the MD21 you'll understand I'm in heaven!
The value for money has never seemed extraordinary in nagra ... that's not the question.

This tape is not everything. I chose it because it is oriented on for the press. This suits me perfectly. I understand those who prefer more traditional tape recorders with XLR, 48v, etc ... If I had to make a work of pure sound engineer I would have oriented marantz or tascam (with the cost of the microphones provided) . Hello budget, I end up with a good sound, a stable release, complete with a magnetic capsule kit (mono and stereo) and frankly use plug and play.

A choice without regrets.
See the source
Did you find this review helpful?yesno
Cookies help us improve performance, enhance user experience and deliver our services. By using our services, you agree to our use of cookies. Find out more.