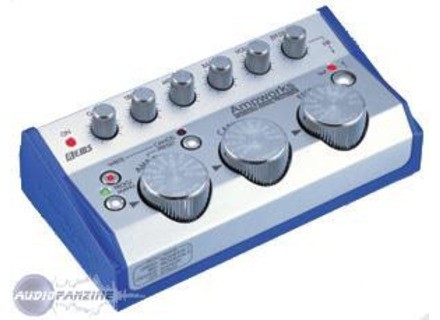 All user reviews for the Korg Ampworks Guitar

Korg Ampworks Guitar
4
This is a digital amp modeler. This thing cannot, unfortunately, be updated through a Mac or PC, however a MIDI controller can be purchased to control it more efficiently. This unit is not rackable. It has MIDI connections as well as a 1/4" input and output, and comes with a power adapter, though I'm not sure off the top of my head what voltage it is. This thing models a wide variety of amplifiers, mostly of the tube variety but with a few solid-state thrown in for good measure.

I don't think that there is much difference in quality between guitars with this guy. This is mainly because I don't think it sounds very good in particular. Of course, it's better than most affordable plug-in amp modelers, and it's better than the average outboard amp modeler also. But I've always felt that those machines were lacking. I would only recommend this for those who, for whatever reason, can only record direct. I still believe that recording direct isn't really the best way to go, unless there are extenuating circumstances (neighbors, family, roomates, finances, etc.) That being said, for all of those whose situations were just described, I'd have to say this thing is worth checking out. The Vox AC15 and AC30 imitations are pretty good. The Marshall stacks are slightly worse, but still impressive. I don't even like the remainder of the amps, nor do I like their real life tube or solid state counterparts. Even still, the imitations are worse.

I like the ease with which one can find a tone that they like, and I also like a few of the amp imitations as they aren't too bad. But for the most part, this hasn't done anything to shake my stubborn anti-digital amp stance. Only the insanely expensive plugins have really worked for me, and even then, they were only impressive when recorded with other MIDI or digital instruments. If this is what you plan on doing, try it before you buy it, because I'm not sure it's the best way to go.
Did you find this review helpful?yesno

2 programs for personal memories, almost 3 since the manual is
also remember as we go back on it, cycle through the options
with a pedal properly.

Power supply: 2 AA alkaline batteries or AC adapter (4.5 V DC)
Bravo! Finally something that does not work with 3 or 6 batteries!!
this allows to easily use rechargeable batteries on the go

The effects are very realistic and can be a good idea of ​​what gives
a chorus, a flanger, etc ...
They are all usable and well suited to the guitar, the tremolo is really nice,
the depth setting can make it "chopped" by against the Tap Tempo
does not sync perfectly with the music, it shifts
after a few steps, I think only a few Midi sync address
this kind of problem!
Effects all have a side "old" (as stated in the manual) and sound
rather "vintage" indeed! precision: one can not use one at a time!
Noise gate very effective if not to gain in depth on some
simulations, it makes you want to buy one ...

Cons: tone controls not effective enough, two user memories ...
with such a choice of amps and speakers is a shame!
We can only use one effect at a time!

Good quality / price, 80 euros for buying this model is discontinued ...

Good choices can be a good opinion of effects, amps and speakers simulated
against by a little disappointed at first because you always imagine that this kind of device will offer us
sound AC / DC, Clapton, Dire Straits, Metallica, etc. ... on a plate, well NO! is fun,
simulations are good but it was never a big sound with this kind of devices!

In order to work against the sounds of his guitar (the original sound is well respected)
explore different types of amps and speakers, take it anywhere, make nice models,
play with headphones, etc. ... here it is pretty awesome and I do not regret this purchase!

horsforfait's review (This content has been automatically translated from French)

Yes rgler effects are simple and effective, it is not a POD XT, but the sound is l. the advantage over a POD is the simplicity of use, 3 knobs turn and hop the case is in the bag.

PEIT is a very practical device that has the sound without straining. Do not seek whether this or that perfectly matches the original simulation, it is not the end, each simu lation amplifier remains in the mind of the MODEL is simultaneously the principal.
My regrets:
-2 Memory (that lean)
-Effects can not be combined
Strengths:
-Size
Russias-simulations
Good-crunch and distortion sounds
Did you find this review helpful?yesno

Korg Ampworks Guitar
4
Prampli "pocket" guitar with amp simulations and various HP and Varis and a small section of effects (rverb, chorus, delay, phasing etc ...) that uses the mod Lisati numrique "REMS" effects and amps Korg. 2 + memory rglage the current, so 3 sounds IMMEDIATE available via a button on the front panel or foot switch (for tinkering is not included). Connectivity ultra-simple: between output (2 levels) and "footswitch." Aesthetics sober, nothing to do with colored beans (Pod or V-Amp)!
In view of the uses of the vehicle would be missing an auxiliary input (CD player or rhythm box) to make it perfect.

It is difficult to be easier, no need to notice!

Not having at hand the prestigious amps it is supposed to reproduce it is difficult to comment on the ism of imitation. But we get good sounds and always enjoyable Difference ear. The diversity of possible sounds (from jazz to rock very clean "saturax") is more than sufficient to cover all needs. The basic sound of the guitar is well respected, which is rarely the case with the Goofs "modlisation numrique".
The effects are a bit "shy", not cumulative (except two), but not natural dsagrables and trs. This is not a multi-effects, almost total amps offering gure that rverbe and sometimes a chorus that choice makes perfect sense.

This machine is clearly Designed to use two well particulires: for the "BPS" with headphones without interfering neighbors and to connect directly to a console or sound recording. In either case, mission accomplished, plus it is tiny and does not take place in the bag or tui guitar, it can have on hand at all times. Too bad for the "BPS" we can not connect over which accompanied or simply keep the measure!
For use on amplifier "guitar" you better have something extremely neutral, if not multiple rglages to "walk on the feet" with a rsultat dcevant. It is prfrable to use a speaker amplifies or better yet some amps made specially for this kind of hardware (Pod or other). Found in a EAR or Tech 21, but with just a SETTING THE volume, they are also expensive amp or almost a "normal" ... However, your exact worth it, it's a combination that makes sense.
Finally, too much when it came out it is now coming in 90 and nine is a good deal!

dafonk's review (This content has been automatically translated from French)

The edition of the sounds is ultra-simple
The manual is well done.

The sound of POD in a lot less.

I use it to train.
Sr is a substitute for an amp tubes!
I sold my POD which I found the sound too much clutter.
Report qualitprix excellent, 90 euros is given.