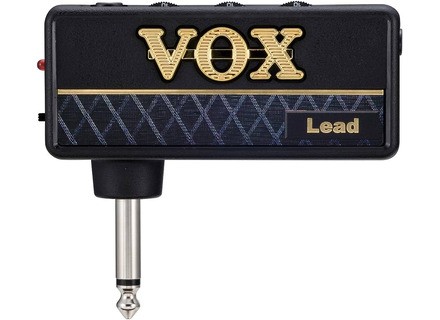 All user reviews for the Vox amPlug Lead

Average Score:4.7( 4.7/5 based on 7 reviews )
Not satisfied with those reviews?
Our members also liked:

Vox amPlug Lead
4
This might be the best sounding of the pocket amps. It has a great voicing geared for lead playing with the added digital delay within the unit. The sound mimics the tone you would get from heavy loaded amp stacks tailor for metal and hard rock music.

* Plugs directly into your guitar
* AUX in jack lets you jam along with your CD/MP3 player
* True analog circuit faithfully simulates the response of the original amps
* Voiced for lead guitar; includes digital delay
* Up to 15 hours of battery life with supplied AAA batteries

For me the tone from the classic rock amplug is similar to this one but with the added midrange for the lead tone as well as the digital delay. There is a little more gain added to this one as well. It has a great tone and voice for hard rock and metal. You don't have to play rock with this though, just roll back the guitar's volume and then the thing cleans up a little bit and has more or a low gain sound.

This thing has a rich and warm heavy gain tone that is great for single not lead playing. It works well with rhythm playing as well. It sound good not matter what guitar you use with it. I prefer a Superstrat or a regular Fender Strat so you get that sweet sizzle and not clarity.

A fantastic pocket amp that can go anywhere with you. If you need a quiet amp that will be silent for practice jamming in your home or office. Just close your door and grab your guitar along with your headphones and you won't disturb anyone around you.

At new these units come in at around $50 which is a great price for something of this quality. I recommend thise device to anyone who need a to go amp that is silent and fits in your drawer.

crisesse's review (This content has been automatically translated from French)" Genial"

the sound quality is amazing to see demo on you tube this little simulator has not a plethora of sound palette I mean by (the light refrain), but otherwise the rest hard rock and blues well muscled no problem singing it very musical I sometimes use a classic SansAmp I just put before and I can get a clearer sound lighter but frankly it's a killer

Vox amPlug Lead
5
gain
volume
tone
taken to
headphone jack
delay included! (An echo)
can connect an ipod eg mp3 and play with his guitar above +
it is for work pieces in the evening etc.

perfect
everything is simple

there is a huge gain!
suitable for all rock music, hard rock, heavy metal, but it is not a sound dug special metal
No, it's still rock high gain

few years
I compared with the Satriani model that gives his sound, but there is less gain
here are a lot more gain, it is not comparable because it starts very early in the race gain
for me, it's perfect
it surely has a mandatory background noise still
you can really have fun with

No need for manual

There are two possibilities: the pure distortion with the sound of the Vox or with delay distortion for leads

it sounds very good, I am fortunate to have a good headphone (Beyer Dynamics)

I use it for a few months

Muzink77's review (This content has been automatically translated from French)" A must have!"

I think we can do more simple, it's marketing vox: More and play!
3 settings (gain, tone, volume), a button for the delay and that's it. A manual? no need!

So there I think I fell literally on the ass! I think it mimics a Soldano slo100, amp unaffordable even in my dreams, and the sound is incredible. The headphone is not bad but try to connect it to PC speakers, hifi! A pure lead sound full of sustain, great delay (not adjustable but perfect as it is).
To tell you is so convenient that I left out my peavey ultra randall more with vintage in 30 to directly connect this little trick in my sound card and avoid going through the SM57, the direct sound and without tedious adjustment to register!

The great thing also is that I can take my guitar in my business school and my work ranges during breaks (chiantes to die) without disturbing others. I also have a small office with but it sounds pretty good but not bad toy to show friends what you can do! The only catch is that you can not have a real clean sound (especially with the humbucker, it's always a little crunch ... it's really the only complaint.

I use it for 2 years and it's like the iPhone or IPAD to Steve Jobs, a "revolution"

The only concern of the vox is also its fragility. I had the misfortune to drop it 2-3 times and it stopped working in loose contact with mono ... I had to buy the same Alrosa I could start the collection ... Be very careful because this is the plastoc. I put 7 to fragility.

Froideval's review (This content has been automatically translated from French)" Incredible!!"

Vox amPlug Lead
5
Amp simulator. See if ever the technical details on the manufacturer's website.
In terms of material quality .. it's all so plastic handle with delicacy.

Can no longer be easy!

I have a lot of stuff and I had preamps in the hands and ears ... and I must say that this amPlug is absolutely incredible.
The palette of sounds is surprisingly wide and 3 "knobs" are devilishly reagents.

However, it should forget the sounds called "clean" ... no wonder also a version for the Lead. But we go from crunch to lead sound good without problems.

It sounds and nothing else. I use in computer music directly plugged into my soundcard Presonus. I just posted a small demo on Youtube


Connected to a headset ... I find the same quality than through my sound card ...

For those looking for a preamp architecture simple but effective and cheap ... I think there is no better. No need to fiddle for hours ... It sounds right now ... it's AMAZING. Obviously the patch is still the same (outside the saturation level) and you have to forget the delay ...

POD xt, Vamp pro, Sansamp and others do not do better in my opinion .... The frequencies are good and perfect texture.

It is certain that I will pay the entire range (except perhaps the version Metal) ...

So in my case it is the foot.

djcarlcom's review (This content has been automatically translated from French)

Vox amPlug Lead
5
Amp headphone, running on batteries, the amPlug series.
This model is distorted, and has a delay, not adjustable, but you can disable it (fortunately, I'll be back over there later).

In terms of connectivity, we have the jack that will plug directly into the guitar (logic), a headphone jack, and an input line-out.

As mentioned above, there are only three knobs, not enough to tear his hair.

The switch of power has 3 positions: OFF, ON, and FX. This last position activates the integrated delay. Unfortunately, it is not adjustable, so it limits the possibilities pretty quickly at that level.

For the manual, well ... an A4 sheet folded into 4 slid into the carton, which applies to the amPlug Lead and amPlug Bass and ...

Good point, one set of batteries comes with the device.

on the other hand, it's really an amp to work at home, quietly, without making shit neighborhood.

If you expect sound to a room by plugging the line in an amp, go your way!

The sound is okay, it can play, have fun, and all this without interfering with half the house.

I play mainly metal, thrash instead. The settings are fairly easy to find, and we quickly get what you want. I rarely exceeds 4 on the gain setting.

If you want a cleaner sound, then on the other hand, we must put the gain to 1, maximum 2, with volume and play the guitar.

I noticed a breath when you go up the volume without playing. It is covered by the sound of the guitar once you start playing, so nothing dramatic.

I have not used for cons of using the delay. It can not be resolved, I still have not managed to get something to correct, apart from big shots rockabilly. But again (and I really over there), I'm really not used to manage this kind of effect!

I bought it last night and I had to play 3 hours total with him. I bought it because I already had the amPlug Metal, very typical, and I wanted something a little more versatile. At this level, I'm not disappointed, it happens without too much effort to have clean tones, crunch, distortion ...

The feature I like most is the possibility of playing without having to turn a big amp, and especially to play without being too crowded and without breaking the ears of the entire house.

What I like least, that's really what delay ... It puzzles me, and I think that a fourth knob to adjust even if the "tempo" of the delay was not too ... but as said above, I am not a great expert in the use of delay (not The Edge wants ...).

I still think that I would do this choice because I love the sound (without delay).

In addition to 50 euros, we will not be ruined!
Did you find this review helpful?yesno
Cookies help us improve performance, enhance user experience and deliver our services. By using our services, you agree to our use of cookies. Find out more.