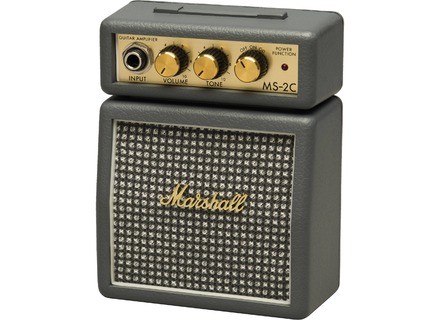 View all offers for Marshall MS-2C »

gvinocour's review (This content has been automatically translated from French)

Incredible (for the price)

2 days
Did you find this review helpful?yesno
»

KalashNICOv's review (This content has been automatically translated from French)

Marshall MS-2C
5
2W amplifier transistor
Two jack inputs: one to connect the guitar and the other to connect the headset
Rglages trs basic:
Volume -1
-1 Tone (used Galis, bass to treble by turning it clockwise)
-1 Off / On / Od (3 positions): You both sound clear and the saturbr Od />
A good look, really like "big rapetissquot;, I really like.

Nothing complicated with three buttons, it's almost as simple configuration that the guitar that has hands.

The good sound, do not you get it not RVer. It is a trip huh amp (see below). Only the day on I reu, without reading the leaflet that goes with it (no manual), I fiddled two or three things and I fell from the sky: it's really easy to get a sound that can compete with some combo of my knowledge.

As I've dj said, the manual is a résumé leaf in several languages ​​to tell which button does what (as you say that quickly made the rounds).

Obviously it's not so good a JTM or JCM its level, but it's an amp so we'll travel into perspective:

Personally, I find the sound a little "indoor", it's hard to explain, but there is a lack of middle and treble quite significant, however, that we can fill some of the Tone knob, (partly only) and put it on his cot trs is simply good, I take a lot of fun playing on this amp, as much if not more so than on my Fender Frontman 15R is in part the fact that I can run around everywhere, but not limited to, believe me this amp for its price is thundering.

I currently only jou with my squier affinity, but I look forward to plug my Gibson Contents dmontrer to give what he does, the guy. Anyway, I can tell you (with my jou for years on a Squier Frontman 15R) trs sound is good (I told DJ I think) to as an amplifier has the almost same comparison would tend to him as to the fender.

I play casually and blues-rock/hard-rock was I like. Well it's not a "real" Marshall, of course, but try to take a JCM and baffle in the car of a friend to go on vacation

Likes: size, weight, price, its looks, its ease of use, its (relative size)
I like least: the sound (at all), nothing else.

Bought a few weeks ago on a whim, I have no regrets, it is extra.

The report price is trs good quality, and if you do not have speakers for your MP3, be aware that TRS also performs this function.

With exprience, I would do so this choice.
Did you find this review helpful?yesno
»

thorpedo's review (This content has been automatically translated from French)

Then, really surprised
I was expecting a sound at the height of its size and the look of a gadjet 38 euros, so too rotten, especially if we know the combo Marshall MG series transistor which are real stews
it's quite surprising, a nice overdrive, very marshall, which sounds high for this small, quite creamy, cool
same for the clean, less surprising, but still.

To be at home to look, Gadget and especially the sound!

Marshall MS-2C
4
On the menu: a small transistor amp with a power of 2W, a selector to select the channel, a knob volume and another tone.
Note also that it has a headphone output which can be useful.

Difficult to make simple, the pallet of sound is quite limited anyway, it could get away with adjusting the amp in the dark.
The manual is anecdotal ...

The first channel provides a little crunch, lack of clean ms2 is unfortunate but makes up for the second channel, one is left with a small friendly disto whose intensity varies with the volume.
I play mostly on the second channel with the volume turned up, the sound is relatively good (for an amp of this size) in the registry rock, shame not be able to qualify for avanatage with the tone.

I use it for several months, occasionally of course, because the amp is quite limited, both in terms of volume as the types of sounds available.
It is regrettable value for money a bit limited for a product that is a gimmick rather than a real amp, of course, the look is cute, but you pay a lot mark. Too bad as not having a real clear.
Did you find this review helpful?yesno
»
Read the 6 user reviews on the Marshall MS-2C »