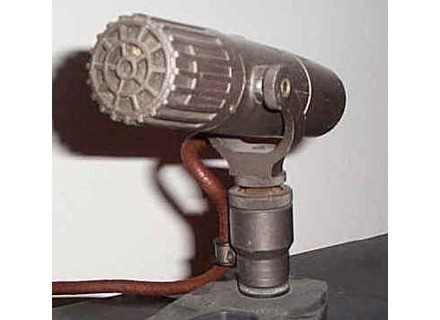 Rca BK-5B
4
The RCA BK 5B mics are rapidly becoming my new favorite thing, so I was really psyched to try the MXL R44 ribbon microphone. It works the same as any other ribbon microphone, and its just as fragile as any of them, so be careful using it. Definitely don't use it for live gigs, or anywhere outside the studio. Make sure especially not to accidentally turn on phantom power, as the ribbon can not handle it, and the mic will be destroyed.

This is the first BK 5B I've used that I wasn't absolutely in love with, but that's mainly because I've been fortunate to use really good ones. I like the sound of this on vocals, as well as a drum mono overhead. I also really like this microphone on horns, and string sections (or individual strings). There's really quite a wide variety to be had with ribbon mics in terms of which instruments you can record with them. I will say that this particular mic doesn't work too well on distorted guitars, at least not on its own.
This one isn't bad, and it does work just like a ribbon mic, but it doesn't have quite the warmth or feel of a good ribbon. It's still a decent mic, and when you consider the price of it, it holds up pretty well to its counterparts (like most MXL mics do, considering they are pretty cheap overall). I doubt I would want to use it in the studio as much as our Reslo ribbon mic, but I would certainly consider buying one for my home setup at some point, if I can't afford another ribbon (or I don't think it's worth it). I'm spoiled in the sense that I get to work in some nice studios where there are nice mics a lot, but for those of us who aren't as lucky, there's affordable, solid microphones like this one.

Rca BK-5B
5
The RCA BK-5B is a vintage ribbon microphone that is designed for broadcast and studio purposes. I've only got experience using the mic in the recording studio, but I do believe that the original intentions for the mic were for broadcasting. The mic has a cable attached to it and also comes on a small mic stand that is made for putting the mic on your desk. The mic has a uniaxial pick up pattern, which is similar to a cardioid pattern but it also picks up sounds from the side and from the side. It will pick up frequencies between 30 Hz and 20 kHz.

The RCA BK-5B is definitely a great mic to have around the studio. It's kind of a like a really thick sounding Shure SM57, as it seems to work well for similar applications. Although it's physically thicker and larger than a 57, it has the sound to match. I've used the BK-5B for a variety of applications including for recording kick drum, snare drum, vocals, and electric guitar. It's definitely versatile enough to be used across the board, but these were the applications that I got a chance to use it for. Even though it's a ribbon microphone, it doesn't sound like a traditional ribbon microphone, although it does share a low output level. I don't really know what kind of price the BK-5Bs go for used these days, but I would imagine that they would be about mid level. You definitely won't see too many BK-5Bs out there, as I've only seen the one that I've used before. They probably didn't make too many of these, but if you are interested in vintage ribbon microphones that aren't as expensive as other vintage RCA mics, the BK-5B is something you should definitely be aware of.