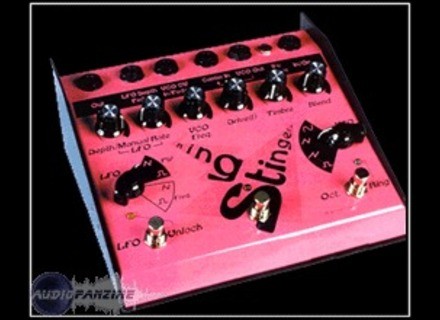 Lovetone Ring Stinger
5
The Ring Stinger serves as an octaver and ring modulator. There's switchable waveform modulation via LFO that goes with the octave/ring modulation.
The front panel features an in jack, 9VDC jack, VCO out, carrier in, VCO expression, LFO depth expression and an out jack, in addition to the controls of blend, timbre, drive, VCO freq, depth/manual, rate and the waveform selections for the two sides of the pedal.
There's a master bypass switch along with a footswitch that switches from octave to ring mod mode. The footswitch on the left is for adding in the LFO modulation.
The pedal is all analog and is a very unique/versatile circuit you won't find in any other ring mod/octave pedal.
Build quality is killer and the previous owner was using it with an AC adapter rather than a DC adapter. A testament to the design, all I needed to do was recalibrate the VCO and it worked perfectly when run off DC.

Setting up usable sounds is near impossible without the manual. As is calibrating the VCO to sound it's best. Just in case you don't have one, I've placed a video up on YouTube called "Calibrating the Lovetone VCO". The process is quite easy, though you wouldn't know to do without an explanation.
Without the manual, I was only able to get a nice octave sound. The ring mod is fairly tricky to dial in to work well but the manual explains it fairly clearly and gives you a general idea of what everything does, if it does overcomplicate some things.
The LFO mod is easy to use though. Depth/rate and the wave shape are very self explanatory. Unfortunately it only does stuff with the ring mod mode switched in.
To further complicate things, some of the knobs have different functions in different modes that are different than what they're labeled. Again, if you read the manual it's a bit easier but otherwise you're left to fiddle with it until you find something usable. It was quite frustrating when I'd dial in a good ring mod sound with the LFO off and then turn it on and turn the knobs only to turn it off and find my perfect ring mod sound was gone.
The set up is the same as any other pedal though. If you can't make it past that part, there's no hope for understanding the rest of the pedal.

I tried the Ring Stinger with both my Strats into my Flexi 50 and a Yamaha keyboard/workstation into a Roland amp. Once I figured out how everything worked, it sounded killer no matter what situation I put it in.
The octave mode is very Hendrix-y. Nails those Purple Haze octave tones, though it can do so much more it's almost a shame to only use it for that.
The ring mod mode allowed me to get some classic Jeff Beck type tones as well as mindless robot noise, regardless of the instrument I was running it with. If you've never experienced mindless robot noise, it's a complete blast and you can lose yourself for hours in it. As far as practicality, it doesn't offer much but a robot breakdown is a cool addition to any song.
The LFO mode adds some more over the top modulation on top of the ring mod, giving you very cool rhythmic effects that can be either smooth or choppy. It also offers a pitch mode that can make your instrument sound like a spaceship and in conjunction with a volume pedal and delay or two will give you some incredible ambient sounds.
You can even get some rhythmic synth type sounds with the VCO frequency turned down in ring mod mode. This is very cool for simulating an electronica breakdown in the middle of a jazz tune.
Needless to say, this pedal probably isn't for everybody.

I absolutely love the wide range of sounds I can get from the pedal. Every mode sounds killer once you manage to dial it in and it can easily replace at least two pedals on your board (and it better because it's quite a large pedal).
I hate how complicated it can be at first. The learning curve is definitely steep. Once you figure out how everything works, it's actually fairly simple to dial in the sounds your looking for.
For the price I got mine for, it was a no brainer to pick it up. I wasn't even really looking for a ring mod/octaver/noise maker but I grabbed it anyways hoping to learn a bit about it while fixing it.
However, for the price they go for used and the price I sold mine for ($1000+), I'd be a bit hesitant about buying it unless I know it's exactly what I want and that I'll utilize it frequently.
Consistency of sound is a bit tricky. If you're using a regulated power supply, you're all good. If you choose to use a battery, you have to recalibrate the VCO as it drains or suffer sub standard quality effects. Not a big deal since the process is so quick but it is an incentive to pick up a decent power supply.
If I could get another for the same price, I'd pick it up in an instant just to have around. For $1000, I'll pass.
Did you find this review helpful?yesno
»