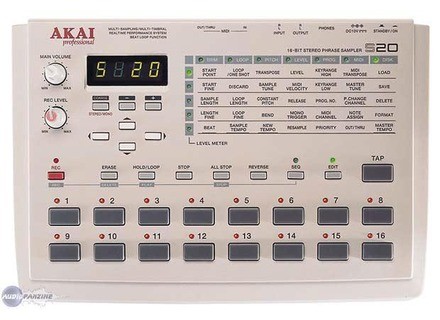 Akai Professional S20
4
Aimed at DJs and home studio hobbyists when it was issued, the S20 was never one of Akai's sampling flagships. But it's a humble and efficient performer that still sounds great, and is one of the easiest and therefore most immediate and satisfying sampling experiences going. So simple to get a great loop going quickly and augment it with further samples. The four track recorder thing is almost impossible to use, and there's nothing in the way of filters or FX, but otherwise it's still a useful tool. Somewhat surprisingly there's been a recent return to basic, hands-on hardware samplers like this, including from Akai.
Did you find this review helpful?yesno
»

Easy to learn,if you don't know nothing about sampling it is easy to use

For a little machine it is really good sound 16 bit conversion,that's cool

That's really ok,i use it since 1998 i think and all the 16 pads are supporting my strong force pushing on them ha ha ha.Floppy disk works well i have never send it to revision

I love it cause he is too small,you can only looping and that's all, no effects it like on an mpc2000 i suppose 16 banks in real time.cool lot of fun with this little volume machine.

AlexPalmito's review (This content has been automatically translated from French)

Super easy to use, friendly and playful even (I was me tore the hair on the S3000, the it is a pleasure !!
the parameters are very basic, no effect or filter, suddenly we sample and that's it !!

Converters are not very transparent sound but very well !!
a small grain Akai, I love, and I've always been surprised by the sound of this little box ... it does !! (And thankfully, since there is no cure for catching lol!)

I use it for at least 5 years, and I am very happy, or the S3000 had disappointed me with its complicated edition, well, everything here is easy, I think I have opened the record and I have fun rather well.
For sound it makes really, this little machine has a super grain !! (It's not for nothing that I have not bought other sampler!)
S20 enough for me, I think 500 euros to invest in a "real sampler" and then spend hours has created programs, key split etc ....

a small flat for backup to disk, bit boring and long but its only defect !!

quality interesting price in my opinion and in my opinion more it will soon collector !! (So ​​it's going to not be last!) I do it again this choice without thinking, if you are looking for something simple and not making head then buy a S20 !! plus it sounds !!
Did you find this review helpful?yesno
»

eric82's review (This content has been automatically translated from French)"back to the future, very good sampler"

Ultra simple, this is what I wanted, so I had my first sampler income

one sample in two seconds what you want, we render in the next second, we can create ....... yes as true sentences sampled before, do true sampling,
before there 18 years roughly, I spent all my time sampler, I had the S01 s20 rack version of the first taff was creative recreational and this is again the case with the s20
since I can directly sample a sound that is automatically assigned to a pad, I Zique disseminates, or leaves turn vynil doing something else, I heard another sound that could give the first sample and I tock at the end I get a loop-shaped micro samples, taken from 10 or 12 different kinds skeud francis lai cut between a sin of skyscrapers bb king, same for the wagon, was the opposite of recycling or other result is creative, fast, nothing to do with recycling, integrated sampler reason or geist which require three programming sealed and let slip the idea .............. I returned to my first sampler and old gear for it, like what, tired of working on a single loop and replay the thing I wanted to work as before, quick and creative .......... it was a model designed for the base dj ....... so everything is intuitive sampler listen, copy, duplicate samples each and you can even give themselves a appercu with a mini 4-track sequencer, 90% of the time is spend creating, al "Unlike recent gasworks.
I hear something on my mp3 that gives me an idea, hop a cable rca, the machine turns 4or 5 seconds (real) ready sampler. in 10 seconds .... rest everything is ready to find the right sample,
basically there&#39;s not a twist of f ... to get a sound out ............. ah yes the samples are 8 bits in reechantillonable very good for allourdir kicks in 4 bits are massacred ca guitars can give you something like RZA of Wu Tang Portishead or genre or sound has DITC, tim dog ... opposes ..... a clean sound, like reason, if the 16 bit is valid it gives a sound almost conforms to the original. s1000 s2000 or gender

yes, if you play good converters with 8 or 4 bits resampling with some great positions I could get my meilleuires snare for a long time without taking cabbage, and frankly good clear box I put hours to find THE right snare on software ....

I really the snares I wanted&#39;m stubborn,
other things there is a cinch rca with an adapter rca / jack was € 5.6, if you have a preamp you can sample any rapidos instruument in 2 seconds, personal,
for delirium, sometimes I connect a mic and directly claper hands or use a box of matches that I shake, here everything is allowed (the idea is thought, within one minute may be executed only)
I retouve runaway, long ago which eventually disappear with time and strength parameter, convert, do wickedly ch ...... , There is more music by .......... against the
I took the one recovered vinyl box one soul and rock, a box mix alec constadinos a break bernard purdie cutting, and I bury any sound bank in 10 seconds,
Then we ask of you you&#39;ve found or ca?
ps: one thing I had not seen for a long time, the number of experiment is reduced to achieve a super function, passing from one function to another in 2 seconds. supported by simultanne or keys .... password are the guys who conceived such machinery mess!

I would do this choice I am again in 2012 14 years later ...... back to phondamentaux .... sampler of vinyl records, something that can quickly make a first appercu

what I love most: bah, we sample rapidos, propement, you spend most of his time clearly seeking an idea, rather than to parameterize, we can set an idea on the spot ....... as before .. there .. and if everyone in the world can propose his idea was quickly made, suddenly becomes the Zique it must be tripante merdikkkk sometimes, but creative ........ unlimited .. and if it is the 16 pads, but a good combination of 16 samples is already very well see: mpc 16 pads ..... if you like the sample and you want to go straight to the point, without taking the head, opt for this device, it will work extensively to the side of a sequencer to edit sounds (, eq, somp

Did you find this review helpful?yesno
»
Read the 9 user reviews on the Akai Professional S20 »