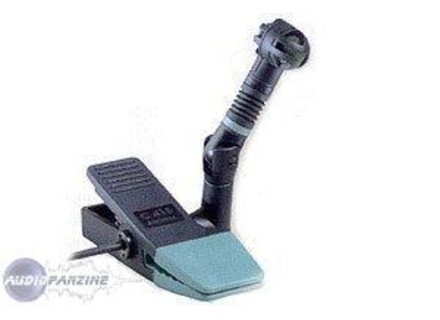 AKG C 418
4
The AKG C 418 is a clip on condenser microphone designed for use with drums. It can be used both in the studio or on the stage, but I have only used it in the studio. The clip and the built in XLR wire make it easy to place and set up on drums as well as any other instrument you can clip it on to. The microphone is built well and will definitely last for a long time if you take care of it.

I've been using the AKG C 418s for about five or six years, as they were the first microphones I bought to record tom tom drums with. I like them because of how easy they are to place on drums and because I usually get great sounding results with them. While I only use them for drums, they are suitable for any situation where you would need to clip a dynamic microphone on to the instrument. If you buy these mics within the AKG drum pack that comes with the D112, you can get a killer deal in terms of per mic price. In fact, this would be the only way I would recommend buying these mics, because if you buy them on their own they are way to expensive for what you are getting. The mics definitley have a good sound quality and its small size is convenient, but there are better sounding microphones out there for a similar price or cheap, including the Shure SM57 and the Sennhesier 421, which are both better choices in my opinion for recording drums. The C418s are also a great deal if you can get one used as they good for quite cheap on ebay. I wouldn't recommend these for the professional studio environment, as there are an array of mics that sound better, but for the project studio owner that is looking for a good price (used or within the AKG drum pack) and a quick set up, these are definitely worth a try.
Did you find this review helpful?yesno
»

lechauve's review (This content has been automatically translated from French)

AKG C 418
4
Supercardioid condenser microphone broadband and small cell, for miking percussion.
Possibly used on copper: I've never tried, but its specifications are suitable, only its mechanical properties can be relatively inconsistent discipline (cell mount a bit too short).

NB: my model is the C 418 PP, originally equipped with an XLR adapter for 48 VDC power supply ° GHOSTS.

The signal is very balanced, no need to mitigate the consoles on average or good.
Many of attack, and fullness and bass are there as long as we correct the (little) depending on the slice.

Oriented rather than live studio because of its side a bit flat (or dry), which does not perhaps to return any unwanted harmonics.

Accessible enough to buy secondhand and low price (I bought 7, between € 60 and 95 phr), the microphone no longer exists - a priori - by buying new.

I use it since June 2007, concerts, and so low intensity (10-20 times / year), sometimes snare (if difficult to put a clamp on M201N because of a hyper bass cymbals config and / or hit-hat), now always on the toms (except micro loans fabulous comfortably).

Most
- The width of the spectrum
- Directivity quite exemplary (micro very easy to manage, even with a gate Behringer)
- The ability to withstand severe pressure
- The availability of deep bass and accurate, despite the size of the cell
- A faithful reproduction of the attack without even tinkering media and treble
- The mechanical robustness of the cell (which is not obvious in appearance).

The small -: an adapter not included in the microwave, so connected to the cable end (end), to put off any shock or vibration of the drum and without suspend (reminder: cable end).
Beware of wild drops between sets.

The -
- 3D orientation sometimes a bit tedious on some drums (no gooseneck, but a double joint)
- The mini-screws of double articulation, check from time to time
- The (very) relative fragility of the cable into the microphone, especially due to the double articulation cited above and screws that can block (micro not to install, adjust and make a nag, I had to resolder tape and January 1 times before use, that I had lent least 1 screw, and so-called HS ...).

Tested models: SM57, AKG D330 BT SENN MD 421 (loan), BEYER M201N, BEYER OPUS 87 ...
SM57 dynamic range cell: to avoid, at least if one wants to finally try to sound wood ...
AKG D330 dynamic range cell: a bit soft, less precision in attack and low (but better than the SM57 in my opinion)
MD 421 dynamic range cell: incomparable, but (unfortunately) need special pliers + feet ... and another budget.
Dynamic M201N average cell: very good, but can not stand too large sound pressures, damage ...
OPUS 87 Cardioid static cell medium: not too bad for the attack, but unbearable in the low (and fluctuating too present) provide a good correction of slice and in noisy environment, a specific gate

Q / P: excellent for those who paid attention to his gear and makes no industrial use.

I would do this choice running ...