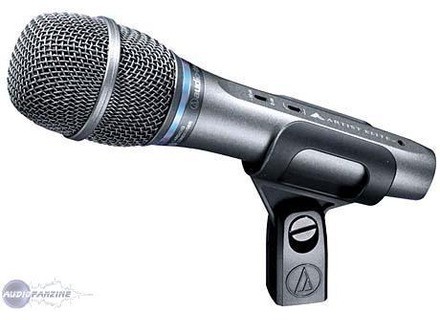 Audio-Technica AE3300
5
*Microphones are very subjective. Some microphones that work for some brilliantly may be disastrous on others. It is therefore important to understand the context in which this review is written and take it with a grain of salt, like all reviews on microphones should be treated.*

The Audio-Technica Artist Elite AE3300 is a handheld condenser microphone tailored specifically for live use. It boasts a relatively impressive (for a live microphone) 30-18,000Hz frequency response and a relatively remarkable (for a live microphone) Signal to noise ratio of 75 dB, with only 19 dB of self-noise. It is also capable of handling up to 147 dB SPL, before you engage the 10 dB pad that comes with the microphone! Before you even sing into the AE3300, you can take one look at the specs, and take one feel of the perfectly balanced heft of the microphone to know that it's worth the price one pays for it. In addition to this all, there is also a high-pass switch. And before I get off of the frequency: if you look at the curve, you can see a very clever dip in the sibilance range. Unbelievable engineering on Audio-Technica's part.

The AE3300 happens to have the same element as the legendary AT4033, which I have also reviewed. I said that the AT4033 is a rather picky microphone in my review, but the truth is, even if you wouldn't use it in the studio, if you could use it live, would you? Especially after it's been optimized for that use? I think most people would say yes to that one.

The AE3300 is an unbelievable microphone that exudes its value before you even sing into it. It is clear, it's defined, it's warm. It seems to know exactly what you want to get out of it. If you have the money, I wholeheartedly suggest investing in it.

Performing musicians spend unbelievable amounts of money on their speakers, guitars, pianos, cables, etc. Most of them seem to overlook the fact that they're singing into an SM58. It's not that I dislike the SM58; that microphone is fantastic. I just want to point out that your voice is an instrument just like any other, so it should be invested in, like any other.

moise69's review (This content has been automatically translated from French)" great"

Audio-Technica AE3300
5
This mic is monstrous for singing, song, jazz, beautiful color. It consists of the capsule AT4050.C 'is static.