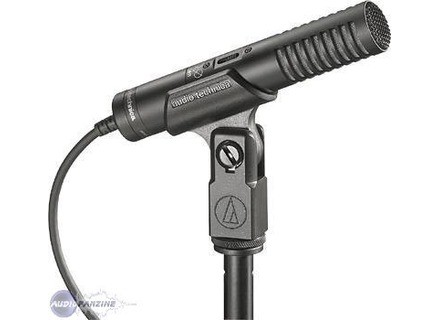 View all offers for Audio-Technica PRO 24 »

It works either with a button battery, or with the "Plug In Power" (a principle equivalent to the phantom power, but on a cable and stereo mini-jack with a voltage much lower).

The frequency response does not go below 100 Hz

I bought six months ago to save big band rehearsals. I plug in a Boss Micro BR recorder. The Micro BR provides power "PIP".

The microphone does not saturate. It gives a good stereo image. The sound is not fantastic, but it's much, much more convenient than making a couple of microphone and preamplifier.

On the micro BR, it is also possible to record in mono. In this case, the two capsules are "added" and directivity approximates a cardioid microphone.

I have not tried other models. With experience, maybe I'll buy a superior model: Rode NT4 or AT 8022, which can both be used as a nomad, but are both more expensive and bulky. But given my usage, it would frankly luxury.

BOFs:
- Lack of sensitivity
- Its not terrible

I would gladly put a little more money to have the same microphone, but with better quality components. Although