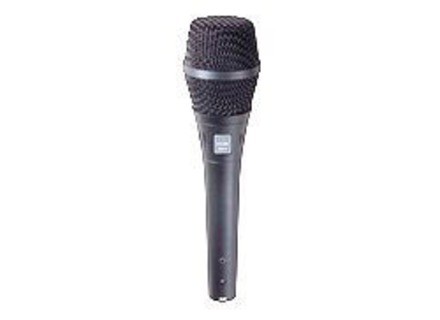 Shure SM85
5
Stage and home studio. Dedicated to the vote.
Condenser microphone, FET preamp and Class Cardioid. Power from 12 to 48 v, but I often worked with a small autonomous power 9v (a shure I think for that matter).
The output voltage was entirely done enough.
Show: http://164.109.27.207/pdf/discontinued/sm96.pdf

Made from 1982 to 1992. Will result from the SM86 and the current SM87a. I also have a SM87A, but because we no longer find SM85. Very rare occasion.
It is a rugged microphone, the voice made for the stage, but very functional home studio.
A beautiful medium, well-controlled proximity effect, a high intelligibility, high clarity, good elimination of parasites, feedback, pop, wind, noise and hand shock. More comfortable on the voices of women on the thick voice of the blues, but not unusable as long as it makes clear the presence of voice mixes in charge, it comes off, it remains stamped ventilated. You can get a sound close to the "studio" without difficulty. In home studio to sound rough it promotes a very nice sound, to 5 cm from the lips without proximity effect, supports large sound pressures, and laughs at the sound. In fact, today there are three high-class microphones for voice on stage, the SM87a, The KMS105, and Shoeps. I say nothing of Shoeps I do not know enough. Between SM87a KMS105 and is a matter of taste and range of voices, music, in my opinion. These are really great pickups, but SM87A, I prefer the old SM85 without hesitation, without saying that it is better than the Neumann. They are at the top, though different. To put it simply will favor the Neumann and Shure SM85 baritones and mezzo-soprano (it's still an image). The voice a little high and stamped, I find it easier. Let's say it depends on the voice, music, and mix the rest of the electronics. On stage it is neither more nor less difficult than 87A, it depends on the place of displacement and return of the singer. Basically he prefers a return rather than in the lateral axis.
I regret that this microphone is no longer available.