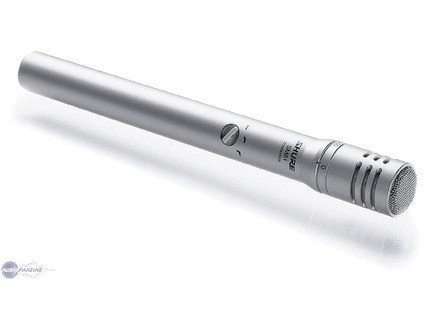 Recommended for those serious about acoustic, wooden music or anything that needs a full 20Hz-20kHz response.

Shure SM81-LC
4
The Shure SM81 LC is more than its worth. I had bought all equipment needed to start recording previously and so when I got home and hit the record button, what I got was a very clear and concise sound. I have a basic in-home studio set up in my room so I don't exactly have a "dead room" to record in but the way this carded mic picks up straight on sound and minimizes background sound is extremely useful and impressive.

If I had to make a complaint though, I would say that some times in the play back my voice would be distorted and some words would be completely unheard and at other times it would be completely fine. It's kind of unpredictable and its' really just a guessing game when you hit the play button. The mic is very bright, kind of harsh on certain type of vocals. On very soft tones it works fine, but if there's a heavier voice, it gets rougher. Compared it with other 300-600 dollar mics in my studio - good extra overhead etc mic for 100 bucks, but definitely sticking to my old mics for lead vocals.

I am very much satisfied with the Shure SM81LC microphone. I had been interested in MXL 2003 although while searching the internet I read that the V63M was designed in close association with the 2003. The stereo field is much more saturated than with Shure BG 4.1 that I had been using etc. There is more resolution on high frequencies. Much of the progress I have made in the past has been parametric with upgrades in recording components. The V63M is a cost effective solution for acoustic guitar.