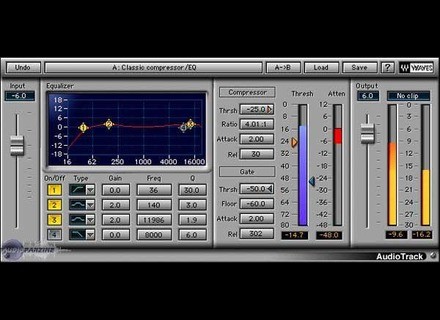 Waves Audio Track
4
The Waves Ltd. Audio Track plug-in is a three in one signal processor for your DAW. Included in the plug-in is equalization, gating, and compression and can serve as a starting point for just about every track, hence the name. It comes in every major Waves bundle and also comes as an individual for both Native and TDM systems. It's compatible across the board in terms of plug-in formats as well as for both Mac and PC platforms. Learning how to use Audio Track isn't hard at all - if you understand the basics behind each of these processors, you should be able to use the plug-in right off the bat. The equalizer is made up of four bands with gain, frequency, and bandwidth control, as well as the ability to set the slope which comes in handy if you want to use a band as high or low pass. The compressor has the standard controls for threshold, ratio, attack, and release, while the gate also has the same parameters. Lastly, there are input and output levelers and metering for threshold, attenuation, and input and output levels. There's not much need for a manual, but if you're a beginner I'm sure it would be a help.

I'm running the Waves Ltd. Audio Track plug-in on my home system and have also used it at a few professional studios that I've worked at, including the one I'm currently employed at. Primarily I use it at home, where I've got Pro Tools 9 and a Mac Book Pro with 4 GB of RAM and a 2.2 Ghz Intel Core 2 Duo processor. The plug-in doesn't take up much processing power at all, as I could definitely run one on every track if I wanted to. I don't have a need to do so, but if you were just starting your DAW this would be a good candidate for a single plug-in to do something like this...

The Waves Ltd. Audio Track is the perfect channel strip plug-in to get you started in the world of Waves signal processing. It's got your basics all in one place here in terms of EQ, compression, and gating, and you could definitely get away with doing a basic mix using just this plug-in. It's definitely a Waves quality plug-in in terms of sound, although the compression doesn't sound as full as some of the other Waves plug-ins. You'll get it with most of the Waves bundles, but primarily is useful for those looking to get Waves quality signal processing without spending too much money. The bottom line is that Waves Audio Track gives you a ton of bang for your buck!
Did you find this review helpful?yesno
»

Waves' special offers for this Saturday

Published on 04/23/16
Today only, special offers are available on three Waves products.