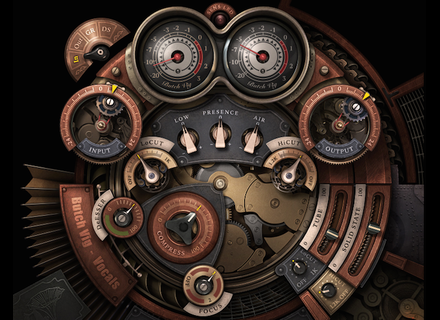 Fashion of the time is what it is, and one can think what one wants of it (always start with a deepest thought...)

In Waves’ Signature plugin series (Chris Lord-Age, Eddie Kramer, Jack Joseph Puig...), here comes one of the latest inventions from our friends the Waves Brothers, who seem to have decided to be true to their names in surfing on just every passing wave.

Fot the youngest readers who haven’t bothered to go and check Wikipedia, let’s briefly address the “Who’s that Butch Vig?” question by mentioning Vig is (or was?) an outspoken producer during that (temporarily) forgotten decade we now call the 90s.
From the Smashing Pumpkins to Sonic Youth to Nirvana’s legendary Nevermind, “the Butch” also and mostly was the brain and producer behind fusionist ephemeral sensation Garbage.

Here’s for the outline.
We first could wonder why such an anachronical channel strip would be developed – then thinking again you end up like “yeah, after all why not try and make a few extra bucks recycling famous names?” In the absence of Steve Albini drums, Jeff Lynne guitars, Trevor Horn synths or Brendan O'Brien grunge toolkit models, I’ve tried the Butch Vig Vocals.

First: the look. While we’re at it…

Although I have no remembrance whatsoever of a link between Vig’s productions and the steampunk universe, the GUI seems right out of a crossover between Borderlands et Bioshock. Nothing to do with the music, you’ll say – oh so rightly.

At least, this is a GUI that must have provided a job to a whole team of graphists! Why not after all: it’s much more fun to spend hours in front of a well-drawn interface instead of a factory plug-in that looks like cr*p.

OK. But soundwise, where does it go ?

In a nutshell, on a vocal track (let’s go crazy, huh?) recorded more or less correctly, there it goes:

A lot of Grrrrr, a pinch of Pshhhiii, quantities of Brrrr plus a touch of Fzzzzzz.

Nah, you frankly can’t blame the BVV for sounding either too transparent or thin – no chance it ever will be.

As with most of the aforementioned signature series models, this kind of processing is so hard-hitting that it’s hard to give a neutral review of it.


If you like the Buzzcocks, P.I.L, Transvision Vamp, Television or the Sex Pistols – AND you’re ready to change your wallpapers after the cat has scratched them out after merely listening to all presets…

No way to get anything defined with such a nuanceless processor, but for demoing… Hey, it’s so punkifying it might work!

A bit like with Beretta’s latest model: you need to have a use for it.

Published on 05/22/16
Today only, Waves offers special prices on two plugins and one bundle.