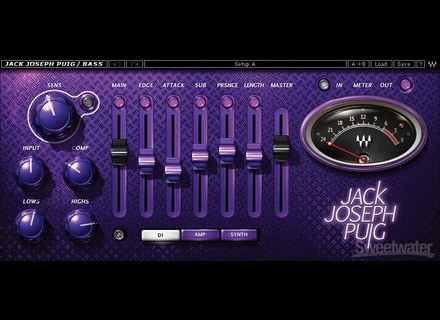 Waves Jack Joseph Puig Bass
4
Jack Joseph Puig is a famous, award-winning music engineer who's done everything from U2 to 311. Considering his popularity, it was only natural that he would get some famous mixing/mastering plugins, and Waves stepped up to build and offer them to the public. This plugin has different modes to select between a DI, amp synth, sensitivity, main, input, master, comp, low and high knobs, meter select switches to select different monitoring modes, center fades to select between edge, attack, width, sub, presence and length. There are tons of different features built into this, and it's a pretty unique take on mixing. Instead of adding tons of different EQs and compressors, this has everything built-in with some visual sliders to move instead of knobs to turn.

When it comes to compatibility, Waves plugins are king. I never once had an issue when running a Waves plugin in my DAW. They're cross platform compatible, so this plugin can be used on both Windows and OS X. They do have one issue, however; these plugins are 32 bit. Today's world is 64 bit, and the 32 bit plugins can be a bit annoying as a separate bridge program usually needs to be activated for them to work in a 64 bit environment. Aside from that, the plugin is awesome. The plugin doesn't take up too much RAM, and considering you might be using multiple instances of this plugin, that's a good thing. I've been using the Mercury bundle for probably half a year or so now, so I've had a fair bit of experience with these plugins.

The plugin itself is good, without a doubt. However, when I'm tracking bass for metal, I do things a bit differently. If it's just one bass track, I'll add some slight distortion, run a high pass and low pass filter, add some slight compression and be done with it. I generally don't need extreme EQs or tons of heavy compression to get it to stand out in the mix. In fact, the goal is to make it be in the mix but not dominate it, and I find myself over utilizing these sliders more than anything. This is more of an issue with the way I mix rather than the plugin itself, so I can't rate it down too much.
Did you find this review helpful?yesno
»

Waves Jack Joseph Puig Bass
4
The Waves Ltd. Jack Joseph Puig Bass plug-in is one of six found in the Jack Joseph Puig Signature series collection of plug-ins. I don't know exactly how these Signature Series bundles work in terms of the amount of input put in, but as far as I know JJP and Waves worked together in creating these plug-ins. You install the bundle at once, which should be a straight forward process considering nearly all DAWs will support them. As far as learning to use the plug-in is concerned, all of the plug-ins in this bundle share a similar interface style, so once you're familiar with one you should be able to navigate through them all. It's really a simple interface to begin with, with parameters in the form of knobs for sensitivity, compression, input level, and low and high EQ's. It then has sliders for main, edge, attack, sub, presence, length, and master, as well as three modes - DI, amp, or synth, the choose from. It's pretty easy to use, so I wouldn't think you'd need a manual.

I'm running the Waves Ltd. Jack Joseph Puig Bass plug-in and the full bundle on my system at home mostly, but have also used it at the professional studio where I work since I do a lot of interfacing between the two systems. My home studio consists of Pro Tools 9 and a Mac Book Pro computer that has a 2.2 Ghz Intel Core 2 Duo processor and 4 GB of RAM. I run Pro Tools with a Digi 002R audio interface and monitor with a set of Adam A7's. I've yet to have any issues at all running this plug-in...

The Waves Ltd. Jack Joseph Puig Bass is a great one stop shop for getting a great bass sound. In general I like to use individual processors when I'm doing serious mix downs, but for getting a quick and easy bass sound, this is a great plug-in to use. It's awesome because now that I've used the plug-in a bit I've been storing my settings and they work great as starting points for getting bass tones. It's pretty in depth considering the amount of different processors here, but you're still going to get more individual control if you use separate processors. All of the plug-ins in this bundle are like this, so it's cool to have one for each major mixing application. The Jack Joseph Puig bundle isn't my favorite of the Signature Series, but still absolutely worth checking out...
Did you find this review helpful?yesno
»

Special discounts at Waves this Saturday

Published on 02/12/16
Every weekend, Waves offer six 24-hour deals, with those for this Saturday concerning the Dorrough Meter Stereo, H-Delay Hybrid Delay and JJP Bass.