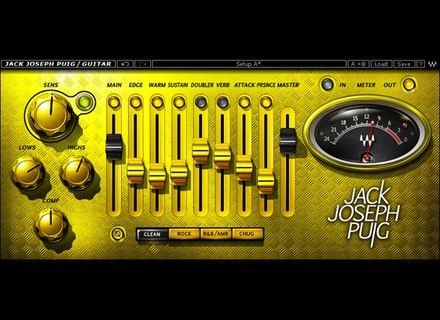 Waves Jack Joseph Puig Guitars
4
Probably one of the most famous engineers out there is Jack Joseph Puig. He's done everything from 311 to U2 and beyond. Considering his popularity, it was only natural that he would get some famous mixing/mastering plugins, and Waves stepped up to build and offer them to the public. This plugin features toggles to select between clean, rock, R&B/Amp and chub, a sentsitivity, lows, highs, comp, and master knob, a meter switch to select between output modes, mains control and faders that adjust edge, warm, sustain, doubler, verb, attack and presence.

This plugin is a plugin for those who are looking for an all-in-one solution to his or her guitar mixing. It has its own built-in EQ, compressor, reverb and more. I never experienced any compatibility issues with this plugin, so no problems there. I can't say anything regarding the manual as I never read it, but the plugin is fairly simple to use.

Waves is king when it comes to things like stability and performance. JJP Guitars is nice and solid, and I've yet to experienced a single crash when using it in my main DAW -- Logic Pro. The plugin itself is also cross platform compatible, so there shouldn't be any problems running this on both Windows and OS X. I do have a fairly minor issue, however. All of these plugins are 32 bit plugins, but my DAW is a 64 bit DAW. Because of that, there needs to be some sort of bridge program to utilize these. In an ideal world, these plugins would be 64 bit so I wouldn't have to run a separate application to use these. That said, the plugins don't take up much RAM, and that's a good thing as you'll probably have multiple instances of these things.

I don't really use this plugin that much. I like to do things differently when mixing guitars. The first thing I always do is add a high pass and low pass filter. That'll give the guitar some room in the mix to stand out and filter out the useless frequencies that may muddy up the mix. Next, I'll add a multiband compressor to help even out those boomy palm mutes. The final thing would be adding maybe a touch of compression or reverb, but it depends on the overall mix that I'm doing. In essence, I don't mess with the guitar tone that much. Because of that, i never found a ton of usage for this plugin, but it's not a terribly bad plugin.
Did you find this review helpful?yesno
»

Waves Jack Joseph Puig Guitars
4
The Waves Ltd. Jack Joseph Puig Guitars plug-in is one of six in JJP's signature series of plug-ins. Obviously, this one is specifically designed for guitars of all types. I installed the plug along with the rest of the full compliment of Waves plug-ins, and this is only available as part of a larger bundle. It's not too hard to get used to using this plug-in, as it shares virtually the same sort of make up as the others in the JJP bundle. Of course the parameters are different, which include modes for clean, rock, R&B, and chug, and sliders for main, edge, warm, sustain, doubler, verb, attack, presence, and master. It also has knobs for sensitivity of the effects, compression, and low and high EQ bands. It's more or less self explanatory, but it does take some use to get understand what each of the sliders will do for you as some of them aren't exactly specific. I'm not sure that the manual would help here, it's just about gaining some experience with it.

I've currently got the Waves Ltd. Jack Joseph Puig Guitars plug-in up and running on my system at home. I haven't used it elsewhere, although I do believe we have it on the systems at the studio where I work. I've only messed around with it to date in Pro Tools 9 which I run with a Digi 002R audio interface. My computer is a Mac Book Pro which consists of 4 GB of RAM and a 2.2 Ghz Intel Core 2 Duo processor. I've only had a need to run one instance of this plug-in at a time, which my system has been able to handle without a problem.

If you're aiming to get quick and easy guitar sounds with a versatile array of parameters and effects all in one place, the Waves Ltd. Jack Joseph Puig Guitars plug-in is going to do that for you. There are a few other plug-ins like this one for guitar that I have that are also Signature Series plug-ins. This is my favorite but it's still very good and can do a serious amount of work for you. It has sounds that are varied and all of a high quality, as you'll find with most Waves plug-ins. I don't know if I like JJP's bundle as much as I do the Kramer or CLA, but before buying any of them it's definitely worth trying all of them including JJP which is quite fine in it's own right.
Did you find this review helpful?yesno
»

Published on 03/05/16
Like every Saturday or so, Waves offers three special 24-hour deals, with three other to follow tomorrow.

This Sunday's special offers at Waves