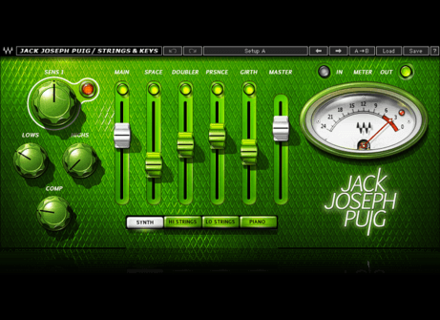 Waves JJP Strings & Keys
4
Jack Joseph Puig is one of the more famous music engineers/producers out there. Just like all his other plugins, this plugin is designed around how he mixes different instruments. JJP Keys and Strings takes a unique EQ/compression approach to mastering different parts. It's basically an all-in-one little utility to help make the parts stand out a bit more. The plugin features knobs for highs, lows, comp, and sensitivity, four different toggle buttons to select between synth, high strings, low strings and piano, sliders that adjust main, space, doubler, presence, girth and master.

The plugin itself is pretty different in that it combines these various little EQs and compressors into one plugin that you move independently depending on what you want increased or decreased. I never read the manual, so I can't comment on that aspect. However, the plugin is very simple to use, and I don't see anybody really needing one with something like this. Simply tweak the sliders until you get the sound you're looking for.

Waves is the master when it comes to things like compatibility and stability. First of all, this plugin is rock solid. I've never experienced any slow downs, crashes or instability when using this plugin inside of Logic Pro. It never takes up too much processing power, and that's a good thing considering that there could be multiple instances of this plugin being used on different busses. The one problem I do have, however, is that this plugin is a 32 bit plugin. While I understand it's a touch old, I'd like to see this rewritten in 64 bit. With 32 bit plugins, you usually have to run some sort of bridge/wrapper application to allow you to use them in a 64 bit environment. I find that it's a bit of a pain dealing with that, and I'm hoping they'll update it later on. I've been using the Mercury bundle for about half a year or so, and it's been awesome so far.

This plugin has helped me out a few times when I was mixing different string and orchestra parts inside a mix before. It's a fun plugin to use to get a good sound without much effort. That said, I sometimes question these plugins as they lack the versatility that a bunch of other plugins stacked on top of each other have. I like them for getting a good mix without a lot of work, but I always find that if I use a few plugins and take the time to adjust them properly, I can get a better mix. It all depends on how you want to approach it, I guess.
Did you find this review helpful?yesno
»

Waves JJP Strings & Keys
5
The Waves Ltd. Jack Joseph Puig Keys & Strings plug-in is one that's a part of the Jack Joseph Puig Signature Collection of plug-ins, having six in total. This is a unique plug-in as I don't believe any of the other Signature bundles have one that's devoted to Strings and/or Keys. I've got this plug-in at home, which I installed along with the rest of the bundle and full array of Waves plug-ins that I've got. I've also used it on the systems at the studio where I work. The interface of this plug-in is just like the rest of the plug-ins in the JJP bundle, so if you've used any of the others I think you'll be able to catch on pretty quickly with this one. It consists of a series of sliders for master level, girth, presence, doubler, space, and main. It also has knobs for sensitivity, lows, highs, and compression, as well as modes for synth, hi strings, lo strings, and piano. It can do a whole lot both in terms of signal processing for artificial strings and all sorts of keyboard sounds. I don't know how a manual for this plug-in is constructed and whether or not all of the plug-ins have one manual or not...

At home I've got the Waves Ltd. Jack Joseph Puig Keys & Strings plug-in running in Pro Tools 9. I've got it on a Mac Book Pro laptop which has 4 GB of RAM and a dual 2.2 Ghz Intel Core 2 Duo processor. I run Pro Tools 9 either stand alone or with a Digi 002R audio interface. I don't tend to use more than one instance of this plug-in at a time within a session, as it's not the type of plug-in that is going to be used on too many tracks at once, or at least I haven't had a need yet. Perhaps it has a lot to do with that, but I've yet to encounter any issues at all while running it.

The Waves Ltd. Jack Joseph Puig Keys & Strings plug-in is probably my favorite within in the JJP Signature bundle. I like it because it's unique and isn't something found in too many other places. At least in the other Signature bundles you'll get your basic instrument and vocal processors, but you won't find something like this in the other bundles. I love using this on keyboard based strings as well as piano and all types of keyboards, especially synths. It's a great plug-in for helping these types of sounds stand out a bit more in a mix. There's definitely a whole lot that can be done with it, a lot of which I'm still figuring out. The JJP Keys & Strings plug-in makes the whole bundle worth checking out, as the other plug-ins are quite worthwhile as well. While the JJP bundle isn't my favorite of the Signature Collections, this plug-in is awesome and definitely makes the bundle worth considering.
Did you find this review helpful?yesno
»

Published on 02/27/16
As usual, Waves offers three new 24-hour offers this Saturday, with three others to come tomorrow.

Waves weekend deals for this Saturday