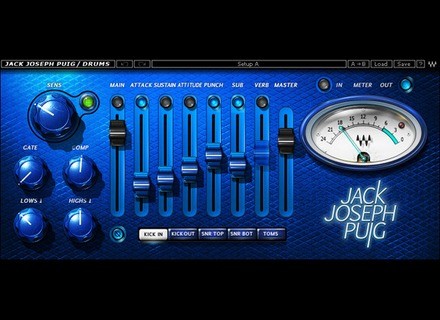 Waves Jack Joseph Puig Drums
4
Jack Joseph Puig is a one of the most famous, award-winning music engineer who's done everything from U2 to No Doubt. Considering his popularity, it was only natural that he would get some famous mixing/mastering plugins, and Waves stepped up to build and offer them to the public. The plugin features modes for kick in, kick out, snare top, snare bottom and toms, sensitivity, main, gate, comp, lows, master and high knobs, a meter switch to select between different views, a phase switch, and center fades that select between attack, size, attitude, punch, sub, length, sustain, tone, presence and verb.

The plugin itself is basically an all-in-one plugin to allow for "ease of use" and versatility without having to flood the screen with tons of different plugin. You can really do a ton of shaping with this plugin, and that's the biggest reason for using this plugin. I never read the manual, so I can't comment on that. However, everything is fairly easy and intuitive to use. I never experienced any compatibility issues with this, either.

Waves is one of the number one companies out there when it comes to things like stability and performance. JJP Drums is rock solid, and I've yet to experienced a single crash when using it in my favorite DAW -- Logic Pro. The plugin is also cross platform compatible, so there shouldn't be any issues running this on both Windows and OS X. I do have one minor issue, however. These plugins are 32 bit plugins for OS X, but my DAW is a 64 bit DAW. Because of that, my DAW has to run a special bridge program to fully utilize this. If possible, I'd much rather have to not use that if I don't have to, but it's a fairly minor complaint as they still work perfectly fine. The real cool thing about this plugin is that it doesn't take up too much memory, so you can use quite a few of these as necessary for your overall mix. I've been using the Mercury bundle for about half a year now, so I've had some decent experience with these plugins.

Drums are very hard to mix/master, and they take the longest time. You always have tons of different instances of triggers, having to move things closer to the grid without it sounding mechanical, parallel drum compression on the slower stuff and on and on. This plugin is cool for those who just want some simple all-in-one solution to help make their drums sound bigger without having to go through a ton of other plugins and work.

Waves Jack Joseph Puig Drums
4
The Waves Ltd. Jack Joseph Puig Drums is a plug-in that is part of the JJP bundle of plug-ins that are designed in tandem by the Jack Joseph Puig and Waves. It’s part of Waves’ signature line of plug-in bundles, with each of the plug-ins in the bundle being designed for a specific application. This one is of course designed for drums. The interface will provide users with a variety of parameters and controls for drums of all types. There are five buttons for different modes and applications – kick in, kick out, snare top, snare bottom, and toms. It then gives you sliders for attack, sustain, attitude, punch, sub, verb, main level, and master level. There are also knobs for sensitivity of the effect, gate, compression, lows, and highs. I found it easy enough to understand where a manual wasn’t necessary.

The system that I’m currently running the Waves Ltd. Jack Joseph Puig Drums on is my home studio. It consists of Pro Tools 9 and a Digi 002R audio interface, along with a Mac Book Pro computer that has 4 GB of RAM and a 2.2 Ghz Intel Core 2 Duo processor. This is more than enough juice to run this plug-in comfortably in my own experience, as I haven’t experienced any performance issues with it, although I’ve rarely had a need to run more than one or two instances at a time.

Like the other similar plug-ins in the signature series of plug-in bundles from Waves, the Waves Ltd. Jack Joseph Puig Drums is versatile and incredibly flexible, also much like the other plug-ins in the JJP collection of plug-ins. It doesn’t cost too much for the full bundle of JJP plug-ins, with the Drums plug-in in particular being great for all things drums as it’s flexible enough to adapt to all sorts of different situations. It’s got a very clean sound but isn’t as warm sounding as the Kramer Drums plug-in in my opinion. I wouldn’t prefer it over any of the other signature series Drums plug-ins, but it’s still great to have around as it’s got it’s own sound and is great in it’s own way…

Published on 02/21/16
Today only, Waves offer special prices on their Manny Marroquin Signature Series bundle as well as on the Q-Clone and JJP Drums plugins.