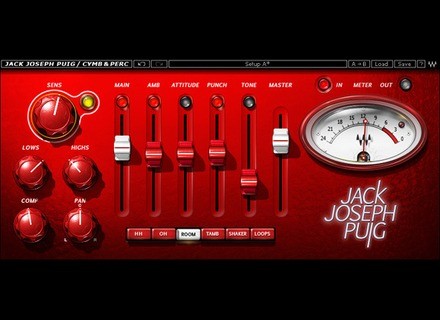 Waves Jack Joseph Puig Cymbals & Percussion
4
In the world of music engineering, Jack Joseph Puig is one of the greats. He's done everything from U2 to 311 to No Doubt and beyond. Considering his popularity, it was only natural that he would get some famous mixing/mastering plugins, and Waves stepped up to build and offer them to the public. The Waves JJP Cymbals and Percussion plugin is a plugin meant for those who are needing some all-in-one device to deal with cymbals in his or her mix. The plugin contains different modes for hi-hats, overheads, room, tambourines, shaker and claves, sensitivity, lows, highs, comp, pan, master and main knobs, a switch to select between different meter modes, and center faders for ambience, attitude, punch and tone.

As you can see, the plugin has all kinds of things going on with it. I never experienced any compatibility issues when using it, so no issues there. I can't comment on the manual portion as I never read it, but the plugin itself isn't too hard to use. The good news is that it's crazy easy to setup and run.

Waves is one of the best companies out there when it comes to things like overall stability and performance. The plugin is rock solid, and I've never experienced a single crash when using it in my DAW of choice (Logic Pro). The plugin is also cross platform compatible, so there won't be any issues running this on both OS X and Windows. I do have one issue, however. These plugins are 32 bit plugins, but my DAW is a 64 bit DAW. Because of that, my DAW has to run a special bridge plugin to fully utilize these. I'd much rather have to not use that bridge if I don't have to, but it's a fairly minor complaint as they still work fine. I've been using the Mercury bundle for about half a year now, so I've had some decent experience with these plugins.

Cymbals can be a real pain to get correct because they can sound super harsh if you're not careful. This plugin is a nice, all-in-one solution that can really help fix a lot of issues that might occur with cymbals. To be honest, I try to spend as little time on cymbals as possible and just utilize some slight EQ and/or compression. I focus more on the drums themselves than the cymbals when I mix.
Did you find this review helpful?yesno
»

Waves Jack Joseph Puig Cymbals & Percussion
5
The Waves Ltd. Jack Joseph Puig Cymbals & Percussion plug-in is one of six in JJP's Signature Series bundle of plugs. This is really the only plug-in of it's kind that I'm aware of, and is one that I find very useful for all sorts of applications. You'll install the plug-in along with the rest in the bundle which should be as easy as installing any sort of software. The interface of the plug-in is fairly simple to use and matches to same sort of look and make up as the other JJP plug-ins. As far as parameters are concerned, it's got sliders for main, ambiance, attitude, punch, tone, and master level. It's got a bunch of modes for hi hat, overheads, rooms, tambourine, shaker, and loops, as well as further parameters in the form of knobs for sensitivity of the effects, lows and highs, panning, and compression. As you can tell just from a look at the plug-in, it's flexible and there's a lot you can use it for in terms of different applications in the world of percussion and cymbals. It really goes beyond this as well when you use it for overhead and room mics as well. I don't have any idea how well the manual is put together...

I'm running the Waves Ltd. Jack Joseph Puig Cymbals & Percussion plug-in and the rest of the JJP Signature Series bundle on my system at home in Pro Tools 9. I do a lot of going back and forth between my home studio and the professional studio I work at, which also has this plug-in. Mostly I use it at home, which consists of a Mac Book Pro with 4 GB of RAM and a 2.2 Ghz Intel Core 2 Duo processor, as well as a Digi 002R audio interface to run Pro Tools. I've never had a need to run more than two instances of the plug-in at once, but for this purpose it has run just fine for me on both systems.

The Waves Ltd. Jack Joseph Puig Cymbals & Percussion plug-in is a great one to have around, as is the case with all of the JJP plug-ins. I like this one a lot because it's a unique take on processing for this application and works great as an all in one chain. I love using it on tambourine, shaker, and even on rooms and overheads for giving these sounds a little extra kick. You'll get all sorts of different sounds and colors with this in and easy to use interface, as is the case with all of the JJP plug-ins. This one is a huge plus as you don't get anything like this that I'm aware of in any of the Signature Series plug-in bundles. The Jack Joseph Puig bundle isn't my favorite of the few they have, but it's still great and this plug-in in particular is really useful to have.
Did you find this review helpful?yesno
»