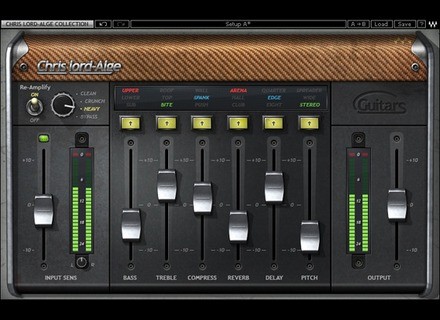 Waves CLA Guitars
4
The CLA Guitars plug-in is designed to process recorded guitar tracks inside a DAW. Waves installation is simple. Once you get the program up and running, it is simple to figure out the controls of the software.

The basic processing functions are all available with this plug-in (eq, compressor, reverb, delay, chorus). The dial that selects the 'drive' adds a predefined eq curve based on CLA's preference. 'Bypass' seems to have a flat eq curve. If you turn 'Re-amplify' to 'On', the plug-in adds amplifier simulation processing. When this is selected, the dial that selects the 'drive' changes between different amp sims that have different amounts of distortion.

Obviously the plug-in was intended to be used for guitar, although you could use the reverb or compressor for other instruments.

Compared to other amp simulator software (Guitar Rig 5, Amplitube, Pro Farm 2, Eleven, Waves GTR), the amp simulation in CLA Guitars sounds equally realistic. The disadvantage is this software is you can't control any settings of the amp sim like overdrive for each amp. You really just have a choice between low-, mid-, and high-gain. Where this software excels compared to the previously mentioned amp sim software is the post effects after the amp sim. In my opinion, the other software focus on the amp sim and the other effects are just an after-thought. The secret to a professional sounding guitar track is both a good amp sound, but also a lot of post-processing.

I would assume that the eq curves in CLA Guitars are specifically chosen with the corresponding amp sim. For this reason, I don't mind the fact that the plug-in doesn't give me the options to change a lot of detailed eq settings like frequency, bandwidth, etc. The compressors are not subtle and add a lot to the guitar sound.

I rarely use the reverb in any of the CLA Signature plug-ins. However, I still think they sound good. My preference is to have a reverb bus track that I send all the instruments to.

Some people won't like that there aren't more controls for tweaking. Honestly though, I have plenty of other plug-ins if I want to tweak. I don't really need another one to do the same thing. What I like about this plug-in is that I can throw it on a track and it makes things sound better.

Generally I will use other amp sims instead of the 're-amp' feature of this plug-in. I have a POD HD 500 for amp sims. But, I will always throw this plug-in for post processing. Compared to the other Signature Guitar plug-ins (Kramer, Maserati, JJP), this one is the most dramatic and the most rock 'n roll.

Waves CLA Guitars
4
CLA Guitars is part of the CLA bundle that Waves has to offer. These are plugins that were created by/for Chris Lord-Alge, the famous mixer who's done everything from Rocky IV to Slipknot. The Waves CLA Guitars plugin is basically an easy to use mastering utility for your guitars. It has sliders for adjusting bass, treble, pitch, reverb, delay, input, and output. There are also some small buttons up top to adjust different things, as well as a knob to adjust what kind of guitars you're mixing. To use this, you simply enable it on your guitar buss and start adjusting. I didn't experience any compatibility issues, so I can't comment on that. I never read the manual, but I don't think it's really necessary for these plugins. It's very easy and simple to use, so no issues there.

This is a pretty good solution for anybody wanting to master guitars in a small little plugin. For metal, I generally find myself using other devices out there. However, this seems to work nicely for everything from clean to hard rock. For metal, I generally try to leave them as uncompressed as possible since they're already super compressed from the amplifier. A simple high pass, low pass and multiband to keep the palm mutes from booming is generally all you need.

Waves CLA Guitars
4
The Waves Ltd. CLA Guitars plug-in is one that's part of the CLA Collection of plug-ins designed in tandem with famed engineer/mixer Chris Lord-Alge. It cannot be purchased outside of this bundle, unless you get a larger bundle of plug-ins like the Waves Complete bundle, which includes all of the plug-ins that Waves has to offer. Regardless of what bundle you get this plug-in in, you'll be installing it all at once, which should be a straight forward, step by step process. Using the plug-in is also quite straight forward, as it consists of a series of sliders for controlling the different parameters. These include bass and treble control, compression, reverb, delay, and pitch. It also has input and output leveling sliders. Each of the parameter sliders also have a few different modes from choosing different degrees and modes of the given effect. In addition it also has a re-amplify setting which is kind of an amp modeling effect, giving you three different modes to choose from to further enhance your sound. This is all pretty easy to use, so I don't believe that the assistance of the manual is necessary.

I'm running the Waves Ltd. CLA Guitars and the Waves Complete bundle on my home recording rig, which is Pro Tools LE based. I'm running everything on a Mac Book Pro that has a 2.2 Ghz Intel Core 2 Duo processor and 4 GB of RAM. Pro Tools LE is running with a Digi 002R audio interface and I'm running version number 8 of the software. This has been a very stable system for me over the last few years, and I can't say that I've had any issues running this plug-in here.

While I don't find myself using the Waves Ltd. CLA Guitars plug-in as much as I do some of the others in the Chris Lord-Alge (CLA) bundle, it's still a very useful plug-in for guitars. It's basically a one stop shop for in the box guitar processing, using high quality effects and overall sounds. All of the sounds on here are pretty realistic, but I'd say that I like using it best as an overall plug-in, not necessarily singling out any one effect here as I believe they work well in tandem rather than separately. If I'm doing a full on mix I'll use outboard gear when possible, but for getting some quick and easy guitar tones, the CLA Guitars plug-in has everything you need.
Did you find this review helpful?yesno
»

Published on 05/24/16
Today only, Waves offers a free GTR3 licence when you buy the CLA Guitars multi-effect processor plugin.