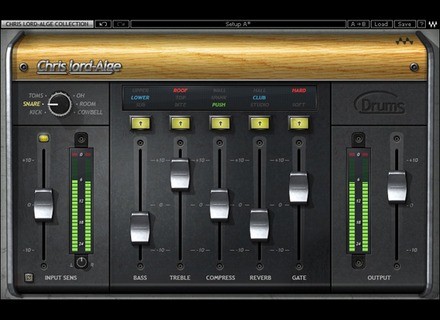 Waves CLA Drums
4
The CLA Drums plug-in is designed to process recorded individual drum tracks inside a DAW. Waves installation is pretty easy. Once you get the program up and running, there isn't much of a learning curve to get it working.

The basic processing functions are all available with this plug-in (eq, compressor, reverb, gate). The dial that selects 'drum' adds a predefined eq curve based on CLA's preference. Selecting different drums on the dial also changes how some of the other processing works behind the scenes. For instance, selecting 'cowbell' gives you access to a delay effect instead of a gate.

Obviously the plug-in was intended to be used for drums. That's not to say that you couldn't use the reverb or compressor for other instruments.

The processing in CLA Drums is not subtle. It immediately changes the sound of your drum tracks. I think some of the eq curves are pretty extreme (kick and snare). This kind of extreme processing will make your drums sound hyped up and closer to typical modern rock drums. This may or may not make your drums actually sound better. It is all a matter of preference.

If you prefer to add your own eq curve for the kick and snare, one option to consider is that the cowbell setting has a flat eq response, which makes the processing of the plug-in much less extreme.

The compressor options are the highlight of the plugin to me. I haven't really liked using the reverbs, and I don't use a drum gate in a lot of the music I make.

In general, I do like the convenience of pulling of a plug-in, clicking a few buttons, and have a decent sounding mix.

Some people won't like that all the functioning of the effects are happening behind the scenes (no control of attack, release, ratio, knee for the compressors for instance). I'm sure part of the idea for this plug-in was to make a product for the amateur and semi-pro musician who doesn't know much about mixing. If you don't know much about mixing drums, this plug-in is probably a good idea.

On the other hand, if you are an experienced mixing engineer and already have a bunch of effects with all the functions and knobs to tweak, do you really want another plug-in that does the same exact thing as all your other gear? This plug-in offers a nice change of pace with that respect.

In conclusion, this plug-in will make your drums sound rock and roll, no doubt about it. My main gripe with the product is that it only does over the top rock drums. When you need that, its great. When you don't, you would be better off picking up the JJP Signature Collection. His drum plug-in can do a lot more than just rock.

Waves CLA Drums
4
CLA Drums is part of the CLA bundle that Waves has to offer. These are plugins that were created by/for Chris Lord-Alge, the famous mixer who's done everything from Rocky IV to Slipknot. This plugin is meant for mastering drums, obviously. It's laid out very nicely in an easy to understand manner. You have slider for input, bass, treble, compress, reverb, gate and output. On top of those sliders, you also have specific buttons you can adjust for certain frequencies. Finally, you have a small knob to adjust depending on what type of drum you're mixing/mastering. To use this, you simply enable it on your drum busses and start adjusting. I didn't experience any compatibility issues, so I can't comment on that. I never read the manual, but I don't think it's really necessary for these plugins. It's very easy and simple to use, so no issues there.

Mastering drums is very hard. In fact, I find it to be one of the hardest parts of a mix to do simply because it spans so many frequencies, and there's so much going on in terms of overall dynamic range. This plugin definitely helps when you have to compress and adjust certain frequencies in a mix. I recommend trying it out if you get the chance.
Did you find this review helpful?yesno
»

Waves CLA Drums
5
The Waves Ltd. CLA (Chris Lord-Alge) Drums plug-in is one that is only found in the Chris Lord-Alge bundle of custom plug-ins. Waves has a few different engineer co-designed plug-in bundles with Lord-Alge's being one of the most popular. I installed this plug-in along with the full bundle of Waves plug-ins, so installing this wasn't any different than installing the rest of the Waves plug-ins out there. Once you've got past this process, it's on to learning how to use the plug-in, which I haven't found to be very difficult. The interface consists of a series of sliders for bass and treble, compression, reverb, a gate, and for both input and output levels. It also has a knob for controlling different presets for different individual sorts of drums. It's easy enough to use that I don't believe a manual is necessary.

The Waves Ltd. CLA Drums isn't the type of plug-in that's going to max our your processing space, but it really just depends on the type of system you're running it on. It should be safe to assume that if you've got this or you're looking into getting it that you've already got a pretty sturdy system. The one that I'm running it on is Pro Tools LE based and consists of a Mac Book Pro with 4 GB of RAM and a 2.2 Ghz Intel Core 2 Duo processor. I run Pro Tools LE with a Digi 002R audio interface and monitor with a set of Adam A7's. This has been more than adequate for me to run the native version of this plug-in, but it's definitely worth mentioning that I usually run it on an auxiliary channel for a drum bus.

The Waves Ltd. CLA Drums plug-in is the perfect place to start for getting a nice overall drum set sound using an auxiliary channel and busing your individual drum tracks to it. It's definitely also useful as an individual processor, but I've personally found it to be best suited for use on a full drum kit due to the nature of the parameters. Like all of the Chris Lord-Alge plug-in, it's got an incredibly crisp and smooth sound, with all of the processors in here being of a very high quality. In order to get the CLA Drums plug-in, you'll have to pick up the full CLA bundle, so if you're interested in this one I'd recommend checking out the rest of the plug-ins in the bundle as well.

And Wave's 24-hours sales for this Sunday are...