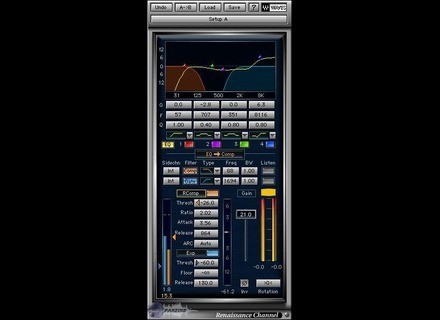 Waves Renaissance Channel
5
Channel strips have long been something that's been emulated in the digital world. However, a lot of them don't seem to capture that awesome sound that so many channel strips have (SSL for example). This plugin attempts to mimic some of those classic channel strip sounds with tons of plugins built into it. The plugin is pretty complex in that it has quite a few things going on. It combines EQ, compression, limiting and gating all in one single plugin. I'll list a few of the features here: It has a four band parametric EQ with an on/off per module, filter type, resonance low/high shelf, low/high pass, gain, frequency adjustable per band, Q control per band, routing switch, sidechaining for pre-EQ or external, on/off filter, filter high/band/low pass and reject, frequency control, BW, RVox or RComp, threshold, ratio, attack, release, ARC manual/auto, expander/gate option, and tons more...

I used to use this plugin all the time back when it first came out. I'd always put it on the master buss and start adjusting everything from there. It served me well throughout the years, and I highly recommend it to anybody out there. I've since moved onto another combination, but after typing up this review, I'm thinking of going back and utilizing it again.
Did you find this review helpful?yesno
»

Waves Renaissance Channel
5
The Waves Ltd. Renaissance Channel is an all in one sort of channel strip plug-in for your DAW. It’s part of the Renaissance Bundle of plug-ins and I got it along with all the other plug-ins in the Waves Complete bundle. The Renaissance Channel consists of a compressor/limiter, expander/gate, and equalizer. It’s not hard to use, but there is a lot going on in one place, so it definitely helps to break it down section by section. All of the signal processors in here have a very traditional configuration, so individually none of them should be too hard to use. The EQ is made up of four bands, and a helpful graph for plotting much like those you’ll find in most of the Waves EQ plug-ins. The plug-in also has side chaining options, phase inverse, and a variety of other features you’d expect with a channel strip. If you’re feeling lost just looking at the plug-in it’s probably a good idea to have the manual handy, but I don’t believe that most users will need it.

Right now I’m running the Waves Ltd. Renaissance Channel on my system at home. We’ve also got it on the systems at the studio where I work, but I’ve used primarily at home. My home system is Pro Tools LE 8 based, which I run on a Mac Book Pro consisting of 4 GB of RAM and a 2.2 Ghz Intel Core 2 Duo processor. I’m also running Pro Tools LE 8 with a Digi 002R audio interface or a Digidesign (now Avid) Micro Box if I’m not at home or a studio. I can’t say that I’ve tried maxing out the usage of this plug-in on this system, but will say that I’ve never had a problem running it for my needs.

The Waves Ltd. Renaissance Channel is a great overall plug-in, as it gives you most of what you need right in one place. It’s a Waves’ plug-in, so definitely don’t expect anything less than a super clean sound as far as plug-ins go. I’ll usually use the individual processors found here in other Waves or other plug-ins, but if I’m just looking to get a quick sound using both EQ and compression, this can be a great place to start. While I probably wouldn’t have bought it if it didn’t come in the full Waves Complete bundle, I’m definitely glad that I do have it…

Published on 04/20/16
Today only, Waves offers its Renaissance Channel plugin at $29 with the additional Renaissance Compressor for free.