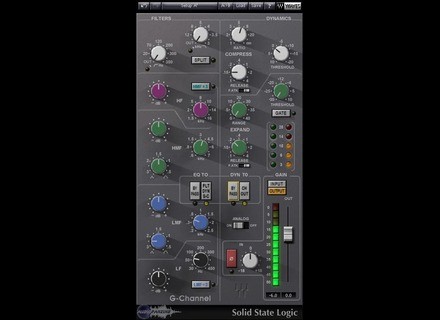 Waves G-Channel
5
Waves has already done the E-Channel, so what better one to do than add another one? This time, they're doing the SSL G-Channel. This is part of the extremely famous SSL 4000 collection that mimics the Solid State Logic SL 4000 console series all in plugin form. That means you don't need a huge room full of consoles. Instead, you can just load up one of these plugins and go for it. This has the EQ and dynamics/compressor control all in one convenient unit. The hardware allows for some real heavy manipulation of the overall frequency band, and that's one of the biggest selling points of the SSL series. On top of that, they're crazy musical. I find myself using this often.

Just like in my E-channel review, I use this and the E-channel a lot. Both of these have something unique to offer, and it's not uncommon to find me using both of these on a mixdown. It all depends on the overall tone you're going for, and sometimes I mix it up just for fun. I can never truly choose between the two, so I recommend you try both out. They're both wonderful plugins that sound very musical and are extremely versatile. Just be sure not to pirate these as Waves works hard for their money.

Waves G-Channel
5
The Waves Ltd. G-Channel is a channel strip plug-in that is available within the Waves SSL 4000 bundle. It's a new addition to the bundle, although I'm not sure if it can be purchased individually. I don't own the plug-in myself, as the studio that I work at has the whole bundle, so I can't say anything about the process of installing this plug-in. The interface of the plug-in definitely has a lot going on, but it's really just giving you options. There are two main sections for both dynamics and filter, with the EQ consisting of four bands in addition to a high and low pass filter. There is also a fader and some general parameters that you would expect to find within the confines of a channel strip plug-in. I haven't seen the manual for the Waves Ltd. G-Channel plug-in, so I can't speak to it's worth.

The studio has the Waves Ltd. G-Channel and the entire SSL 4000 series of plug-ins running on a Pro Tools HD system. We have a pretty powerful computer, although I can't remember the exact specs on it off the top of my head and in an HD system you're not using the computer's processing power anyway. I can't say how well this would run on an LE system or something comparable, but it is a bulky plug-in and I would imagine that it would take up a at least a decent amount of power...

The Waves Ltd. G-Channel is overall one of the best channel strip plug-ins that I've used. It sounds incredibly realistic and offers up a ton of control over your sound. I can't say how well it would match up to a real console since I haven't had a chance to shoot it out, it sounds like the real deal to me. I love how much control you have here, as it's got pretty much everything you'd need as far as equalization and dynamic processing goes. As I said earlier, I'm not sure on the availability of this plug-in outside of the bundle, but if you are looking for a bundle that will undoubtedly knock your socks off, definitely check out the 4000 series plugs, where the G-Channel is probably the best one.
Did you find this review helpful?yesno
»

Published on 07/16/08
Waves has announced the release of the SSL G-Channel, the latest addition to its SSL 4000 Collection. The power of the complete Solid State Logic SL 4000 console series is now at your fingertips in s…

Waves G-Channel manuals and other files