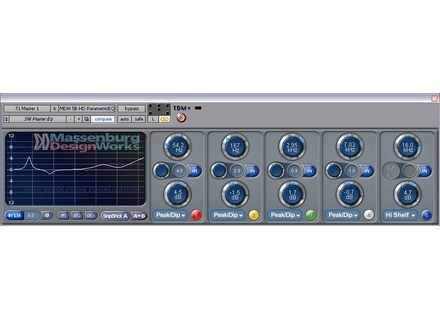 Digidesign MDW Hi-Res Parametric EQ 3.0
5
The GML MDW (Massenburg Design Works) Hi-Res Parametric EQ 3.0 has become my go to equalizer in the last six months ago, and I wish it didn't take me that long to get it! It's seriously one of, if not the best EQ plug-in that I've used. This plug-in basically emulates in digital form the ever popular GML 8200, which has become almost a standard for super specific equalization. The plug-in comes as both a three and five band EQ, which essentially come as a pack together. There is no difference between the two other than the number of bands. I didn't have any problems at all installing this plug-in as it wasn't a memorable process, which is always a good thing. Learning to use the plug-in also isn't too hard of a process, granted you know a bit about parametric equalization. Even if you're just learning, this is a great interface to start on. Each band, whether you're using the five or three band version, has parameters for frequency, Q (bandwidth), and gain (db). You can set the shape of the band to a variety of settings, including as a standard peak/dip band, hi or low pass, and hi or low shelf. However, the best feature of the MDW EQ is the ability to quickly sweep with each band. The button on the bottom right with the number on it on each band will instantly shoot up a bell isolating a small section of frequencies so you can hear what's within each part of the frequency band. This is extremely helpful for finding resonances and unwanted tones. I haven't ever seen the manual for this plug-in.

I'm currently running the GML MDW Hi-Res Parametric EQ 3.0 plug-in on my system at home, where I've got Pro Tools 9 running with a Digi 002R audio interface, modded by Black Lion Audio. My computer is a Mac Book Pro that has a 2.2 Ghz Intel Core 2 Duo processor and 4 GB of RAM. I've had no problems running this plug-in on the system at all, and let me say that I've been using it on nearly every channel for mixing...

The GML MDW Hi-Res Parametric EQ 3.0 plug-in is one that every DAW user should have. Trust me when I say that once you use it, you aren't going to want to use another EQ, as that's what has happened with it. It's simply so easy to use and it's super quick to pull unwanted frequencies. It has a super clean sound and won't color your tracks at all. The price is more than reasonable considering the quality here. Get this today and you'll never look at another EQ plug-in!
Did you find this review helpful?yesno
»

Digidesign MDW Hi-Res Parametric EQ 3.0
5
The Digidesign MDW (Massenburg Design Works) Hi-Res Parametric EQ 3.0 is a super precise equalizer plug-in for Pro Tools. The plug-in is designed to give users as much control over their sound as possible, and cites the GML (George Massenburg Labs) 8200 EQ as the inspiration. The plug-in can be used as either a three or five band EQ and has a crazy frequency range from 10 Hz to 41 kHz. Installing and getting the plug-in running should not be difficult, as it was just as easy as installing any plug-in for myself. The plug-in is only available for Pro Tools in either TDM (HD) or RTAS (LE) format. The interface is definitely user friendly, as each band has gain, frequency, and bandwidth type parameters to go along with the super helpful graph that will show you everything being done. A manual shouldn't be necessary unless you're unfamiliar with the make up of parametric EQ's, in which case you should probably do some external research outside of this particular plug-in.

I'm running the Digidesign MDW Hi-Res Parametric EQ 3.0 in Pro Tools LE 8 that I run with a Digi 002R audio interface. The computer that I'm running it all on is a Mac Book Pro consisting of a 2.2 Ghz Intel Core 2 Duo processor and 4 GB of RAM. The MDW EQ 3.0 isn't the type of plug-in that I will use on every channel, as it's highly specific and I tend to only use it when I'm looking to get real precise. Don't get me wrong, it's certainly useful across the board, but in terms of performance I haven't yet had a need to try to max it out on my home system.

If you could only have one parametric equalizer plug-in in your Pro Tools rig, I would think you'd have to seriously consider the Digidesign MDW Hi-Res Parametric EQ 3.0. It's more versatile and has a wider range of any EQ out there while still being really easy to use. It has a very clean sound, but won't live up to the GML 8200 that this was modeled after. However, as far as software EQ's go, this is one of the best that I've used. Highly, highly recommended for anyone interested in a very clean and precise parametric EQ.
Did you find this review helpful?yesno
»