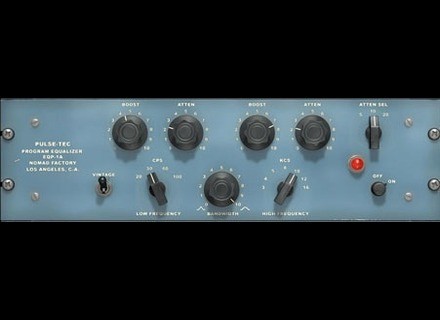 Nomad Factory Pulse-Tec EQP-1A
4
The Nomad Factory Pulse-Tec EQP-1A is a program equalizer plug-in that is a part of Nomad's Pulse-Tec bundle. The bundle consists of three different EQ plug-ins, all designed after, you guessed it, Pultec EQ's. The EQP-1A is the main plug-in the bundle in my opinion, since the original Pultec EQP-1A is the most well known Pultec EQ and the most copied. There are a number of different plug-ins out there that model itself after the EQP-1A, including those made by IK Multimedia and Bomb Factory. I don't own this bundle myself, but have used it a number of times at the studio where I work, mostly just to mess around with it and get a feel of all the different plug-ins that we have. Even if you haven't used an original Pultec EQP-1A or any of it's copies, it's still a super easy EQ to use. It's got two bands essentially, each with their own parameters for frequency, boost, and attenuation. The low frequency band has four different frequencies to choose from, ranging from 20 to 100 Hz, while the high frequency band has six in total. There's also a band width parameter and a 'vintage' switch which is supposed to add a little more of the original feel of the Pultec to it, although I'm not convinced it does. I haven't had a need to look at the manual for this plug-in...

The studio that I work at has the Nomad Factory Pulse-Tec EQP-1A and the full Pulse-Tec bundle running on a few different systems. I've used it on two of the systems, both of which are Pro Tools HD systems. The main room has a Mac Pro computer with dual 2.66 Ghz Intel Xeon processors and 10 GB of RAM, the other room has a lesser equipped Mac Pro computer, but more than adequate nonetheless. I've never had anything close to a lag on these systems at all, including while using this plug-in of course.

While not my favorite Pultech EQP-1A plug-in emulation, the Nomad Factory Pulse-Tec EQP-1A is still quite solid and is more than useful for mixing purposes. You gotta love the Pultec EQ configuration, which is just so easy to use that it makes it a real simple job to cut or boost at any of the given frequencies. While perhaps not as versatile as a fully parametric EQ, the idea is of course to model this directly after a EQP-1A. The tone of the plug-in isn't going to give you an instant Pultec sound or anything like that, but it's certainly clean sounding and solid overall. The other plug-ins in the bundle round it out to make it a worthwhile group of plug-ins at an incredibly reasonable price. At this price it's a great buy for the home studio owner looking to get some new quality plug-ins on the cheap. Not sure they would be my first buy for an EQ plug-in bundle, but for the price you really can't go wrong...
Did you find this review helpful?yesno
»