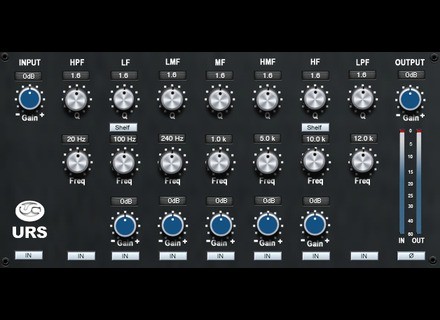 All user reviews for the URS A Series Mix EQ

Average Score:5.0(5/5 based on 1 review)
Not satisfied with those reviews?
Our members also liked:
View price information

URS A Series Mix EQ
5
The URS A Series Mix EQ is an equalizer plug-in that comes as part of the URS A Series EQ plug-ins. It's a more in depth version of the A Series EQ, offering more bands and therefore more control. Installing the A Series EQ plug-ins is a quick and easy process as you just follow the simple step by step instructions that your installation wizard will make you go through for installing any software. Learning the interface of the plug-in is quite easy as well if you understand how to use parametric EQ's in the first place. There are 7 bands in total, with the middle 5 giving you control over gain, frequency, and Q, while the two on the outside serve as high and low pass filters, giving you just control over frequency and band width (Q). The plug-in gives you the ability to pick and choose which bands you'd like to engage, as well as overall input and output gain knobs. It's an easy plug-in to use, so I don't think you'll need a manual. I'd recommend doing some research on equalization in general if you feel lost with this one...

I've got the URS A Series Mix EQ plug-in currently running on my system at home. This rig consists of Pro Tools 9 and a Mac Book Pro lap top. The computer has 4 GB of RAM and a 2.2 Ghz Intel Core 2 Duo processor, which has definitely be powerful enough for me to run this plug-in comfortably. Generally, I'll run the regular A Series EQ plug-in if I'm just using one or two bands, but if I'm looking to get more in depth I'll pull this one up. Everyone who has the A Series Mix plug-in will have the simpler one as well, so no matter what system you're running it on it's a good idea to be mindful of this.

The URS A Series Mix EQ is overall, a great EQ plug-in to have around in my opinion. I use it pretty often when I'm looking to get some in depth equalization done for mixing if I'm working in the box. The EQ has a really clean and realistic sound, although of course as always it's what you do with it. However, you really couldn't ask for more control with the A Series MIX EQ, as it definitely covers the full spectrum of frequencies and has enough control where this can be useful for any application. URS has a nice array of different EQ plug-ins that are modeled after different consoles, so I'd encourage you to check them all out before settling on the A Series EQs, which certainly isn't a bad way to go at all. This series of plugs is cheap enough where it's attainable for almost any DAW owner, so definitely do yourself a favor and at least try out the demo!
View price information
Did you find this review helpful?yesno
Cookies help us improve performance, enhance user experience and deliver our services. By using our services, you agree to our use of cookies. Find out more.