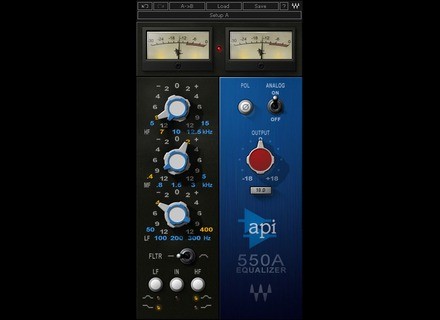 API 550A, Software parametric EQ from Waves in the API series.

Waves API 550A
4
This is a pretty versatile EQ that Waves offers. It's a three band EQ modeled after the API 550A. There are 15 points of boost that are divided into three different ranges, and they are selectable in five different steps. The high and low frequencies can be selected individually, and you can choose between either peaking or shelving, depending on what you're looking for. You can also have a band-pass filter that can be inserted independently from all the other settings in there.

This EQ is pretty nice compared to the other vintage EQs because it's very versatile. Because of that, I found more usages with this plugin than I have with their other vintage EQ plugins. You can choose a wide variety of sounds thanks to its versatility, and despite it being a three band EQ that is limited to notched frequencies, it can work nicely on vocals, guitar, bass and even drums.

This is one of the more useful EQs that Waves has created, in terms of vintage EQs, at least. I found quite a few usages for this, where as some of the other ones were a bit geared more towards classic rock. Applying these to some slightly overdriven guitars give it a real vintage-esque EQ sound that can make the mix really pop out. Using it on vocals can give it all kinds of neat effects, too. Try it out.
Did you find this review helpful?yesno
»

Waves API 550A
4
The Waves Ltd. API 550A is a parametric equalizer plug-in that is available within the Waves API Collection of plug-in. I'm not sure if it's available outside of this bundle, but I don't think it is. This is basically a software version of the API 550A, which for those of you who don't know is a popular Lunchbox series EQ module. Installing this plug-in and the full Waves API Collection bundle is really simple as you just follow the step by step instructions as you would for any other plug-ins. Learning how to use this plug-in should also not be difficult, even if you aren't familiar with the hardware 550A. The EQ is a made up of three bands in addition to a high and low pass filter. It also includes an output leveler knob. I haven't seen a manual for this plug-in, so I can't say if it would be helpful or not.

I'm currently running the Waves Ltd. API 550A on my home system which consists of a Mac Book Pro and Pro Tools LE 8. The computer is a lap top and has a 2.2 Ghz Intel Core 2 Duo processor and 4 GB of RAM. I've been running Pro Tools LE 8 with a Digi 002R audio interface or a Digidesign Micro Box if I'm on the go. This isn't the type of plug-in that's going to kill your processing power by any means, but it will of course take up a small amount and more with each instance. It's hard to say how well it would run on any given system, but on mine I haven't had any troubles with it.

The Waves Ltd. API 550A is a nice little plug-in, as it sounds clean and is very easy to use. It wouldn't be the first plug-in that I'd go to for equalization, but it still sounds very good and can be very useful. I've used a real 550A many times before and can't really say that this has the same sound. Even so, it's good enough to use and it's definitely nice to have it around. The Waves API Collection in general is a very nice bundle of plug-ins and I'd definitely recommend scoping it out if you're looking to add some high quality plug-ins to your DAW.
Did you find this review helpful?yesno
»

Anonymous 's review (This content has been automatically translated from French)" Finally, a colorful and musical EQ"

Waves API 550A
5
nothing more simple, the ilok being the most difficult but also very simple

J have not yet had the opportunity to change the PC, so centrino 2Ghz core duo, vista and 3 g mo
works really well even with plusiurs forums.

1 month that I used
then it is really an eq in musical direction or push the bass, medium or sharp colors the sound but a pleasant way, it brings something really, .. I've had the thunderbolt in qq minutes ..
ideal for electric guitar, bass ..

Published on 05/29/16
Waves has introduced three new 24-hour offers with reduced prices on their eMo D5 Dynamics, The King's Microphones and API 550 plugins.