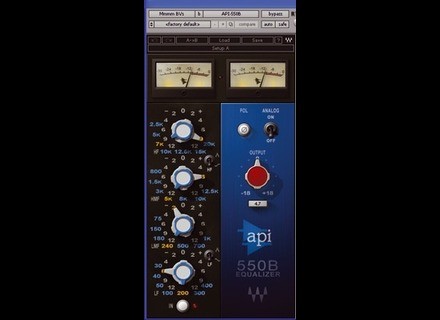 API 550B, Software parametric EQ from Waves in the API series.

Waves API 550B
4
This is the next EQ that Waves offers in conjunction with their other vintage EQs of this APi series. The Waves API 550B is more versatile than the A, and it has even more usages. There are four overlapping equalizer bands with seven switchable filter frequencies, five octaves per band, a special Q control that widens or narrows the overall mix and has a few other special tricks in there.

I find that more people will be using this instead of the API 550A. For one, this is a much more versatile EQ. Because of that, you can fine tune the EQ a bit. However, both have their own unique flavors, and it depends on what you're going for. If you only need three bands, the API 550A might be just what you're looking for.

I tend to go back and forth between this and the API 550A. For one, this is a bit more versatile as it has more bands to adjust. On the other hand, I sometimes find myself thinking that the API 550A is a bit more musical. I'm not sure if that's purely a psychological thing or what, but in the end, they're both killer EQs that can be applied to nearly everything, although I find they're not quite as useful on drums as they are other things. Check it out!

Waves API 550B
5
The Waves Ltd. API 550B is a software equalizer that is part of the Waves API Collection of plug-ins. It can't be purchased individually as far as I know, so check out the full bundle if you're interested in this one. I recently got the full bundle of Waves plug-ins, so I installed this one along with the API Collection at once. The process should be quick and easy as long as you've got proper compatibility happening. The interface is quite easy to figure out as well as it's a four band semi-parametric EQ. If you're familiar with the general make up of equalizers, you'll definitely feel comfortable using this one. Each of the four bands has parameters for gain and frequency and there are switches for setting the bandwidth on the high and low bands to either a shelf or standard. The plug-in also has an 'analog' switch and an overall output parameter. I've never seen the manual for this plug-in and don't plan on ever needing too since it's pretty simple.

The system that I'm running the Waves Ltd. API 550B consists of a Mac Book Pro and Pro Tools LE 8. The lap top has 4 GB of RAM and a 2.2 Ghz Intel Core 2 Duo processor, while I'm running Pro Tools LE with a Digi 002R and I'm listening with a set of Adam A7 monitors. This system has been more than adequate for running this plug-in, as I've never had any performance issues whatsoever. I don't tend to put it up on every track, but I've used enough instances of it at once that I wouldn't be concerned with doing so if needed.

The Waves Ltd. API 550B is probably the most useful equalizer of the EQ plug-ins in the Waves API Collection, as it's certainly the most flexible and shares the same pristine sound quality that the other Waves API EQs do. It's a really great sounding EQ in general and I'm a big fan of the make up of this as it reminds me of a console's EQ which feels most comfortable to me. I'll always try to use hardware equalizers when possible as to me there is nothing that can match running a sound through actually circuitry, but this is really as close as you can get inside the box. At home I don't have much outboard gear so I do rely a good bit on plug-ins. I'd definitely recommend the Waves API 550B as a fabulous software EQ!

Published on 05/29/16
Waves has introduced three new 24-hour offers with reduced prices on their eMo D5 Dynamics, The King's Microphones and API 550 plugins.