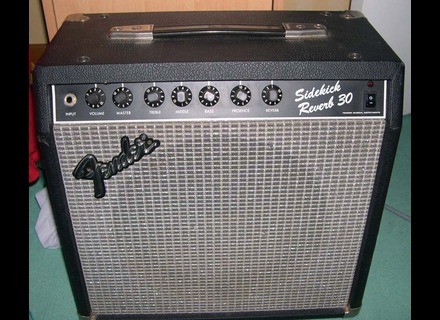 wizion's review (This content has been automatically translated from French)

Fender Sidekick Reverb 30
5
30W transistor amp
distortion, reverb
Line Out
(Sound a little NIN output line!)
open at the back, you see the HP and reverb

I use a gibson nighthawk
its clear, it sounds great (for 30w)
has saturated its going well for the rock / blues with the gain a background, it is aggressive even qd
in volume, we feel the 30W RMS, in fact the HP is quite baleize
you can get distortion trash / metal

recess is not the kind of sound, like a pod or you think a sound and you reproduced,
rather it is to get yourself tonn lifelike sound, and you rgale a play with!

I use it for 7 years,
and he never gave the beast super strong!
what I like most about this amp is the authentic sound

I have another Marshall amp vs100R
well on the marshall sounds better to the metal, and a 100w gives more volume, low ...
but I never heard 30w amp that sounds better, with as much personnalitbr />
the fender amp, it's the ball!

C4n4rd's review (This content has been automatically translated from French)

Fender Sidekick Reverb 30
4
Transistor amplifier, do not RVer, there is only one exit.
Power level is a 30watt, but it grows well, with the master background we get a volume having a perfect genre for rpeter!

Level because it has not, leave a trs ffective reverb, the amp has only the basic settings.
The sound remains clean, which is an advantage and inconvnient! Do not expect to have a metal sound / light or hard / dirty such as with the effect GAIN.

Reggea style is not bad, or blues, or variety: p. Count or not jou hard metal, the sound does not saturate.

I have not much jou above, I can be modified over time I think I have a acquri 120 euros which is a trs good price, for me it is a powerful amp or I do not look jou in fact, buy as much good pedal!

I sold it was my second amp for a Marshall 100 w lamps at home ...
It is powerful enough for rehearsals and concerts in a club.