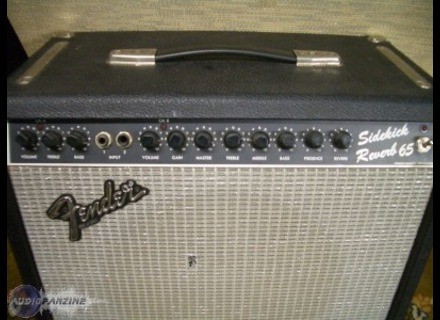 Fender Sidekick Reverb 65
3
I got this amp off ebay for about $130 used. I needed an amp for small gigs, and I thought this would fit the bill.

I like the fact that this amp has an FX loop, a 2nd channel that mixes the 2 channels it has, and that it has some very nice reverb. 65 watts is what I was looking for and this has it. It has been loud enough for my gigs I've been doing (mostly playin in a big church). Can't say to much here...

The sound!! I don't like the sound! Pro: VERY clear Con: VERY trebly!! Nothing you can do can take away the amount of treble this has. I tried forever to get this to sound good, and it took a long time to get some decent sounds. Only a 2 band EQ on the clean channel, and it has no gain whatsoever...I'm dead serious. You can hardly tell the difference between the clean and "overdrive" channels. I put my metal zone pedal in front of the amp, and it sounded terrible. Through the FX loop it still sounded bad, but better (gotta have the reverb off or it will go on forever...). With my metal zone on, in the many combinations I tried it, it still lacks deffinition.

It was made by Fender, bt doesn't look like it can handle how I (and anyone else) carries it around. All I can say is it BETTER hold up for at least a year or I'm gonna be pretty upset, and by looking at it, it makes me worry.

I don't like this amp, at least for what I wanted to use it for. If you like a lot of clearity and treble, this might be your cup of tea. It does however have enough volume for smallish gigs and can handle a drummer. It's an old amp, so good luck finding it new, but if you find it cheap and used, it's not really a waste of money. But if you are getting one... good luck... you'll need it...

po : go's review (This content has been automatically translated from French)"The transistor amps sounds not: laughing!"

Fender Sidekick Reverb 65
5
It is a pure amp transistors, 65 Watt, but new exiting really, really hard! two independent channels (clean and crunch) an effects loop, reverb. Classic what ... I just regret the absence of a tremolo and it would be perfect. Two inter-integrated footswitch (but with a cable length very comfortable, as the power supply cable) which switches clean - crunch and controlling the on / off the reverb. For both inputs, it is very simple: guitar plugged into input 1, the channel changes on the foot control with the footswitch, two guitars plugged into each input, there are two independent channels (1 clean for one, the other distortion) when you plug one guitar on input 2, it was the clean and distortion at the same time! that&#39;s a plus that allows a fine adjustment of interest and get a very personal and unusual sound, mixing of light and crunch each with independent volume control. However, as often with Fender, the volume of the clean channel starts on the hubcaps. Needless to say that you play in a flat clear will be tricky ... even 1!
For settings, again the classic Fender:
- Channel 1: volume, treble, bass,
- Channel 2: volume, gain, master, treble, middle, bass
- Presence and reverb common to both channels.
This amp, Rivera period post comes from the land of the rising sun, at a time when Fender was in the trough of the wave. Very good design and electronics manufacturing Japanese firm and the HP 12 &#39;from the USA, which gives him a good mouth American Fender, friendly and of good quality.

For those who know Fender, no surprise on the config. No need to book, just the ear and curiosity. Meanwhile, it&#39;s steep fall! fucking potato so clear that crunch. Transistor this class, I want every day! a success. A good range of sounds in perspective for those who want to take the trouble, ie turn the knobs! For my part, I add one (most excellent French pedal) Electro Wave Benrod box in effects loop, because I&#39;m a fan of tremolo.
The clean channel is great, no surprise but very good. The channel distortion can be controlled rather him by the position of the knob medium to obtain a more natural sound as found on any lamp, but if you want something less defined, more compressed and fuzzy, noisier, you can try to add gain ... mixing the two input channels both still possible to vary the pleasures cool.
The reverb is itself very old school, because spring and a box (too) small. I would have loved fuller, but it does the job, but not the strong point of this amp must be sincere. I still appreciate its dark side, and resolutely rock&#39;n&#39;roll far, I do not like the breath she gives!

It is well suited to rock to blues. For the metal, I would so some reservations, but not paying in this genre, I will remain neutral.
The good old clean sound R&#39;n&#39;R fuzz sound to death (with a DM4 for now, until we have the necessary "French" Kraken Fuzz overdrive!) It allows an officer - in style - in the sixties genres, blues, garage, punk or "classic" rock. A real incisive presence in the mix, that&#39;s good. With a venerable Cruccianeli ES335 type or strat, I have good results. I love its richness and typical Fender sound transports me, frankly, I am amazed by the quality of organic sounds that I leave.
But the novice guitarist will pay attention to the case of random possessions by the devil volume: my drummer is not a slacker, yours will be a relentless warrior, working in the fury and swirl the sound barrier! Indeed, the acoustic pressure exerted by this brave Fender may surprise you, and all unconscious placing within 150 meters of your amp when the gods of rock&#39;n&#39;roll seize you! (Well, the mystical sequence is set).

I recently but I expected to repeat at high levels before writing this review. Verdict? it&#39;s a killer, man. With or without pedal connected over his sound character can only fill you up. Unfortunately rare in our region, it has a great value for money (bought 80 euros). This is an amp for 80 years, longer manufactured. But do not despair: Fender in his meekness, has put together a few surprises in his years transistors, the Sidekick Reverb 65 is not a unique case, then really looking at the reviews Audiofanzine and in the classifieds, ignored treasures await you fail.
Feel free to add the talents of one or more pedals, French if possible (Benrod, Kraken, and many others) because really great in the hexagon and no more expensive stuff is produced that made the crappy plastic in "I do not know where." And beware: a sound that is personal, the road is fraught with pitfalls, but before giving the commercial lure of the new tube amp that costs an arm, sympathetic look from junk, you might be surprised . Recycle, after all, is not that consume cheesiest again and again, right?
To conclude, I would say that the Sidekick 65 Reverb amp is solid, reliable, versatile, with a level of killing. While desire? an all-tube amp? frankly, even injuring some: even!