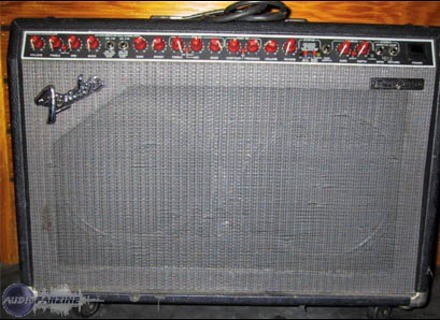 Fender Power Chorus 2x12 Stereo
3
bough it second hand,private sale for 850 australian $. i needed an amp that can move some air so we could free some channels on the mixer and at the same time so the drummer could hear me over his own bangin' (and so i wouldn't have to listen to him that much).been playing for 20 years(all sorts of stuff but ZZTop still gets me fat)

the amp has a brilliant clean sound. it is solid state but after a/b recording of couple of tube (63')fenders and power chorus it turned out that difference was so minimal nobody could state with certainty which was which(unless of course i deliberatly set the sounds to be miles apart).we are talking about the clean channel here,of course,which is the usefull channel...dirty channel is a totaly different story(read :suction of apocalyptic proportions) and knowing solid state woes as far as distortion goes there is not much to say.fuzz and fluff...that's all that there is except on minimum gain settings where you can fake some rhytm sounds but...pretty lame, however if your goal is to have a great clean amp that can be a powerhouse for your effects(racks or floor) this is it. it's a 2 x 65 W(totaly separate amps ie true stereo) monster that breaks up only when you are pushing it at 9 and by that time your ears will be bleeding and your drummer will be running of the stage,holding his ears screaming "mommie,mommie !!!" while the singer will have a perfect excuse for singing out of key. it is so loud that some less experienced reviewers(on other sites) are stating that it gets 400 Watts(don't ask what they are talking about but also don't laugh at them to hard 'cose this thing really is loud.mind you it's not a PA, as they are stating,but that's youth for ya). in the fashion of late eigties era it has all the pre amp out's and power amp in's, adjustable sends and returns and all that jazz that some peple can't live without and some don't even now what it is for but it's good to know that it's there when you want to change bands and venues and setings of the whole rig(go direct into a PA or so...).did i happen to mention that it's half the weight of a twin? not to mention that it less than half of the price also...
we played all sorts of gigs(big and small,indoor and outdoor,hot and steamy and freezing cold) and it really was a trooper.didn't even cough. it just played and played and played.even after it was 12 straigh hours switched on and 12 years old it just pumped whatever crap i was feeding it from the LP,BC mocking or ASAT or a strat that i used to play at respective times. it also has 'built in' a thickest chorus effect in the industry(seriously...i'm still looking to hear such a lush chorus through any effect pedal or board or...roland jazz blows in comparison)

as i stated earlier...dirty channel is(to put it politely) not very unlike fiecies. also the knobs on the control panel can get easily damaged in "careless turning of the corner" accidents which can prove to be expensive to repair only because there is trillion of screws to be removed to get to the guts of the amp and if you are paying per hour...you figure...

it's a perfect road warrior for all of you road warriors without roadies.it will last you a decade of obuse easy(after all it is just a wooden box with some stuff inside so if you drop it from a first floor it's bound to explode into pieces but if you don't do that sort of stuff it will loyally "push from behind" 'till techno is out of fashion after it comes back as a retro)

this amp makes sense ! and it makes sense to own it if you have an application for it. you don't need it for room practice or band rehearsals but if you're going out and about,you need something good enough to play at top level and not good enough for people to steal as soon as you get off and go for a leak. so there!!! points off for half the amp that sucks sand.

Soulbilly's review (This content has been automatically translated from French)

Very easy to use EQ 2:
1 eq for clear sound
1 eq for the distortion
+ 1 additional distortion (boost)

The chorus is .. deadly!
good reverb, gain is good, can be drawn from this beast sounds amazing.
I use it with a Start ... and we can say that it does .. (Soul funk blues ..)

Fender for the warm bluesy sound, but the boost of the distortion can be a very aggressive if their desired ..

I ream 3 years in many rads ... no problem for a battery cover (I never pushed the beast back, even during the repeat-horse sound of hell!)

I love its power, its hot, and the report quality price madness ...

I would not have been better at this price ..
there is less .. c but more expensive!