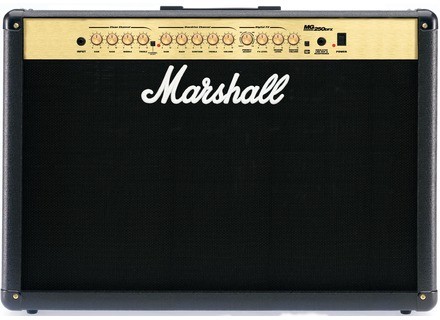 Marshall MG250DFX
4
I've been playing guitar for roughly 10 years, in and out of various bands. we mostly play metal, nothing really heavy but not light either.

I purchased it at a local music store in town for $750 Canadian a couple years back.

Its nice because its a medium size amp but has all kinds of power. I found the effects to be quite nice especially the delay, its very clean, and of course it has the good old marshall distortion when you want it. I've braught it to many jam sessions and it keeps up with ease and is very durable. My fan occasionaly makes a bit of noise but once its warmed up it quiets right down and its done this for about a year and a half. the bearings are fine. Overall I love this amp and would buy another one in a heartbeat if something happened to it.

very durable, built as good as any other Marshall product

Great price, lots of power, nice Marshall sound even though its solidstate, effects are great. Other then a noisy fan its a great amp for someone who just wants to jam with some friends or to do shows with.

Marshall MG250DFX
1
I've been playing in bands for the past ten years and have owned many different amps. I bought the marshall because I did like the sound in the store and trusted the name if something would go wrong.

The clean tone was ok and the distortion was adequate.

In all Marshall MG series amps they are cooled internally by a very cheap little plastic fan. This amp made a strange grinding noise after 6 months of use. This was the fan motor dying. After a year the fan stopped working and the amp would overheat (one of these times was at a show). When this happens the amp shuts down and if you don't have a backup your screwed!! Marshall's warranty is over rated cause they don't pay for shipping. Just because it says marshall doesn't mean its good.

The construction quality is irreleavant because the whole amp depends on a 3 dollar plasctic fan.

Marshall MG250DFX
5
To me, for a guitarist, especially for rock, Marshall is the ultimate amp. All these new amps (Line 6, etc) are great too, but they're just trailing behind in Marshall's tracks. It's funny how people will buy one of these other amps and say "I can almost get a Marshall sound out of it." Just buy a Marshall!!! This amp retails for $700.00, but you can usually get one for about $500.00. You won't believe this, but I got this amp from Guitar Center for $349.00 plus tax! I had bought the MG100 HDFX head and had problems with the fan, (like many others)so I took it back and they swapped me even. Now that's great customer service!!!! That's my store from now on. As one other reviewer stated, be ready to haggle. There is so much competition between Guitar Center, Sam Ash, Musician's friend, AMS, etc, now I will never pay asking price. Do like I did. Find the lowest price on the internet, print it, and walk into the store. Most of them will meet or beat it. I wanted a combo that had the Marshall sound and would really rock on its own without having to take my 4 X 12 cab everywhere. This unit is perfect for that.

As I said I wanted to be able to travel light and still crank. This amp more than does the job. I used to have an original JCM 800 with 1960 cab back in the day. This amp actually sounds better. Sorry to all you tube freaks. I read all this griping about tube vs solid state. Most people just don't take the time to tweak the knobs! I love the delay/chorus effect. I can play at low volume and sound like I'm in an arena! There is amazing versatility of soung with the gain knob between 1 and 10. When I want to really hear the guitar's tone I put the gain on 1 or 1 and 1/2, and I get get a great slightly distorted edge with great sustain. But if I'm feelin' the need to let her scream, I can go to 10 and Nuge out! But it definitely sounds better with the master volume jacked up!!!! And I don't have to worry about tubes blowing. I can get any sound I want from this amp. I can do Van Halen without any external pedals and flip the supplied footswitch and go to a beautiful clean sound. I can make my Strat sound like Stevie Ray and my Washburn hollowbody sound like BB King or Alvin Lee (ouch, I just showed my age). I can get just a little bluesy edge or melt your brain distortion. The reverb is great, just experiment with it. Setting it on 4 or 5 works for most things. The scoop feature is very useful and dramatically changes the sound so turn it slowly to hear the different nuances of tonal variey. I put the master volume on 5 and made the mistake of standing directly in front of it and my ears hurt! But when I really want to rock I have a Marshall 4X12 cab I hook up to it. There are two outputs in a stereo configuration and it works great! (Wow, now I need that second cab to go with it.) I use the emulated line out on stage straight to the board and it really sounds good, and the same jack doubles as a headphone jack. It's got the effects send and return which I use with my RP100 processer but I like the sound I get from the amp better. It's more natural.

The only problem I had was with the fan. It sounded a little funny. Anyway, I didn't take this one back. I just keep playing it as much as possible and have hade no more problems. The rep said as you use it more it loosens up and gets better. That seems to be the case. I don't hear any noise anymore. Any way when you're CRANKING a Marshall, who's worried about a little fan noise you can't hear? Oh, it's a little heavy to carry for a practice amp. But the sound is worth the weight!

This amp is very solidly built and it looks great sitting on top of my MG412 cabinet. Classic Marshall stage presence in looks and power! The onboard effects are very useful, just take the time to learn how to create your own sound. I have had two other Marshalls and never had any significant problems. The JCM set-up never gave me ANY trouble, and I had the first Marshall Solid state back in the 80's that I pretty played on 10 all the time.The only thing that ever happed to it was the ground wire screw got loose one time. I purposely pushed that amp to the limit for years and tried to blow it and never hurt it. It was indestructable!

For me this was the best investmant equipment-wise I've ever made. Bang for buck it has no equal. It's got it all. The sound, the power and the looks of a rock star at a great price. Just with the 2 enclosed speakers I could go any where with this amp. But you can also hook up 2 8 ohm 4X12 cabinets in stereo and probably make your ears bleed.

Marshall MG250DFX
5
GUITAR CENTER HOLLYWOOD,CA I PAID $499.99 TO MY SURPRISE IT IS A BAD ASS LITTLE COMBO PRACTICE AMP I ALMOST BOUGHT A FENDER TWIN REVERB , BUT AFTER TRYING THE MARSHALL IT TOR UP THE FENDER ALL TUBE GO FIGURE SOLID STATE OVER TUBE

SO FAR I AM PRETTY PLEASED

This review was originally published on http://www.musicgearreview.com
Did you find this review helpful?yesno
»
Read the 20 user reviews on the Marshall MG250DFX »

Marshall MG250DFX manuals and other files