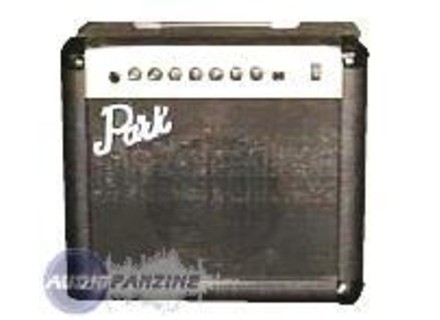 sebastien.groskahyou's review (This content has been automatically translated from French)" A good sounding amp work nice!"

Although fairly simple configuration management gains two of them is not obvious at first glance (that's two floors amps. The manual?, I've never had (used).
I always got the sound I wanted with the whole is to trust his ears and adjust accordingly (adjust according to the sounds of the guitar)

It has always adapted to my style of music. You can spend the rock to blues to hard rock. The clear, although quite cold, is quite nice if you reinforce the bass.

We have the right to several interesting sounds with this little amp: Clear lens (not really because of the heat transo) Crunch bluesy overdrive rocks lightweight, full-bodied overdrive for stoner, aggressive distortion (although cold) for the hard rock ... This little amp is quite versatile.

The trick is knowing how to manage two wins. For a clear mind approaching lights I put in 12 Gain A and Gain B to 09h, it gives a little grain.

It is important to put some treble to have a beautiful sound on this amp (I put at 11am), and overloading a little low (15h) for mediums is to taste (I personally put to 14h) .

On the spring reverb is quite nice, you can easily have its surfing. This is not a model of its kind, but it allows her to have a nice home. Speaking of which, I would add that the volume is not to push beyond 14h (excluding clear sound) for not having a sound that becomes disgusting.

I mainly played with an Epiphone G400 above (over 10 years), but in recent years I have used it with other guitars (Telecaster, simulated strato ...) And, provided it complies with the identity of each instrument, it is easy to sound right.

What I prefer is rather effective overdrive. What I like least is the thrust distortion and high volume.

I have 16 years and I have never had to complain, it holds the road and never had problems! This is my first amp, and despite all the stuff that I have, I still play it from time to time. I even bought one for my wife at a time (a G10 without reverb). G10R is found for less than € 40 today, and believe me it's worth it.
I really like both gains control adjusts the sound.
If it again, I would G25R price at the time, but I did not have the means.

Overall Rating 7
Did you find this review helpful?yesno
»

Note something fundamental (to me) is pure ANALOG, numrique nothing, and nothing that has made all the difference. what a wonder ...

No need for manual, everything is done simply and intuitively, nothing complicated.
It is easy to get her quickly with this amp, and its correct carrment to see if I look at what is on the market of cheap transistor amps numriques now.
Spcial say anything. So there is no multiple effects that never end, but it is the excellent, really excellent basis for an amp RPET home in his room or play two three in a small pice. Trs good foundation.

Frankly amazing for the price, the limited size and the quality analogue is gnial. I tried many small amps modlisations etc but I always found that something was wrong with these amps .. They are terribly cold and me. This little amp does not prtention high-end, but for me it's better than what is found for almost 150-180 euros numrique sometimes for the simple reason that it's makes the ear is enjoyable and warm. It is not cardboard, not cold. That's the great quality .. the rverbe it is also not numrique .. and yet how happy ... Perfect for that little blues amp, but not only. It gets pretty sounds above the crystal. As a small hritier worthy of Marshall, this amp gives a lot of small potatoes for 10 watts, and the distortions are quite monstrous for HP so small. One can easily spend just to heavy metal crunch with both SETTING THE legalization and gain two can play with sound. Jou with an Aria Pro II TA 60 (pickups Gibson United States) is simply a pure happy.

Excellent value. If you find it in time and that you are not looking primarily as an amplifier that makes multi-purpose, just to play in small pices for you entrainner ... go for it! He does not score much more today and it is frankly a AUBN. Pay 40 euros, I do not regret at all, he did not envy his confrres 150 euros if it is the effects ... but it is not the vocation ... I Rasht happy this amp if necessary. I actually spent time to find it!

blaez_minkoff's review (This content has been automatically translated from French)

Park G10R
3
It's a transistor amp.
10 Watts (15W after the change of the power IC).
Equipped with an HP 8-inch and 8 ohms.
With an instrument input, headphone output.

For settings:
- Two gain settings, a rather brilliant one more bold;
- EQ bass, midrange and treble;
- Setting the reverb out again;
- A general volume.

Ultra simple, there's nothing to say.
The most complicated part is finding the right mix between the two gains.

The sound is pretty ugly as all the mini amps for fun in the apartment but it's enough.

The bass is really not great probably because of HP.

The sound of the reverb is very metallic. If you put the reverb thoroughly with lots of gain and gives you a kick in the amp that produces a sound quite fun.

This is an amp cute and cheap. The mini combos tube (valve junior epiphone, fender champion 600, etc..) Are probably better but much more expensive (I bought mine 200F/30 € in 1998)

There are a few times I change the preamp the JRC4558 for TL072IP and TDA2030 Part amplification for a TDA2050V. Hits for € 3 component, and it improves the sound a bit. There is more dynamic, less noise and more power (15watts).

Added on 01/11/10
I added an external speaker output. It's super simple to do even more than the hole for the jack is already in the metal box. It is hidden under the back plastic. I am amused to connect my cabinet mesa top and rendering is greatly improved with an output level sufficient to repeat with a battery. Obviously it does not always worth a good tube amp.
Did you find this review helpful?yesno
»

Park G10R manuals and other files