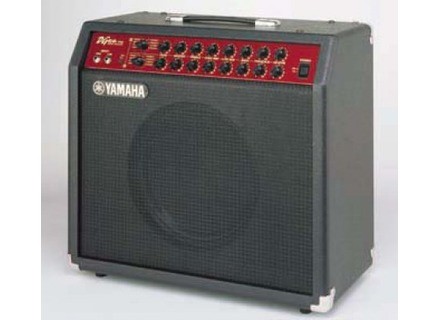 Yamaha DG60-112
5
I paid $680 (Canadian dollars) in Quebec City. I compared many, many amps before selecting this modelling amp. I was looking for an amp with versatility in order to play a variety of different styles of music. (Something that would not only please me but my daughter as well).


I looked at Fenders, Marshalls, Crates, Peaveys, Line 6 and found that I actually preferred the Johnson JM-60, the Tech 21 Trademark 60 and the Yamaha DG80 (112 or 210). But with some of that versatility comes the price tag. I tried both single coils and humbuckers on this unit and I was amazed with the sound and tone achieved by both. I play a Fender strat and I would rate the TONE I get from this amp a TEN.


This amp has awesome sound and tone versatility. Very nice footswitchable dual channel setup with independent controls for EQ and reverb. It has 8 usable preset amp types: 2 Lead, 2 Drive, 2 Crunch and 2 Clean. The owner's manual includes a chart with 16 preset factory sound settings to get you started. (A variety of Country, Blues, Jazz and Rock sounds). It has a effects loop and a line out/headphone jack (which passes through a speaker simulator - for recording purposes). The regular user friendly features on this amp are versatile enough for me. My daughter and I use the headphone jack for late night and/or early morning practice.

What it does not have: NO chorus, NO tremolo, NO delay, NO tape echo, NO digital memory, NO exterior speaker jack. If I really wanted all of these features I would have selected a more expensive modelling amp. Like I said before, the regular user friendly features and awesome sound and tone versatility of the DG60-112 make it the perfect modelling amp for me.

Made in Taiwan...speaker and digital processor made in USA. This amp does not only sound good, it looks great as well. Built solid, weighs 40 lbs. One year warranty. I haven't owned it long enough to talk about reliability.

My daughter and I use this amp for bedroom practice and band rehearsals. We will also use it for recording. I have been playing for 25 years and my daughter for 3. (She loves it as well...she can carry this one around without help from Dad.) This is the best modelling amp I could find for TONE and for the money.

john1968's review (This content has been automatically translated from French)

Used live and in the studio it's a good amp ...
Did you find this review helpful?yesno
»

Yamaha DG60-112
Modeling amp like the Line 6 and consort except that there was more like having a conventional transistor amp.

Simplest would be difficult: there are no menus! Everything is in front of you, like a real amp. Warning knobs are very sensitive and I sometimes settle the point to get what I want. I guess that is the active EQ. The only thing is a little heavy trimming is internal menus - noon, footswitch, speaker emulator. But we do not often ca. The connection is very complete with a line out very well.

Then ... I'll put notes. Clear sound: 10/10, which is funk or jazz or Bossa, cash or Strat guitar has all the clean sounds are superb, especially the reverb and delay are very good. The sound is slightly compressed Fender which is very flattering. In short, it sounds great even at low volumes. Ditto on the line output (with speaker simulator set to 210): the sound is very very realistic and downright pro (I play on stage with direct connected console).
Sounds Crunch 10/10: the you will also sing and cry: close your eyes and you'll feel like playing on a tube amp .. already pushed. And yes! This ESR hardly believable. It goes ACDC Robben Ford, Scofield, Mike Stern and why not SRV. Very good.
Sounds saturated 8/10: the one descends range. Blame it sound a bit too compressed. But I'm bad because I use a MusicMan Luke with EMG pickups are already compressed ... That I am a fan of Steve Vai and blond wigs, the sound suits me perfectly. This is THE sound hard 90s. We will not do with Nu but still plays in this style huh?

Modulation effects: 5/10. it's not terrible, really. ca ca can help because the fact but it is not really inspiring. Anyway why I prefer pedals.

I long and I'm a big fan of the DG (I Stomp) because I like to have a good sound at home. Sure, if I did that scene or if I lived in a basement I would take a Boogie cranked. But in Paris, the DG is better. On kers at the price we can find - ditto for the DG stomp - ie 200 euros is a bargain. It is three size above Line6 and Vox. And I have every had!
In short, yes I recommend it.

First, choose the correct input (LO Microphone powerful microphones to low HI).
Then very easy, four types of grain (2 colors each), volume gain LoMid HiMid highs presence reverb. For the bottom line the same thing ...
Impossible to get lost, intelligent design.
However, it appears that the departure of the effects loop depends on the master volume, not the most logical but it works good as I say nothing.
on the other hand I rattle against the fact that headphones the sound is raw, the effects loop is not taken into account. It said the onboard reverb is awesome so ...

The sound, I tell you. Very detailed, very rich in harmonics, hot, it's amazing.
This amp is the choice of Kotzen, Bullock and co, and I understand why. Note that sounds very convincing are less saturated (too much compression, so unclear), but everything else is falling steeply.
Big 60 watts, this contraption makes a noise. Nothing like a behringer GMX212 yet credited with the double power / speaker, behringer to the niche (tail between its legs and more).
I compare peavey bandit Transtube usa, randall rx120d 412, fender bassman, roland bluescube 310, 412 and marshall. I much prefer the yamaha but I numetal not play, why the randall is cool. The bassman (2005) is steep and rough in saturation, not great. The roland is too wily, too brute. The marshall is nice, airy and intelligible, but know almost nothing else to do, and you have to play hard or no sound.
I would say the yamaha stops to van halen / iron maiden matter saturation can be used, and rather large as soloist bestial rhythm.
The expression is its strong point, all the nuances emerge great, a treat for musicians say more sophisticated.
Very easy to adjust, two mediums more presence is very useful to get what you want.

I'm looking for a second, says it all.
It is my perfect amp, but holds the road.
The wealth of sounds is hard to describe, play another amp just after outlines their blandness / lack of sharpness / etc.
Curiously, the only amp I s'aapproche that this kind of sound is a Vox DA15 with a greenback in it. Yamaha Korg have produced it (which has Vox)?
A brand any good amp, must-have.
I press the point home, I had mine for okaz, new, for 110 euros (or less than the celestion greenback that I put in the Vox DA15 ...).
Buy if you find!