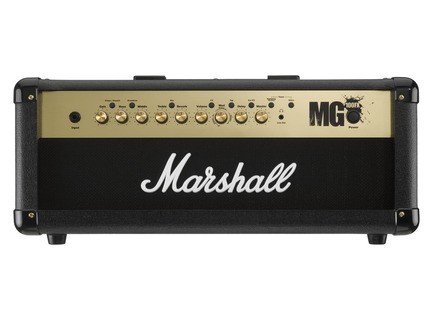 Marshall MG100HFX [2009-2011]
3
The Marshall MG100HFX is the updated head version of the MG100 head that has been around for a fair few years. It's meant to be a good amp for beginners who want to have a real Marshall stack, but can't afford the hefty price tags of a JCM800 or Silver Jubilee. It's a 100 watt solid state head that features four programmable channels (think Hughes and Kettner Switchblade) and has a few built in effects as well. It basically takes the idea of the clean/crunch/OD1/OD2 system that has been used on Marshall amps like the JVM and brings it to the MG series and combines it with programmable channels to give more options to the user. Here's a full list of specs:

Tap Tempo
Use tap tempo to set your delay times as easily as tapping your foot. Tap Tempo switch is used for the Delay effect only.

MP3/Line In
Jam along to your favorite bands or personal recordings by connecting to your MP3 or CD player to this convenient 1/8 inch input jack.

Headphones & Line Out
The Headphone/Line out provides speaker emulation, so you can hear your guitar like its being blasted through powerful speakers or record direct to a source without using a microphone.

Damping
Make it sound like your using 2 completely different amplifiers. When Damping is Off the power amp response resembles the feel of a classic power amp with emphasized middle and limited bass and treble. Switching Damping On will boost the speaker resonances both in the bass and high frequency ranges.

FX Loop
The FX Return socket on the rear panel is used to connect the your favorite external effects pedals or processor. The FX loop is series and set at instrument level so both guitar FX or professional units can be connected.

Getting a good sound out of this amp is not difficult if you don't expect to sound like the pro level Marshall or Mesa tube amps that we all know and love. The programmable channel layout is a welcome change from the dual channel layout of the old MG amps, which was clumsy and hard to balance. The ability to store presets and not have to worry about balancing things like gain levels or EQ settings is something that is good for younger players who just want to jam. The onboard amp models and effects obviously don't sound stellar but who am I kidding if I said I expected this to sound like the tube amps I love. It's definitely an improvement functionality wise on the previous model though. Do the sounds stack up... read on.

The Marshall MG100HFX is an amp that is designed to do many different sounds in general for the player who wants to go from clean to mean and everything in between. The clean tones are decent. They lack a lot of the sparkle and punch that I look for in a clean tone but for solid state cleans they're fairly good, especially with effects like chorus and reverb applied to them. The crunch tones are a weak point. I find that crunch tones like that rely on subtle tube breakup to sound good... these just sound forced and pretty fake to me. The OD1 and OD2 modes are good for what they are. They're a bit compressed and scooped sounding for my tastes but they have a nice low end punch to them too that is enjoyable for an amp of this price range. It's a decent amp for anyone who wants to play rock or metal on a budget for sure.

All in all I think the Marshall MG100HFX is a decent enough amp, and it's certainly an improvement over the awful MG series of old. There are some better options in the price range such as the Peavey Vypyr amps, but if you want a "real" Marshall head for $350 new, you can't really go wrong here. The matching cab will bring it up to more, but it's still a decent deal for the aspiring rocker.

Marshall MG100HFX [2009-2011]
3
Marshall has gone way down hill in recent years. Their JVM series amp sounds ok but nothing great or spectacular. There last newest amp that was decent was the Marshall JCm 2000 Dsl 100. That amp was great workable amp that sounded good and had the right blend of tone and features. This amp is the MG series which is no tubes but all solid state tone and sound like garbage.

This amp has four channel and all of them sound about the same as far as soul and feeling. This amp has no feeling at all . You cannot get any type of dynamics or feel in a solid state amp. You get a bunch of on board effects built right into the amp which is nice for the beginner guitar player ho wants an all in one amp set up.

The one saving grace for this amp is the FDD feature. This gives the tone a bit more girth and beef that makes for the tone to be more like a tube valve amp. It will not quite make it completely accurate but will have enough boost int he tone to make it worth listening too.

The amp does have some decent sounding effects like the delay,chorus, phaser, and flanger. You also get some reverb but that is on a lot of tube amps as well. These effects are the basic most heavily used effects that any guitar player would use on a recording session or in a live band setting. You get a very usable sound out of these effects and make it easier to not have to carry around a pedal board to you gig or rehearsal.

AT new these amps come in right at around $359, which isn't a bad price for a 100 watt head. Why you wold need 100 watts of solid state power is beyond me. I would recommend this amp to anyone needing a loud practice amp. I would not gig with this thing or bring it out to any band I was trying out for. So a practice amp in home is where it would stay and to why I don't need 100 watts of power.

Doherty's's review (This content has been automatically translated from French)

after next for music lovers!

I play surf music over playing with mediums and chorus / delay and lareverb course
and admit that it sounds pretty
while few are actually spent jazz, blues, rock, metal, reggae ... but not with sound david gilmour course
these are even nine amp input range c versatile mjc very good for the marriage of uncle jacky for a solo line on the Indian summer, the festival of music ...

c amp that I use the more versatility, c certe not a mark or a soldano v
g but not the means for these amps after
Ca 100w transistor has not spit a little evil and be quality without a crisis of the old next to
for the price and versatility these a very good amp
After when you buy a sandero to go to a job class c least porch but if your in traffic every morning and you flip that you are the picnic in the street a dacia do better the case

GutsMiura's review (This content has been automatically translated from French)

configuration is quite simple we easily get the sounds you want without breaking your head over this
the manual is very clear like I know my equipment up so I'm not ashamed to say that I read from one end to the other in fact I would go next to a lot of stuff if I did not do
The amp comes with a footswitch clean channel and two overdrive a crunch
I'll be honest if you want a good sound should be a minimum fit because he did not hurt to be beautiful ca XD mg remains the overdrive may sound good but lack of fishing the sound is not great but can be living for sounds good rock 60's grunge look but the bulk metal and heavy distortion be better equipped
the other hand is clean NI.QUEL yaurais this factor had not I never would have taken me to play a zoom g2 pedal that I use primarily pedal tuning but also for a thrash metal sound and I use a pedal boss ml-2 metalcore with clean and adjust it's paradise

concert in me enough to do it because is very clean ... CLEAN x)
the trick is knowing how to adjust
Then with my pedal assembly I get all the sounds I want almost
I on my pedalboard includes the footswitch with 3 channel set style as history not always have the same sounds dailleurs I use as 4th bypass (that is, the utility XD)
I do not hate any sound of this amp because I like even when touching story but I would stress even when its big lack of life except for very clean which is just kiffant

I played with for 9 or 10mois little pressure
this is my first stack and malgres head that I am amply sufficient account even when the change in favor of a bugera 333xli infimium
I have a lot that they are easily transportable its clean sound and I like less saturation
value for money, however, is horribly zero it costs way too much in the head costing 300th Place in 100 more and you have a bugera head lamps ditto for the speaker even if the speaker is properly treeeeeeees
if I buy this only to have a better sound in concert to change 30w and because I had the opportunity not to have its original price and therefore I recommend to the new purchase