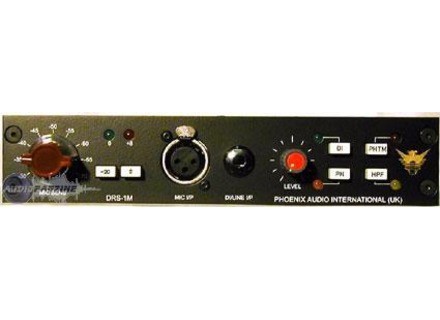 Setting could not be more simple.
Just a shame it does not have to be interupteur on / off.

It's like Neve.
I use it primarily for voice, coupled with a 4040 AT home studio, or a Beta58 available. A reserve huge gain, and superb sound quality. Before owning, I was taken on my SOLO/610 AU, which has much less headroom, and had a less efficient sound (on my voice in all this), although satisfying nonetheless.

Also used DI with a telecaster, sometimes low. No complaints, it's perfect.

3 years now that I use. Knowing at the time I had reached 1000 € at Funky Junk, I can only speak of an excellent quality / price ratio, although today its price has increased significantly.
I do not have a lot of points of comparison, except with the AU SOLO/610 which is still cheaper. Still, my AT4040 torque / DSR-1 never took me in default. If one day I needed to improve the torque, which is obviously the micro change.

Tabyzax's review (This content has been automatically translated from French)

Phoenix Audio DRS-1
5
The DRS-1 is a micro prampli and a box of direct high-performance format 1 / 2 rack 1U.
The DRS-1 is the same fuel technology Class A "All Discrete" de Neve, and the difference in sound that is also widely heard rsulte!

One branch is working right now!

I could just say "It's a great machine, etc., etc."
To this I prfr make a blind test with two prmpli sounding trs close (according to the manufacturer), so as not to compare apples and oranges!

So I have two runic pramps: a slice ct NEVE pure juice on the other, the Phoenix Audio DSR1.

As for microphones utiliss for this test: an SE Electronics ICIS, a BPM CR-73II, StudioProjects a C1, a RODE NTK ...
CONCLUSION: Qualitatively, the two pramplis play in the same court holding hands, that!
I mean by that if I had a choice between those two devices in terms of quality I would choose the DSR1, and for good reason!
Indeed, one can obtain the DSR1 for 1200 Euros.
TB NEVE, simply to bring 4000 Euros.

To be done all honnte, I must admit that there is still indeed the difference between the two devices.
According to the microphone used the DRS may have a more round sound reproduction, while the slice is NEVE rvlera more "hard", less music, especially with the RODE NTK or Phoenix Audio CIHI.

By-cons, with StudioProjects C1, Unit NEVE back on top, because the C1 is a microphone that is greatly AIGS before - I got too! The DSR1 will be less prcis least in this case the crystal-clear ...

However, these remain Difference in terms of personal and aprciation rsultat Search.
The ultimate goal of such sound recording is not to be taken back into the mix??
Oh, I forgot: the DI that the possde DRS1 and that portion NEVE.
I know, I know, the DI, it is often a quick fix when you do not have a guitar amp / bass.

However, this is Royal DI for bass.
Modra in my enthusiasm, I would say that the DI respects as much as possible the signal that he injects!
It is currently the best DI t given to me to listen!
So if it's SERIES, why deprive yourself ...

Finally, given the price trs tightened relative to 4000 Euros which should be split for a slice acqurir NEVE original
I can not fault this dcemment pramp - and God knows I dtest complacency of some opinions ....

So if you are looking for a typ NEVE Bugdet reasonable
n'hsitez more: think Phoenix Audio.

PS: no I'm not the balance of the manufacturer
PS2: Following this test, I regret only one thing: not having bought the DSR2, namely two DSR1
in the same rack! By-cons, the price of DSR2 (2245 Euros) is not exactly the
same price range ...