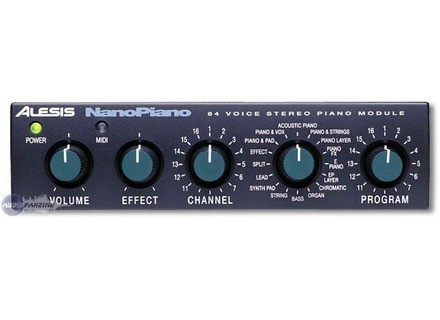 Alesis NanoPiano
4
If you are looking for realistic piano sounds than the Alesis NanoPiano could be just what you have been looking for. The device itself is pretty small and its not rack able. Just looking at it made me wonder how they got all those good pianos and organs into this little device. The module itself doesn’t have a screen like other modules it just has a few simple knobs but the knobs will still give you control over how you want it to sound just not 100 percent control over it. Its also kind of weird to navigate through sounds with a knob. Instead of having a small LED screen and scrolling you just turn a knob that looks like a lot of knobs on an audio interface. Actually the whole module looks like its an audio interface at first glance.

Set up is really easy, no manual was needed at all you would only need that if you need to learn how to set it up in your DAW but if you know how to do that you will have no problem getting it work right.

Sounds are realistic, especially some of the pianos are very clean and natural sounding. I don’t think there are enough effects just because I love to use a lot of effects In my music but I guess if you don’t like effects than this will work with just some basic reverb and such. I think all the sounds are pretty decent I really don’t have any that I think are bad. There are some room for improvement though.

Overall, for the price (that it is now not when it came out) its worth it. Back when it came out I didn’t buy it because I could use that money for a more useful piece of gear. So I purchased it years after it came out just out of curiosity when I saw it at the music store. I am still an owner of it and still love it.

Tryph's review (This content has been automatically translated from French)

Alesis NanoPiano
4
Small expander (smaller than a car radio, I scratch with an adhesive velcro on my keyboard) 16 banks of 16 sounds (256 so ...) in non-editable presets. The piano sounds are correct for an expander of this generation, each sound has an adjustable parameter ("effect" of the second potentiometer: it is often a reverb).
The MIDI channel (a socket IN, OUT and THROUGH a) is assigned (third knob).
The fourth knob selects a sound bank, selects the fifth sound in the bank.
Powered by AC adapter Alesis.

What bothers me the most: no display light, which together can be difficult if one wants to change its governance and the black light was out on the set ...
It's still very small writing ...
Often it is best to remove the factory reverb which sheds some light piano sounds.
Otherwise, it's hard to be easier! I can not remember if I had time to read the manual ... Not really need!

Sounds interesting pianos, electric pianos (Fender Rhodes) and a few tablecloths. The organ sounds are pleasing (in my case I have a Hammond ...).
For the price, it is an excellent compromise.

I use it since 2002, not being a pianist, piano sounds I was looking for reasonably priced and with a minimal footprint to play a directory 50's-70's using a digital Hammond as a master keyboard, it's not bad. I did not find a better value to use as I was aiming.
Did you find this review helpful?yesno
»

Ny Batteri's review (This content has been automatically translated from French)

A pre-defined by its effect, dosage adjusted by the knob "effect"
A hard switch for midi channel
16 banks of 16 sounds each thematic
knob an overall volume

No headphone jack, too bad!
No inter / Off either, it branch, period.

1U, 1 / 3 wide (can be fixed on the bottom)
It is built "American" good metal chassis, electronics serious

In short, the bare necessities, but good

Setup could not be more simple. It took over 5 minutes into the beast, and the manual (well done, yet) will remain at the bottom of the box.

The philosophy is really that of the sound module. We define the midi channel (not need to be an expert), we choose the bank and the sound and playing.

The edition is based on the manual available via SysEx, but nothing can save ... No interest so ...

I love acoustic pianos (the No. 1 is a true stereo). It's really for the bank that I bought this module. Bank 2 is devoted to piano + other mix is ​​not bad either.

Note that some piano sounds are transposed variations (+ or - 1 octave) of other sounds in the same bank. It does not look like much, but for me that was looking for a sound module to connect a small keyboard that had no other features MIDI In and Out the catch, I was sometimes used.

The electric pianos are correct but not stunning. Note a "No quarter" will remind you of things ...
The organs are correct, but the lack of editing and especially the lack of response to the modulation control may be felt! It's pretty weird, no way to get a little Leslie. Yet other sounds respond very well to modulation.

Other sounds a bit anecdotal, but they can help. Bass, Lead synth, strings (not bad).

In general, a lot of sounds seem to be from the same banks that the QS series of the brand.

For effects, they say that the processor is from the Quadraverb (I do not know).
So its a fact, which the dosage is done by the dedicated knob. This is a reverb (correct) most of the time.

It is quite expensive at the time (in 98 3000F, I cry when I see his side now!), But honestly it far surpassed the competition in piano sounds.

If you, like me at the time, a MIDI keyboard with sounds yuck and that you are looking for beautiful piano sounds worth it. In home studio may also have its place (it goes very well in recording).

Note that it is very compact and very portable. If you do not know on what you play, take the backup in (it saved my life, and finally the ears several times). And it is tough, mine has fallen several times more than 1m high and is doing well despite the scratches. Only the external power supply dropped me an evening concert, and attention is the AC not very easy to find.

See all 36 photos of Alesis NanoPiano »