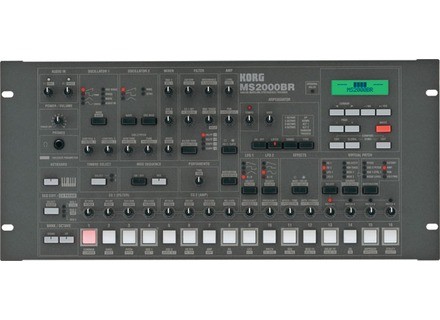 Korg MS2000BR
4
I won this piece of gear via the Korg incentive program...I am a dealer.

It has amazing fat analogue like sounds to it. Especially for bass. A previous user mentioned that it was but a "toy" because of a lack of user preferences. Initializing patches I suppose. That reviewer was wrong. You have more than one "scratch" patch to start from, as you can initalize any of the programmable patches.

The lack of control w/ the distortion.

Built well. Plently of knobs and buttons for tweakers.

This is a fat sounding analogue modeling unit. Great for bass and fat leads.

Korg MS2000BR
4
Purchased from a store, I paid $1000 Austalian. It was an impluse buy, and also my home rig has no synths (as they are with my live rig.

It truly has a phat sound and great control, and Korg's in built delay's for me are second to none. I am very impressed with it's vocoder, as this isn't a function that I required as I already own a stand alone unit, I will be using it now and again. Everything is marked clearly and arranged neatly, and I really enjoy the "virtual patches", they make you sound like you have three hands. Also a few presets are out of this world. And don't forget about Korgs little feature of the previous setting led that always keeps me smiling.

Lack of user patches, this fact turns this great machine into nothing but a toy. I pride myself in the creation of my own patches but there is only one inital patch and no function to create an inital patch. Also the osc mixer could do with a review, instead of two knobs for osc level, why not have one knob with osc balance and utilise the amp. Some of the presets are quite lame, but only redemed by having enough juice to create great ones. Also the fact how you are required to switch off the unit before switching the line to mic input is quite inconveniant.

The unit itself feels very solid, and I feel very comftable carrying it to live gigs. All the functions are responsive and the filters sweep smoothly.

Definately a fun unit, it potenially can sound quite phat and professional, but does lack one or two features which places it in the toy catergory. Definately value for money and I will show off this unit with pride on stage and studio as at the end of the day, what matters is how good you can make it sound. It has flaws, but also many vitues.

The Mystery Islands MS2KxR in beta 1.0.0

Published on 07/21/15
Mystery Islands announces the availability of the public beta 1.0.0 of their MS2KxR editor/librarian plug-in for the MS2000 Korg synths.

An editor plug-in for the Korg MS2000