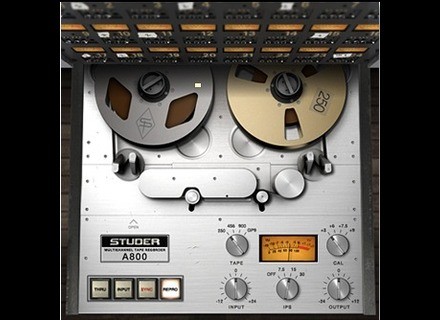 Studer A 800, Tape/Vinyl simulator from Universal Audio in the UAD Plug-In series.

otavioreis's review (This content has been automatically translated from French)" Excellent, but expensive"

easy setup. No need to book.

It is a little greedy, but it also depends on the UAD cards you have. I have an i7 with UAD2 quad. I'm off to turn it so ...

I tried 4 or 5 types of simulation models and I can tell you my opinion:

Studer A800 UAD (Universal Audio): In terms of quality and versatility, I think it's by far the best, but it costs $ 350. It costs more than 2 times more expensive than the Magnetic and over 14 times more expensive than TB Ferox. I confess that I bought the Studer and I am very happy. But it's too expensive, even if it is the best for my taste. But it has another advantage to owning a UAD DSP cards, the DSP which relieves the CPU. And here I can say that it makes a difference too because he is greedy.

TB Ferox (ToneBoosters): This plugin is a slap for me in second place with the Magnetic. Although Magnetic is a little more versatile, the ratio quality / price is unbeatable TB Ferox. And the icing on the cake: ToneBoosters sells its entire bundle for only $ 20. Thank you Eloquent

VTMM2 (CDSoundMaster): I've always been a fan of CDSoundMaster, but now I am very disappointed. The bof bof bof VTMM2 is ... It is a bit too subtle for my taste. It costs $ 79. Frankly, it's best Ferox BD or TDS Ferric.

TDS Ferric (Variety of Sound): This one is gratos It is not so bad, but it is not at the level of the first three, it is not very far. I think he can still make improvements to the bus.

If you do not spend a penny, take the TDS Ferric and you will not be disappointed. However If you have a little money to buy the TB Ferox ToneBoosters. It costs less than a meal in a restaurant and you'll be really happy with the résultat.Vous can work with those two: Ferox inserts on the slopes, Ferric on the bus.

Otherwise, if you have a card UAD2 and you take the money Studer A 800. It is the most expensive, but it is the best. However I blame him for his value for money that is abusive, when compared to competition.

Anonymous 's review (This content has been automatically translated from French)" Hmmmmm, it&#39;s warm in there."

Universal Audio Studer A 800
5
UAD typical installation. There is nothing to do. Perfect.

I was really not a fan of the processing software, but it was before discovering the DSP and plug-ins from Universal Audio.
The Studer A800 is the latest addition to the collection and it is really stunning, subtle, but stunning.
He brings a "warm" thanks to its decay in the treble and the bottom of his typical "TAPE".
In mixing, its effectiveness is really felt after summation of the slopes. This is where you hear the difference. Thanks to the "gang" control, you can control all instances of the plug from one. Convenient for the bypass and to switch between different controls.
It is also the first time I am convinced by a "drive" digital. Great on drums and voice.
I find Studer very musical. Like the IPS mode 7.5, dark well, a bit like Joe Barresi. (My master)
In addition there is a tendency equalizer and much less compressed behind, a good sign.
It is now routinely on all entries in my sequencer.
NEVE 1081 EQ back and forth.

Published on 12/19/10
Universal Audio has announced the release of the Studer A800 Multichannel Tape Recorder plug-in for the UAD-2 platform.

View all 2 videos of Universal Audio Studer A 800 »