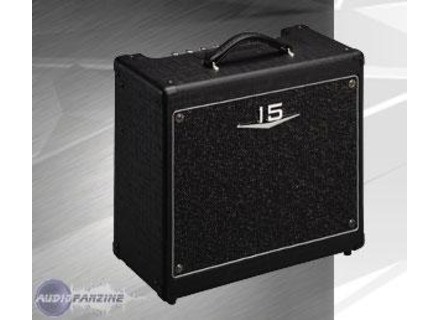 Crate V1512
5
The Crate V1512 combo is a class A lamps, with four ECC83 and two EL84 for power. It dveloppe possde a fifteen watt celestion hp thirty centimtres. The panel includes an equalizer CONTRL three bands, one SETTING THE gain, volume control and gnral the rverbe. Boosteur adds a bass. It is possible to add an extension cabinet. I regret the absence of an effects loop. It forms a "vintage", is dressed in black. Its finish is exemplary. It is manufactured in the United States, but strangely, does not Crate registration, but only "V1512". Its weight is approximately seventeen pounds, which is trs correct. This amp is the ERRF of V5, V30 and V50 (utiliss by Billy Gibbons of ZZ Top)

This is the kind of amp "branch and I'm playing." We immediately sound, but s'aperoit later than SETTING THE equalizer can be more subtle parat there at first. The manual is in English and in French (it's the least we can do for hardware sold in France). One regret, however, the representative of potentiomtres is almost imperceptible. It should be applied to read the value displayed. It incomprhensible: the readability is THE FIRST thing that is required of a potentiomtre. Forcment, arduit Rating: 8

For blues, rock, pop or jazz, it works well trs. The clean sound is fabulous. It is hot, dense, and compress lgrement possde lot of attack. With one strat is slamming and crystalline wish. Several people told me that a is the Mesa Boogie, I will not comment the above, I do not know enough Mesa. As a Class A, you can play with a volume loud enough, without saturating. Crunches are of the same ilk. For distortion, it is superb, given that it is a Class A and tration, the distortion is not the strong point of this type of amp. However, it's blues or rock distortion. To saturate, you need a high output level guitar (Les Paul Standard). To the most modern styles of music, must be added a collection outdoor pedals, but it works well trs. The rverberation, in turn, performs its function without fail.
In terms of power, I think it's IDAL. It dcoiffe enough to play on small and rptition scne. Any fawn, in public, it is better to recycle the amp that we have a fifteen-watt or a percent, to balance the sound. But the fifteen can harness the power by heating lamps. (I never understood those who trimballent one hundred watt amps lamps, forty pounds, and use the volume two in a bar one tiny o lack of space ...) That said, I jou Crate with no recycling in a bar in front of forty people, we played hard, but I have gure Exceeds half the volume. I imagine that with a speaker extension, a must be even better.
For Crate, large volume, the distortion becomes less prcise, but I think the addition of a collection's outdoor speaker should remdier that. I also think that could be potentiomtres more progressive and linear, but remains trs correct. Attention was not the versatility of a modeling amp with effects Intgr, but it's more modular: we choose our pedals and rolls. As long as the amp possde a good basic sound.

I bought this amp 650 euros. Before I used rgulirement possd or the Marshall JCM 900 and JTM 60, Valvestate rotten, a Fender Cyber ​​Deluxe, a Vox AC30 blue alnico, an trmolo Garen. J'apprcie the quality of sound (including attack and compression), and the simplicity of this amp lgret, as well as his Aesthetics. It is easy to use, trs hot and strong enough, without being too bulky. I regret the absence of effects loop and potentiomtres too small to read. I would do this choice, as in this price range, I still have not seen better.