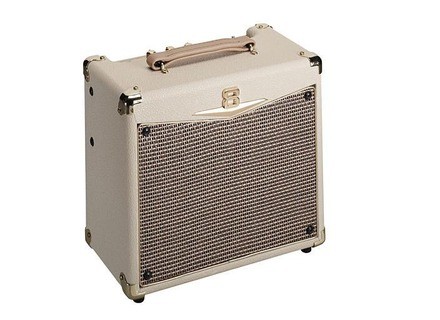 Delivering vintage vibe and screaming tube tone, The Palomino V8 Combo Amp is upscale but ready to get dirty. The Palomino V8 features 5W power from a pure Class A tube circuit, a 10" speaker, and a line out. The simple, powerful single channel has Gain, Tone, and Volume knobs. Crank your Palomino V8 up and dive into luscious tube tone.

Crate Palomino V8
3
I bought this at guitar center in Little Rock for $300.99

I got this amp for practice and playing in churches(some churches don't like the full volume of a marshall half stack) It has a nice warm tube sound. When its about 40 degrees out side just plug in and play this thing and stand around it and you'll feel the warmth in its tone. Its only 5 watts but there class A and they scream. My bass player has a 100 watt head on a ampeg full stack and I can hang with him when he has it turned all the way up. Its a good value. Like the price for Class A tubes and like a seperate gain and volume knobs. nice harmonics. I found new harmonics with this amp than I knew I had.

Can't really get a clean sound out of it unless it's real quite but it is a small amp what do you expect, besides I don't use much clean. I like it dirty. The overdrive tone gets muddy at more than 3/4 gain. when it gets muddy it's hard to tell the notes apart and it kinda blas together. Not like my Marshall. I was hoping this thing would also push my speaker cab so I could get a full volume but It won't make a peep when I plug it in. I wish it had a little better tone, less muddy. Maby I just expect too much from crate? Maby I should have spent more on a little Marshall or Gibson.

Killer looks this thing looks like a million bucks.

I believe it is a good value with prety good tone but don't expect too much it's still a Crate, not to be confused with a Marshall or other tone kings