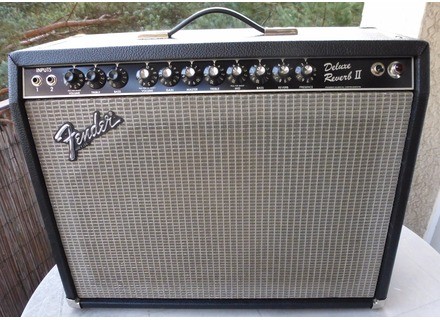 Fender Deluxe Reverb II
4
Just about the most classic Fender amplifier that has ever been created. Fender has had quite a few solid amps such as the Blackface, bassman, Twin Reverb, and modern Hot Rod amps. This is one on the level as those classic amps that have rock n roll ingrained into the dna.

This amp is so colorful and rich with tonal flavor. It makes is hard to think about music without an amp such as this one. The tone that this contains coupled with a nice tubescreamer type pedal is just glorious.

This amp is not hard to figure out at all. The front panel is easy to read and if you have spent 10 minutes with this amp you will be able to dial it in to get a good quick usable tone. There is two inputs and these are for high and low sensitivity or output brilliance.

The amp seems too easy sometimes and I wish they had a little bit more features but that is Fender. They stick to the classic look and the classic features from the days of old. The will probably continue to do it this way since this is the age of vintage amplifiers to be highly sought after. This gets people in the door with the new price.

Glassy, chimey, sparkling cleans shimmering with tone dripping for days are all words to describe the nature of a winning amp for decades. The tone with this amp will leave you satisfied but ready for more. Try this amp out with a nice Fender Stratocaster and you will hear the combination that this amp was made and voiced for.

This amp has so much potential and all you need is some creativity for style and you will have a killer tone that will rival most professionals. Add a nice analog delay to the mix and couple that with the reverb channel and there you;ll have a sweet rich ambient tone that will give more creativity that you can dream of .

These amps are not being produced anymore and will only be found on the used market. I have no idea what these amps are going for in this market, bet you can get one cheap.

I would recommend this amp to any guitar player who needs probably the best clean tone in existence. The versatility of this amp is really endless. It doesn't have much to get in the way of the tone with just a few control knobs and a second channel for a reverb feature. This is a great classic amplifier.
Did you find this review helpful?yesno
»

gibson92's review (This content has been automatically translated from French)" In the big ..."

Fender Deluxe Reverb II
5
Lamps
22 watts
Channel volume push pul bright / presence - Bass - Treble
channel: Drive - Master Vome Severe Acute medium
push pull master with presence and push pul medium with building meduims
presence reverb ..
HP celestion G12H vintage series 70 anniversary
Stand by the back no loops (see the HP and I see its not inrtéret ...)
I mest not 10 because there was no stand by what I did install ..

Plug & play
no need for manual
Ears and fingers
There's a job for the equalization
the good is on ons like all "super" type amps JCM 800 Vox 83 or 75 etc. no need of manual and Mesa during the petrucci on You Tube

I have a lespaul custom, a Fender Rory Gallagher CS, a due imperial half box
In fact for every scratch it sounds even with my squier mini ... when I play well ... otherwise you will Rabiller for breads ... we hear them
I spend RHCP Iron Maiden not passing the Eagles
if I vx big sound just a TS9
The sound is clear between the good twin or JTM 45
California is the saturated ideal and I recognize the sound I had with a TS on a 808 1èere JCM head ...

RARE
I got it on its release in 83 it was not appreciated as innovative ... it was full hack digital techno ...
I bought one 5 years ago there were 2 in France I had a ...
Brave New World 19 kgs therefore amp in one hand and scratches on the shoulder and plays EVERYWHERE ... if the jack into the amp ..

Thomasprs's review (This content has been automatically translated from French)

Fender Deluxe Reverb II
5
Hi, this is the first review about this amp!

Trs complete, just missing an effects loop (a good hacker can amp you a letter)

Excellent, and "breakup" trs cool for 6.

I use it for all styles of music, it's really gnial.

If you find a Do not hesitate one second!

Fender Deluxe Reverb II
5
Caution It is not that of the above foto!

2 inputs face: low and high
2 channels
- Clear channel: volume 1 1 1 treble bass. So there is no adjustment for clear sound in mids but that does not interfere at all. Lower bass and treble means strengthening the mediums for this type of amp.
The volume knob is switchable in bright
- Saturated channel: a volume, a gain, a master equa TREB mid bass. it has a setting equalizer per channel.

Button mid saturated channel is switchable to boost medium (mid). It's almost a third channel so it can be felt on the sound!

For a 2 channel and a reverb knob presence

Connections:
1 output for a speaker of 8 ohms
A line out to record directly to a console
A footswitch input to start the reverb, Like to go to the clean channel saturated
1 input 1 output dedicated to the connection of the spring reverb

We see that this amp fender made in order to restore the original deluxe reverb: all the modern options are included (channel saturated, boost the mids, double equa, connectivity, presence)

The configuration is simpler than a modeling amp.
But the two channels and a half of the boost button and the presence mediums require time to be adjusted properly.

Even if it turns out we get very strong still sound good at low volume. We can play in your room instead of a Vox AC30. But of course, is when the lamps are pushed you can feel the grain appear fender. The EQ is very efficacaces and we have a good sound quickly turning instinctively few buttons.

The clean sound is masterful. The bright switch makes wonder. The equalization responds really well.
It is a crystal clear sound if it (at least with my les paul special), a little dirty. The mediums fart as only amp lights can do.
The more one grows the more natural compression of the sound is musical.

Side boosted channel EQ SETTINGS and combination volume / gain / master offer ample opportunities for her, the slight crunch to saturated (but not without its metal pedals!)
The button responds very well to the presence or écalircir make the sound more present.

As against that of the reverb is very sensitive, the effect is not progressive. Attention to the tact not to drown in all this reverb. This is a reverb to the previous spring, that resonates long. I confess to being a little disappointed with this one. I think another reverb plug on it because the connection allows me

I use it since 2004
It's a versatile amp despite its reputation
The reverb was disappointed. For example, the reverb of the hot rod deluxe seemed better
This is an amp that is connected to the pedals regia. Combined with a Sansamp palette of sounds is huge.
The overdrive sound is not bad but probably prefer there be a good pedal, and the channel will be used for saturated crunch or clean sounds a little boosted
I got it for € 650 the price of a hot rod!

This is an amp that is used mainly for clear sound all the same.
Obviously I do it again this choice.
Did you find this review helpful?yesno
»