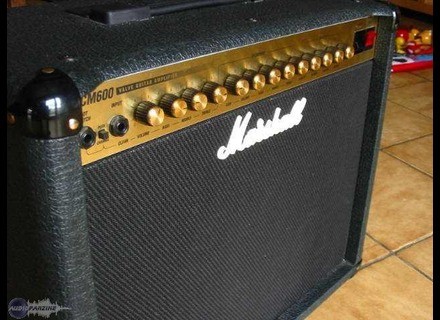 Marshall JCM601 [1997-2000]
2
This is a 225 watt tube amp with one input and a footswitch in. There are two channels, clean and distorted. There are three eqs, one reverb and one volume knob for each channel, and the distorted channel has a gain knob as well. There is also a series effects loop and a parallel effects loop, with a knob for controlling the parallel mix. There are also presence and master volume controls which work on both channels.

The amp is pretty easy to use and setup. It's pretty much ready to go, just plug it in. The sounds aren't too difficult to get out of it at all. The manual explains how to use everything pretty well, though if you aren't used to using effects loops you probably won't get what the effects loops are all about.

The amp does not have that great of a sound. I bought when I was younger and on a budget, and into much worse music than I am now (metal, nu-metal, the like.) The amp definitely sounded better when I bought it, too. I used a Fender Strat and a Les Paul with it. It sounded better with the Les Paul because it didn't feed back as badly as it did with the Strat, but it still didn't sound too great. Over the years, as I would push it to try and get good sounds, the sound started to deteriorate. By now, almost 7 years later, the amp is almost unusable. The clean channel gets little to no volume, and the distorted channel is incredibly muddy (in fact, it was always pretty muddy, it's just gotten worse). I can't say any of the sounds are my favorite. I don't really like any of them. I recently tried playing a new model in a store, expecting that it would sound better than my amp does since it hadn't gone through the wear and tear. While there was more volume, it still didn't sound that great, and wouldn't make me change my rating. The sounds that you can get out of it are a mild, tame clean sound (basically no natural distortion, which I like and can get out of my Fender amps), as well as a muddy distorted sound that might be good for someone trying to emulate Queens of the Stone Age, but not much else. Turing up the low end on the distorted channel makes it really murky and unclear.

I have been using the amp for 7 years. I can no longer gig with it but I do use it as a practice amp when needed. The best features on it are the two effects loops, and that's about it. The sound is so awful that I can't deal with it. I tried a few models before I bought this, but couldn't really afford any of them at the time. I should have saved up a little more. For the price, the amp isn't bad, but I still would recommend saving up a little longer. It'll pay off if you plan on keeping up your interest in playing for more than a few years.

Having jou dj on 100w JCM 800, JCM 900 100w and 50w Silver jubilee I can objectively compare: the rglages indpendants for each channel are super practical and above all it is a low volume amp playable because the master is progressive trs (the 100w jcm 800/900 in mind to play at home than to have no family nearby + (trs) Tolra ...)
Button prsence the rear may be surprising.

In terms of sound, it's good trs Marshall (MA or not Haze Made in Asia I've heard).
The clean channel is ok and not easy to cruncher, but more is its lead channel INTERESTED: a beautiful jcm 800 type saturation but boosts and reminds me of my jubilee in less aggressive: a beautiful trs grain typical of the brand.
The reverb is enjoyable but I use some trs

An excellent amp mconnu, trs polyalent which allows to play home and send scne, with Marshall's (we like it or not) for a low price secondhand trs: a case but I think in a few years the prices will go up!

nikoxx's review (This content has been automatically translated from French)

Marshall JCM601 [1997-2000]
5
60 watt all-tube combo (2 and 4 power preamp)
So There's enough to repeat his concerts and theatrical medium
HP 2 celestion G12T
simple connection:
2 channels clean / overdrive with equalization, reverb, and separate volumes
1 volume fx loop
A master on top of that
Input jack and a switch
behind it was a hp output (8 and 16 ohms)
2 fx loop (parallel and series)
A presence

Most:
- Heat lamps in a combo
- 2 pads of 12 '
- Equalization and separate reverbs
- A general master
the least:
- A simple switch (no reverb manageable foot)
- Restitution limited to large rooms (it's not a 4X12 either, then push it even in the nettles!)
- A bit heavy to carry around the guy! (40 kilos good anyway)

I Chechi a combo for the transportation of stamped and I want to taste all the lamps. I played a lot of combos (peavey transistors and Transtube, fender, H & K, Valvestate) and I had already tasted the heads of JCM 900 and above 800.
I bought it without a manual at the same time must not be made to Polytechnic know how to use ...
The sound of the amp and very typical marshall (rock'n'roll baby!).
As often with marshall, the amplitude of equalization is not great, but after a few adjustments and adaptations including relages with guitars, you get the desired sound.

I was playing pop rock when I bought it but my sound has hardened over time. I find that lack of precision in disto today (I reminds, the marshall's only natural).
It is perfect for you if you are in the blues rock or power pop.
his clear round still in marshall, but get a little something fun playing with the guitar pickups (even double coils)
crunch: the best in my opinion, very bluesy, strong mids and very hot.
lead sound: good, if it is to neo is not really the ultimate tool ... The sound is warm, but when you push it low drool a little, a lot of mid to tranpirent on acute ...

in terms of sound reproduction, pushed to mid-volume, it starts to get cool is hot, the highs come even if we can find that the low and mid chouilla a mix.
The only problem is the appearance of the one-way, it's a combo. Despite the 2 HP, it's either you take full sheets if you are facing, or it gets a little dull if you're a side too.

I use this combo for 4 years but I think change to a head lamp or a rack for more presence and loudness (only grateux the group: it's getting frustrating!)
I'm still attached, he followed me everywhere and I admit that it is indestructible (the lights were changed two times I put Sovtek very recently and the sound is more fit in ) and 40 kg worse it's up!

I tried several combo before, the sound is really hot and my budget it was perfect. Purchased 3500 F during the day, I regret my purchase at all, it's a great amp to cool the grain of heavy rock, punk and blues.

penec's review (This content has been automatically translated from French)

Marshall JCM601 [1997-2000]
4
All Tube Amp, 60 watts, mine is equipped with a single HP. Unless you play with John Bonham's more than enough in volume for clubs or rpeter. I think he never played more than half the power available.
An output line and an outlet for HP supplmentaire, connection for effects loop.
2 channels, volume, and legalization rverb indpendantes on each channel, which is a plus.
A master volume.
The essential is Submitted.

Configuration and use of more simple.Pas need manual.
It sounds Marshal is to say that was not the brilliance of a vox or the legalization of a subtle fender.
Still, this amp offers a broader sonic palette a fender to the extent that we can clear sound from a heavy saturation which frankly is not really the field of fender. It is quite versatile.
The sound balance between the two channels is also no problem.
As for his weight so it's all lamps heavier than a transistor amp but still portable (unless you want a hedge with nitre 100 ...)

It's the sound of the lamps so hot.
The clean sound is good but a little "flat" or neutral. Pushing the channel volume gives a clear background lightweight INTERESTED crunch, the sound takes a little shine and is bluesy, I think one of the best sound of the amp. I use it with a Start and you can approach, coupled with a tube screamer, the SRV sound. But it is also not bad for rhythmic support.
The channel is saturated ... saturated fat is the sound baveu typical marshal. Even with a relatively low level of gain saturates a dj not bad. By increasing the gain compresses slightly and the level of distortion is IDAL for the heavy rock zztop, hardrock, pop rock genre placebo. I think with a team of guitar humbucker friquoter it should be possible with heavy sounds mtal problem without having to leave qqes add effects.
Overall, it seems to give the best sound with the neck pickup in the stratum, both in its saturated clear that what I would say that this amp reproduces more serious than acute, but I did not tried it with my other guitars strat.

I use this amp for eight years and I have only to change lamps. It fully respects the quality and dfaux brand, clear sound right without me, and saturated fat and warm, but when a marshal is rarely achte for clear sound .. .
In comparison, I jou qqes time on a jcm 900 combo and a jcm600 sound better I think.
I had bought new in 4900 for 98 francs and the era it seems to me that there was no real equivalent in any lamps. C'tait is more expensive, fender, mesa, etc.. is not great and often hybrid, Peavy, Hughes and Kettner ...
So I think a good quality c'tait price. Today I saw some qqes cars on the net between 500 and 600 euros, but there is no beaucoup.Je MODELS think the new 60-watt lamps all cost a marshal in the 950 euros.
O When I bought j'coutais plutt Rock 70's, Hendrix, Cream, Led Zep, so the silent plutt jcm 600 a good choice (default of an old JCM800 sr well ...).
Today j'coute and I play radiohead, dandy Warhol, Supergrass, BRMC ... and for seeing in concert, they all play on vox or fender. Having more than one small (actually a passion) for the Beatles, I think opt for a VOX AC30 as soon as possible.
But if we are to marshal the jcm600 sound should not.
Did you find this review helpful?yesno
»
Read the 6 user reviews on the Marshall JCM601 [1997-2000] »