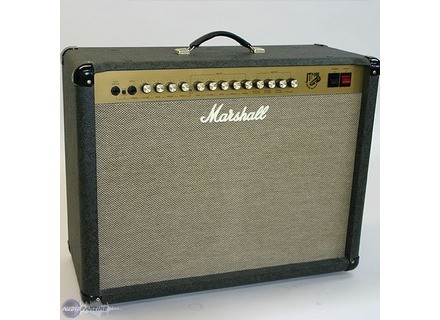 Marshall JTM622 [1995-1997]
5
Back in the day when Marshall made amps that sounded good and took the time needed to build high quality amps not just fast quantity amps they build this little combo. This amp is a big surprise to me because I generally don't like the combos that Marshall has come out with. The sounds very sterile and boxy to my eras. However this amp sounds just as good if not better than many boutique amps out there today.

These are not new amps so you'd have to find them on the used market. I have no idea what the going rate for one of these amps are used, but I highly recommend picking one up.

- How much power is delivered?
60 Watts RMS, through 2 x Celestion 12&quot; speakers.

- What connection types are there?
Input on the front. 2 loops on the back: parallel & serial. Direct out, speaker out for an optional cabinet (i have the 4 x 10&quot

- What are the setting controls, effects?...
Clean channel & distortion channel, operated by provided 1 button footswitch or button on front panel.
Each channel has gain, volume, 3 band EQ and reverb.
Master volume is common to both. Effects mix knob for parallel FX loop.
Presence knob on the back.

Weighs about 24 kg so beware it WILL rip your arm out of its socket.
Also, beware this is so loud that it will rattle the handle off if played loud enough long enough...well, it might. It did on mine, and i only recorded one song with it on 10/10.

- Is the general configuration/setup simple?
Yes.

The reverb is nice.

- Is the manual clear and sufficient?...
To do make manuals for amps?

- Does it suit your style of music?
I'm not into metal, so yeah. You can get pretty much anything out of this except extremely clean or extremely wild. Some nice jazzy sounds, and great on rick with the distortion on 5 or 7.
This sounds British & 70's i think.

- With what guitar(s)/bass(es) or effect(s) do you use it?
Godin LGX, sometimes with Ibanez Tube King compressor or distortion.
The compressor alone is enough to boost this real well and you can get some impressive sustain for those Gary Moore solos...

- What kind of sound do you get out of it and with what settings (&quot;clear&quot;, &quot;heavy&quot;,....)?
Depending on the guitar settings & amp settings, you can get close to electro-acoustic or jazzy or dirty on the clean channel, and anything from crunch to good old rock on the other channel.

- What are your favorite sounds and/or the ones you hate?
Don't hate any sounds on this! Most of the time it's quite good, really. It's not high-class, but one would expect worse given the fact it is nothing more than a cheap tube amp.

- For how long have you been using it?
About 8 years.

- What thing do you like most/least about it?
It has a sound of its own & its warm. For that alone i am very reluctant to ever sell this.
I believe that some bands would be jealous of the sound you can get with this thing if you recorded it properly.

- Did you try many other models before getting this one?
I tried the other tube amps that came out at the time: the Fender Blues Deluxe, the Fender Hot Rod, and a Peavet tweed something. This was by far the best. The Fender ones were both horrible, bass out of control and muddy sound. The Peavey was close but it was a 1 x 12&quot; speaker and just didn't match the body on this one.

To get something better you needed to spend twice as much and go for a vintage Fender or Marshall.

- Knowing what you know now, would you make the same choice?...
I have never regretted getting it and it's provided quite a lot of satisfaction.
I would never sell this for less than i paid and i would be very very reluctant to anyway. I would also try many many other amps before replacing it.

Dr Sly's review (This content has been automatically translated from French)

Marshall JTM622 [1995-1997]
4
60 watts tube amp with a clean channel and a distortion channel.
quite heavy, the previous owner of mine had to put intelligence casters, I thank him.

no manual, very simple configuration, two separate settings for distortion / reverb setting clear + (which I put to zero but that's because I do not like reverbs), the clean sound is excellent, and well as distortion ( but I no longer use, now I rather use a boss ds1).

I use it with an Epiphone DOT Studio and a Boss DS1. I play the song and it sounds French punkifiée nickel. at the beginning I used the distortion of the amp but I find it a little too feeble for what I want to play (but that is purely subjective and should be acknowledged that this is a good distortion anyway) where I play with ds1.
before buying it I tried it with various guitars magazin where he was deposit-sale (Telecasters, gibsons ... and even a dobro ozark) and guitars sound great above. Used in concert and rehearsal, it is nickel!

amp not super young but far from senile! it suits me perfectly in rehearsal or concert he fills his role well with the volume between half and a quarter, at home it is rare that I (I leave the rehearsal room) but nothing that 'by playing 0.5 sound is great and stronger, I feel that the building will collapse. if it fits my style, I think it can also adapt to almost any style, her first concert he served throughout the evening to several groups with different styles (noise, rock, ska, punk) and exercised its functions very well so he can be versatile.
in fact it is the amp that I needed to start and I put my vest top el plugging my dobro and this is the fact that the distortion was the only one not do to me larsenner pushed to consider buying.

Fockwulf's review (This content has been automatically translated from French)

It has two effects loops: one series, the other parallel with volume control for both. Spring reverb with level control (not to abuse it, like all spring reverbs). A setting of the presence (very high) is available in rear and is the slamming.

It has two channels: one clean (volume + EQ) that can cruncher and a boost (drive + Volume + EQ) which saturates or crunch. A master volume control allows the overall level of the amp.

Attention, the power transformer seems to be fragile (mine passed away 5 years ago, replaced for € 200 with the lights). Since no worries, despite regular use.

It's very easy to use. The EQ (treble, mids, bass) are quite effective and help sculpt the sound well.

Special mention to the parallel effects loop which allows to superimpose a clear, saturated sound (ala Eric Johnson).

The strength of this amp is the clean channel! there are hints Fenderiens in this amp. Crystal clear sound, a well with a Start or a Les Paul. There crunch in beautiful, very blues, sweet (no need to tube screamer!). It is an incredible transparency: there not plug a guitar or a scratch through or you'll hear all the flaws ...

However, the boost channel is less convincing. As long as crunch, it is very vintage Marshall, but once past the 12 to the gain, it becomes very aggressive, almost Fuzz. It does not really look like the idea that there is a Marshall. Mission almost impossible to have a big sound to Santana. However, it can get very dirty punk or rock, still very sharp and very precise.

If I do note that the clean sounds / crunches, it is 9, if I take into account the distortion fuzz, it falls to 7 Marshall reputation not paid ...

I really like the palette of clean sounds / crunches that suit me perfectly.
It is well suited to the amplification of Pods or other preamps plugged directly into the return effects loop series. Heating of the digital assured!

You really have to drop the bass distortion with this amp. Damage to a Marshall.

The price / quality ratio was good at the time (nine paid about 600 €). I hesitated with Laney and Fender tweed. I do not regret my choice even if other amps make me dream today (Mesa Road King ...).