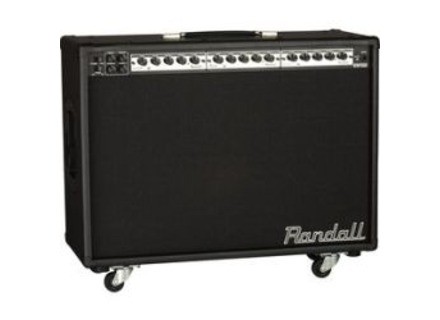 Randall RM100 Combo
5
This is a Randall tube amp. It has spots for 4 power tubes. You can load in two pairs of your fave tubes (whether it be 6L6, EL34, 6550, KT77, KT88, 6CA7) and bias each tube individually taking away the need for professional bias adjustment and allowing you to buy tubes that need not be matched. It can push 100 watts of tube power. It also has 3 preamp tubes (input, phase inverter, and loop buffer) and spots for 3 different MTS modules (anything from Marshall, Fender, Mesa, Orange, etc) which each contain 2 preamp tubes as well. Controls are effects blend, presence and depth controls, as well as main volume. Each module also has gain, volume, and EQ controls. Comes with a MIDI footswitch to select any of the 3 modules.

You can get ANY sound you want from this amp. It all boils down to which modules you want to use. There are 16+ modules available from Randall, another 15+ available from Egnater (MTS designer and manufacturer- Randall just "borrows" Bruce's concept with permission) as well as countless modules available through private modders. In my RM100 I have a Figmods Clean, a Salvation Mods Camerock (Cameron CCV) and a Salvation Mods MarkUS (Mesa Mark IV). At any point I could switch them out to make any combo of preamps I want.
The manual is quite good offering bias instructions and simple directions to help you use the amp to its fullest potential.
This amp can be very loud and as a bonus, you can remove one set of tubes to reduce the output to 50 Watts.

I use single coils and humbuckers with no issues whatsoever. Depending on the modules you choose, you can have any setup you like. My tweed module sounds awesome with my Strat as well as my Paul. This amp is the most versatile amp I've ever owned or played. It sounds better than most I've ever heard.

The only drawbacks to this amp are as follows:
* It's heavy - over 81 lbs
* It doesn't include any modules and they can get pretty expensive = Anywhere from 100 - 550 USD

This amp can deliver crisp cleans through brutal distortion.

I love the versatility of this amp. It is ALL TUBE so it's not a POD or a modeler. The sounds are not just close, they are dead-on in most cases. For under a grand you can have an amp that features 3 of your fave tones without compromise. Sure it's a significant expense to start, but no other amp can offer what this amp does. A great value nonetheless.

I also own several other MTS amps and all are awesome but the RM100 is the king!

I am in the process of collecting many MTS amps so I can't recommend this more. Simply the greatest, most versatile amp ever made. From beginner to touring pro- this amp has you covered. Collect MTS modules to increase your tonal options.

I've tried Spider Valves, Tonelabs, PODs, etc. They all sound like modelers to me- some better than others. The MTS amps sound just like the real thing - all tubes a;; the time!

I can't say enough about this beast.
Did you find this review helpful?yesno
»

Randall RM100 Combo
4
Randall has really taken a hold on the module industry. Them and Egnater have really grabbed the preamp modules and owned the entire market of this industry. You can basically put any type of preamp sound you can think of in this unit, because there probably is a preamp design out there that will do any sound that you want. Now there are builders strickly just for modules.

Honestly this has been such a breakthrough design in recent years. Since there is no much musical influence nowadays , many guitars have influences that go from one end of the spectrum to the other. Finding and amp that can do all of that is pretty much impossible. Well until now it has been impossible.

This is really a preamp shell. There are no tones at all in this amp. You must go out and buy from Randall or Egnater the preamp voicings that you want. You have three options to put in the slots provided. Randall has built just about any preamp module you can think of. So it can take come exploring and trial and error to find the right one you want for your sound.

One of my favorite modules is the Mr.Scary from George Lynch. I really love that module a lot. It is thick and fat sounding and turns even the most ordinary guitar into a shredder. If you don't like the preamp module you can always dump it and try something else and a minimal cost. Guys on the internet are always buying and selling modules to find that sweet spot in their guitar rig.

One great thin that is offered in this shell is the depth control. I wish Marshall and other amps would start putting this standard on their amps. So much of time I find trying to nail that low end which can be absent from a lot of guitars. The shell has the density knob which is basically the same thing.

At new these amps come in at around $1500, which isn't bad for a shell power amp combo. You can pick up modules for around $200 to $300 depending on which one it is. They are sort of about the price of a good stompbox pedal so I guess you could look at it this way. You generally add pedals to an amps so you are adding preamps t your power amp.
Did you find this review helpful?yesno
»