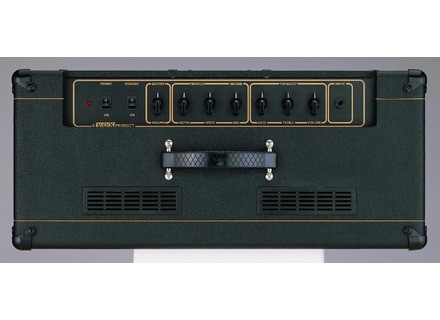 Vox AC15CC1
5
The Vox AC15 is a 15w, single channel all-tube (three 12AX7 preamp tubes and two EL84 tubes to drive a single 12" Celestion G12M Greenback) amp. It has a external speaker input switchable between 8ohm and 16ohms, with the purpose of powering an external speaker cabinet, and another extension speaker jack, which can be used to run another 16ohm cabinet along with the internal speakers, to get a more powerful sound. It also features tremolo (with depth and speed controls) and reverb, both of which are also switchable but via a two button foot switch. This amp offers two channels: Normal and Top Boost. Each channel has its own volume control, and the Top Boost channel includes Treble and Bass tone controls. Even if it's only a 15w amp, it can get surprisingly loud, not enough to fill an arena but for small venues it's ideal. The Vox AC15 is perfect for genres like blues, rock, vintage music and indie because of its classic tube tone.

A great thing about this amp is that it's very easy to get a good sound without the use of pedals. The reverb and tremolo sound amazing and organic. I hardly use tremolo or reverb pedals when using this amp. It's important to learn how to use the Master Volume control along with the individual volume controls, especially with the Top Boost volume knob. To get a powerful tone I put the Top Boost volume to the top and then use the Master volume control to adjust the gain. This way I can make sure I get the best overdrive tone out of this amp, which, as I stated before, can get extremely loud for its 15w. In the studio we crank it up to the limit to record high gain guitars, and they sound amazing in the mix, powerful, warm, and aggressive.

One great thing about this amp is its versatility, You can have a clean, sweet sounding tone, but when you crank this amp up to the limit you can get an unbelievably loud and overdriven tone, thanks to the 12AX7 preamp tubes and two EL84 tubes it offers. I use it with a Fender Telecaster and it sounds amazing, when you attack with a pick you can really feel the crunch and power of this amp. I used to own a Marshall amp (which exact model I can't recall) which costed me approximately as much as the Vox AC15, and it's really nothing like this one, in terms of tone quality, versatility and over-all sound. The Vox AC15 is my favorite amp for recording almost any guitar. Since I don't play heavy metal or anything like that I don't need that much gain, if you play anything heavy that requires more power perhaps this is not the amp you need. However with the help of pedals you can still get more punch.

What I like the most about this amp is the tone, versatility, and quality of sound. It also is perfect for the music I play.
I think the price is very reasonable ( I paid around $450) and it's so durable that if you buy it used it will probably sound awesome too. I tried some other amps before, like Marshall and Fender, and even though I liked the Fender sound too, the tube sound of this amp captivated me. I definitely would buy again if I needed to, and I highly recommend it. In conclusion:

Vox AC15CC1
5
Much like its older and more sophisticated brother the Vox Ac30 the Ac15 packs a nice punch as well. The Vox AC15 has a fantastic tone similar to the Ac30 but with only one speaker. You will have all the great features and tone, but it will come in a much smaller compact size.

I think of the Vox Ac15 as a little practice amp that can do all the same tricks the Vox AC30 can do. I don't find the AC30 to be very difficult to carry around so this wouldn't be a reason that I would ever buy an AC15. I wouldn't need to lighten my load, but I find that Ac15 is a more suitable backup amp or recording amp. Since many studio have limited room I think the Ac15 would accompany that type of situation quite well. This is just my personal opinion and doesn't reflect anything from Vox. I just think the Ac30 is the perfect pop and mild rock amp in the world and cutting the speaker and output in half is kind of pointless.

The Vox AC15 sounds just as good as the Ac30. The benefits you have is cranking the thing up to get distortion is a little easier since it is half the wattage. It is smaller and portable which fits nicely in small spaces.

I'm more of an Ac30 guy so I would never buy an Ac15. The quality and features are all the same. You just get a smaller cabinet and one less speaker. Well you get two less power tubes as well

I would recommend this amp to anyone who needs a smaller version of the Vox Ac30. At new it comes in at around $600 which is a decent price for something like this. A nice tube amp that sounds very classic. The only bummer about this amp is...its made in China!
Did you find this review helpful?yesno
»

PurposeToMelody's review"Best Amp For clean and Medium gain tones in its pricerange. "

Super easy to work, not many buttons and switches. Plug in and GO. and you will not look back.

I used mainly a Les Paul with Seymour Duncans in it and a 90s MIA strat.
Clean:
The Clean on this thing is seriously pretty much unbeatable. It sounds good pretty much anywhere. Running it with the strat was pretty much instant "Run To You" by Brian Adams tone, which was pretty sweet, and if you want the whole Hillsong Worship type tone this pretty much does it in spades with a gretstch style guitar.

OD: Once you get the volume up past about oh say, 10 o clock it starts breaking up, especially with humbuckers...and my gosh is it glorious. very lush warm sounds. You want the beatles? it does the beatles...you want Brian May? you got it (with a treble booster and maybe an OD). On the contrary though, this is the biggest downfall of the amp, it has a very small sweet spot on the gain and its either too muddy or not saturated enough (for my tastes). It can also definitely do with a tube change out of the box as the stock tubes are pretty gross sounding.

The tremolo is great, very warm and making it footswitchable was a great idea...the reverb was a bit much though, it gets to big too fast, pretty unusable.

Overall, I love this amp for anything low gain clean and up to medium gain, in its price range you can't beat it for 60s rock tones or modern worship band sounds, I highly recommend this amp to anyone looking for things like that. overall I'll give it an 8 .
Did you find this review helpful?yesno
»

Vox AC15CC1
4
The Vox AC15 CC1 (Custom Classic) is a tube and valve based combination amp, delivering 15 watts of power, as the name states. The speaker is a single 12" that is a custom made Vox speaker. The amp has a single 1/4" input and has both built in reverb and tremolo.

The make up of the Vox AC15 CC1 is very straight forward and easy to follow. The parameters are ones that are often seen on many other amps, so if you're familiar with other guitar amplifiers, you'll definitely recognize a lot of the controls going on here. There is an initial volume knob, as well as EQ/tone knobs for both bass and treble. For the effects, there are parameters for reverb level and tremolo depth and speed. There is also a master volume knob and a stand by button. I don't think that a manual is necessary as everything here is pretty straight forward, but I can't speaker about the make up of the manual as I haven't had a need to look at one.

The sound of the Vox AC15 CC1 will be very familar to you if you have experience with other Vox amps, like the classic AC 30. While the AC15 doesn't sound as full as the AC30 does in my opinion, it still has an overall very respectable sound quality, and can actually pack a lot of punch for its size and wattage. I've used the amp primarily with a Fender Stratocaster, and I definitely felt like the true nature of the Strat came through the amp. I think that it can be used under a variety of circumstances, including for recording and even live shows in perhaps a smaller venue...

The Vox AC15 CC1 is the perfect little amp for the player who isn't looking for something incredibly loud, but still wants a nice sounding amp with a good amount of control, and of course at least somewhat tube based. The price of the AC15 is perhaps a little bit much considering the wattage, which is really my only complaint about the amp and I would have definitely rated it higher if it was even the slightest bit less expensive. Even so, I'd definitely encourage those interested in Vox amps and/or smaller and medium sized quality guitar amplifiers.
Did you find this review helpful?yesno
»
Read the 21 user reviews on the Vox AC15CC1 »

Vox AC15CC1 manuals and other files