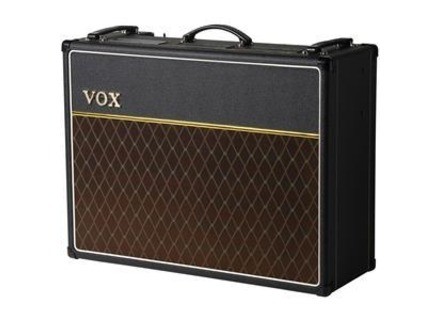 Vox AC30C2X
3
This was the first Vox amp that I had ever bought. I was big on U2 at the time and wanted to get the amp that the Edge was using. He had a vintage AC30 which I wasn't about the slap down $4000 to get one from the 60's, so I opted for a reissue unit. I have to say this unit wasn't that bad at all tone wise.

It was made in Chine which I didn't check before I bought it, otherwise I wouldn't have got it. I would have bought an a few year old one that was still made in the UK. Buying a cheap manufactured Chinese made product that was once made in Europe or even anything made in the US now in Red China goes against everything inside me. So shortly after buying it I dumped it very quickly.

The sound I got from this amp wasn't bad at all. I wasn't used to Vox's at the time and the EQing was a little different then the Fender or Marshall front panels. After some use I got the hang of it.

I mostly used this with overdrive pedals and delays. I never turned this thing up to get that cranked Vox Ac30 tone famlliar with Brian May or Tom Petty. I mostly used a Ibanez TS9 and a TC Electronics G Major with this unit. I got some good pop and mild rock tone with it. Never was I going to get a Slash or hard rock tone. It just is not capable of doing that. Even with a Les Paul I was able to get a good classic rock tone similar to some U2 songs. After I felt that the Vox wasn't my thing and of course Chinese made I dumped it for a Marshall.

The tone from the amp is decent but I would never buy this thing again. If I ever got another Vox I would get a reissue UK made or plunge for a vintage unit. At new these units run at around $1500 and that is a lot for something made in China. You can get an older one made in the UK for that price and you can keep your integrity.

I wouldn't recommend this amp to anyone. Save you money and buy a used UK made one or get a clone amp made by Hayseed Amps.

SergeantDixon's review (This content has been automatically translated from French)

By against the weight of the beast: 33.4 kg ouch back!

Amplifier easier than it not possible (except small 5W), it is far from gasworks present, it is the former.
The manual ... useless ears are there for
Sound good ... if you like the sound Vox and if you can push the beast ... much!

So then, what to say, it is simply magical. It's dynamic, it's brilliant is british!
The normal channel is polished with heat and softness as a request in Vox.
The top boost is simply magical, more bright and more aggressive, hot and greasy for the little one pushes the preamp.
Personally I do not play nearly as the top boost, volume thoroughly to enjoy the natural saturation lamps.
I push the master about a quarter to enjoy a minimum potential of the amp, plus my ears explode because are really 30W 30 Watts GOOD!
I play with a Gibson SG Standard that allows me to get good saturation and 70's touch to the sound of Led Zeppelin and Cream for a good touch of psychedelia.
I also use a Fender Stratocaster Standard Mexico with Noiseless SCN pickups and gentlemen Gilmour and Hendrix are opening their doors.
I mainly use an Ibanez TS-808 to boost the saturation of the amp, and it's hot, it's sooo bluesy!

I use this amp for 1 year now, he gave me that happiness.
I had a Fender Frontman 212R before, the day and night! =)
I tried a Hot Rod Deluxe and the model of the Celestion Greenback AC30.
I found the Fender clean too, I like the light that twist and good crunch, channels of saturated fender, bof is messy.
The AC30 is another good too, but you can feel the difference Alnico Blue that bring even more heat on the sound!

I paid € 1250 on Thomann, yes it is expensive but when you love (and that means to be realistic too) it does not matter, and I do it again this choice without hesitation!

defrath's review (This content has been automatically translated from French)" Vox AC30C2X or power Bulldogs blue ..."

This amplifier offers a typical Vox sound very British and vintage. It is very easy to get a good sound.
The 30 watt amp is this monstrous, I do not push the master volume to more than a third under penalty no longer hear the Fender Hot Rod the other guitarist in my group. Another small downside, the weight of the beast, 33kg it can not move it each time failing to take a abonement anual from your physiotherapist.
Two Celestion Alnico Blue Bulldog 12'' provide very good dynamic and good sound dispersion. Both channels are good but require pedal AB Box if one wants switcher from one to the other.

The normal channel is very warm with lots of low and medium high. It is ideal for a clean typed a pretty good crunch or overdrive. Cranked up to a distortion will be small and quite compressed. The top boost channel is more aggressive and quickly crunch. It can be really excellent sound lead but hope not reach extreme distortion and ultra modern, this amp is not made for that. I like using both channels together by bridging the two inputs.
The reverb and tremolo allow sculpt the sound in interesting ways (consider purchasing the Vox pedal to engage VFS2A foot).

I have this amp for almost a year now. I used to play in a group after a time his little brother used Vox AC15. We play mainly rock in the broadest sense from tickle also hard at times.
The amp is quite expensive but really justifies the investment. We can still regret that for an amp of this price, there is still a need to buy a box and a crank AB VFS2A foot in order to control the different channels and built in effects.