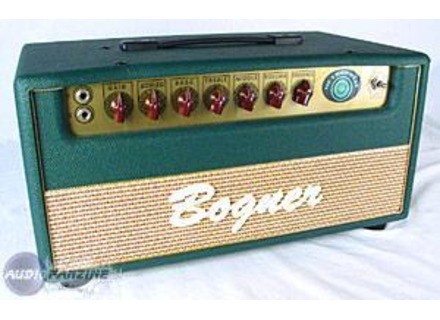 The configuration of the Bogner Metropolis Head is generally pretty simple to follow. If you know a little bit about guitar amps, nothing will be hard for your understand here, as all of the parameters are pretty standard. You've got knobs for gain, bass, treble, middle, volume, presence, and reverb. As you can probably tell, this is a very common configuration, so I don't believe that users will need a manual to use the amp.

When it comes to guitar amp heads, I've used a lot of them, and the Bogner Metropolis Head is honestly one of the best that I've heard. I've used it with a Gibson SG and a Fender Stratocaster, both of which are pretty different sounding guitars. For the recording sessions that I used it for, I got a killer tone with of the different guitars. The Metropolis head has a serious amount of girth and a ton of grit. It has one of the thickest tones overall for any guitar amp head, let alone one with 30 watts of power.

I first used the Bogner Metropolis Head about six months ago, and was pretty much instantly impressed with the way it sounded. It is possible to get all sorts of different types of guitar tones with this amp, depending on the way you set your parameters of course. The Bogner amp will not cost you a small amount of money, but for those players looking for a high end boutique guitar amp, it is definitely worth it as you're simply getting a great amp. Although I can't afford a Bogner Metropolis Head for myself, whenever I'm able to I will use it without a doubt!