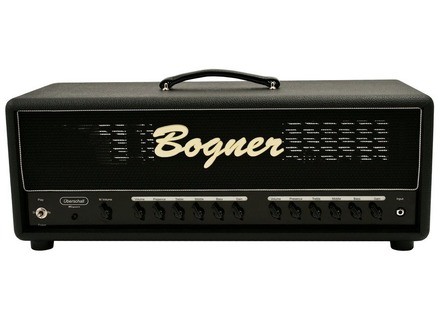 Bogner Uberschall Revision Blue
5
The Bogner Uberschall rev blue is a two channel, 120 watt amp with a lot of punch and dynamics. It comes with a footswitch for the channels and tube buffered effects loop which I found quite useful. Mine has El34s and six, count em, six preamps. At least one is the loop and I think one is for the clean but lots of tubes as it should be.

While the amp comes with a clean and gain channel, the star of the show is definately the gain channel. The controls are easy to use and vary basic and all very functional with good range.

As I said above, the gain channel is brutal and just makes you want to play brutal tones all night long. It has a nice chewy midrange with just the right amount of bottom. I always say it sounds like what you wish a Marshall would do at times. I don't think it is too far off to say it is actually slightly Marshallesque in the tones you can dial in. Absolutely love this amp. I had this in an amp off with a Herbert, VH4, Twin Jet, Splawn Nitro and assorted Marshalls and it was right there with the Diezels as far as chunk and it might have been the warmest sounding amp there to be honest. I know the Diezel owner was impressed and wanted to buy it afterwards. As for the clean channel, it is useable but is just ok as cleans go. With some effects, it becomes better. You could get away with this amp doing metal and classic rock, it can do both for sure. Looks great with add on metal grill as well. This is like a $250 feature but I like it better than the cloth grill.

Overall, this is one of the best amps I have played. Bogner got this one right and the Rev Blue is a keeper for sure. Powerful tones, chunky mids and searing lead tones make this hard to beat. Does modern and classic metal and rock with ease. You never say you wish it had more snot because you can take it to the limit and then some. I have tried some of Bogner's latest attempts, like the Twin Jet and I can honestly say this amp blows that away. Mine came loaded with Tung Sol preamps which I think go well with the Uberschall and make it thick and chewy as it was meant to be. Effects loop works great and footswitchable which makes gigging it a snap. Would highly reccomend this amp to anyone who has never tried one.
Did you find this review helpful?yesno
»

Dialing this amplifier in is quite simple due to its minimal features. Because of this, it is also not nearly as versatile as others heads in its price range; you either love the tone it puts out, or you look elsewhere. The dials are quite interactive, especially with the presence knob, and its effects on the other frequencies, but more on this in the ‘sound’ section. I have found that the Bogner power amp (accessed by plugging into the effects return) works GREAT for external units such as preamps- MUCH better than other amplifiers I’ve tried this with. The effects send level knob is a welcomed addition, allowing the loop to be compatible with a wider range of effects. External bias points make retubing much less of a hassle aswell!

The Revision Blue offers a few changes from the previous revisions based on general consensus of the amplifiers. The clean channel is slightly revoiced, with level bumped up to balance the two channels more easily. It is slightly brighter, but still maintains its clean characteristics. The gain structure of the blue is slightly different, with a brighter and slightly harsher response. Due to this, the amp cuts more easily in a live situation, but this is at the cost of the depth that made the prevision Revision 2 so unique. The amp tracks a little more quickly, and also lends itself to lead tones a little more easily. As with any amplifier, these things are entirely based on EQ settings, but the general tonestack of this revision makes it less hassle to obtain a lead tone.

The Revision Blue is not better or worse- it is simply different. Those that tune their guitars WAY down may like the brighter and tighter response of the amp. This does sacrifice some of the depth I was used to from my Revision 2, though the Uberschall in general has so much that you may not even miss it. I still find the Revision 2 to have a slight edge, but tone is very personal. Again, another amazing amplifier from Reinhold Bogner!
Did you find this review helpful?yesno
»